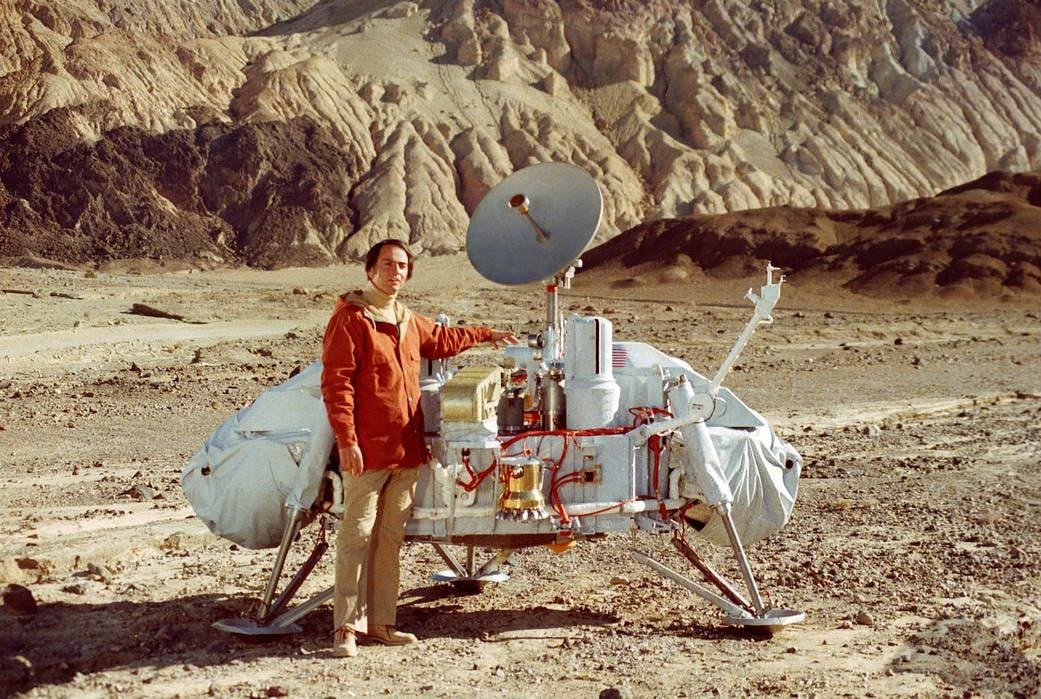 The late planetary scientist, astronomer, and Cornell University author Carl Sagan was not only a masterful science communicator, but had a knack for pushing humanity to think in innovative ways. His experiment to remotely detect life on Earth from NASA’s Galileo spacecraft is legendary. And we’re still debating the results of the astrobiology experiments Sagan championed on NASA’s Viking landers to Mars. But a quarter of a century after his death, it’s hard not to wonder what he would think of the current state of space exploration.

Either way, I think Sagan would be extremely perplexed and ultimately disappointed with what the United States and its space allies have yet to accomplish on three major fronts.

First, we have yet to find evidence of life on Mars.

Granted, rovers have given us tantalizing reasons for hope, but with each new twist on the possibility of ancient or even existing water on Mars, the potential for astrobiology on the Red Planet becomes more complicated.

“According to the standards established before the launch, two of the three [Viking] microbiology experiments had a positive result – if comparable results had been obtained anywhere on Earth, the existence of terrestrial microbiology would have been taken for granted,” Sagan wrote in a special 1979 issue of Michigan Quarterly Review. “But Mars is not Earth and especially soil chemistry, bombarded by ultraviolet light from an ozone-free sky, may be very different on the Red Planet than it is here,” he writes. .

In truth, we’ll have to wait for NASA’s Mars sample return missions to clear up the controversy surrounding the fact that Mars may once have harbored microbial life.

I also think Sagan would be bitterly disappointed that we humans still had one foot on the red planet.

Second, even if Sagan were aiming further, I also think he would be disappointed that it has been over 50 years since astronauts have walked on the Moon.

Granted, NASA plans to send astronauts back to the Moon by 2025. But I’m sure it would be hard to find even the most optimistic oddsmaker in Vegas to accept the bet that NASA astronauts would walk in done on the lunar south. Pole by then. In fact, the much-vaunted 2024 landing date has already been pushed back a year.

And finally, in terms of astrobiology, Sagan would like the progress we’ve made in characterizing extrasolar planets. But I think he would be bitterly disappointed to see how far we have to go to establish radio contact with potential extraterrestrial intelligence.

If Sagan were alive today, I’d bet he’d be advocating whole new ways to search for extraterrestrial intelligence in ways few of us could have imagined just a few decades ago. Sagan would likely emphasize new ways to search for exo-civilizations in the optical spectrum and likely embrace the new science of searching for evidence of extrasolar civilizations via their own technosignatures.

Although Sagan has been an avowed advocate of robotic exploration of the cosmos, I wonder what he would say about our continued seeming lethargy to send humans beyond low Earth orbit and cislunar space.

“Before you go looking [life] elsewhere, we must be certain that we can identify life from space,” I noted in my 2001 book Distant Wanderers: The Search for Planets Beyond the Solar System. In 1990, [Sagan] led a team that used the Galileo spacecraft and NASA’s atmospheric probe to prove that life here on Earth could be detected from space. In December 1990, spacecraft sensors detected an abundance of oxygen gas, ozone levels more than 20 times normal for a lifeless planet, and methane at levels of one part per million, about 140 times more than expected with no underlying biological activity, I noted.

But detecting life by spectroscopy on a distant planet is no small feat and with each passing year, a whole new generation of astrobiologists are continually finding reasons why astronomers might detect false positives in a planet’s spectra. similar to the Earth surrounding a nearby star. And one wonders what Sagan himself would have to say about such prevarication. Would he say enough already? we are too cautious in making judgments about the search for life at a distance? Or would he wholeheartedly support such careful thinking?

I can’t answer that. But without Sagan and others like him nudging us to think outside of our narrow astrobiological paradigms, finding evidence for life beyond our own Earth will continue to be nearly impossible.