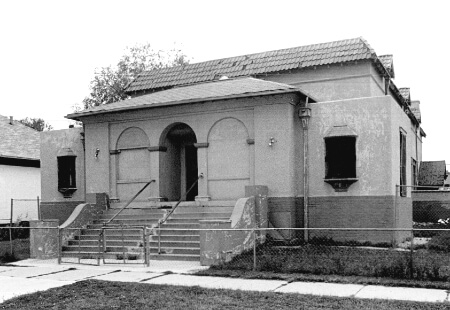 A The grassroots effort to create an official historic district on Denver’s west side, where much of Denver’s Jewish community began, will enter a crucial phase on Wednesday, Nov. 9, with the first in a series of public meetings to discuss the neighborhood’s potential impact on those who live there today.

The Labor Lyceum, later the home of Zera Abraham, photographed in the 1980s. (Bob Weinberg)

A citizens’ committee advocating for the creation of West Colfax’s Jewish Historic Cultural District will host the forum at the VFW Pavilion at 4747 W. Colfax Ave. at 5:30 p.m.

The area’s history as a seminal home for Denver’s Jewish community will be discussed, as will places of historical significance and how the creation of a historic district can affect topics such as neighborhood property values ​​and home renovations.

“We want to get a sense of what the neighborhood thinks about having a historic neighborhood,” resident Pam Smith told the Intermountain Jewish News recently.

Smith describes herself as “the connector, the person who makes phone calls and sets up meetings” for the committee, which includes a handful of current West Side Jews, city councilors Amanda Sandoval and Jamie Torres, Historic Denver, the Denver Landmark Commission and Rabbi Mordechai Fleisher of Cong. Zera Abraham, the only remaining synagogue in the neighborhood.

“We’re going to have a series of meetings, monthly for a year, to help people understand the nature of a historic district and how it will affect them and their homes,” Smith added.

“We will give them plenty of time to share their thoughts and concerns about their home values ​​and other issues. Answers will also come from Denver Landmark Commission staff.

A film narrated by Dr. Jeanne Abrams of the Rocky Mountain Jewish Historical Society will be shown at the Nov. 9 forum.

Jhe campaign to create the district began about five years ago, Smith says, and has since raised some $20,000 from Historic Denver, the City and County of Denver and the Rose Community Foundation to prepare for the current phase. of public discussion.

Most of those funds were used to pay for an initial nomination proposal by Fort Collins-based Tatanka Historical Associates, whose president Ron Sladek wrote, “Preparing a historical nomination for an urban district is a complicated undertaking that involves field documentation, archival research. , contextual development, architectural assessment and analysis of historic sites, buildings, structures and objects.

The proposal outlines how the district would encompass three geographic areas on the west side, ranging from Sheridan Blvd. west east of Federal Blvd.

The western sections overlap the northern and southern corridors along West Colfax.

The eastern section, south of Colfax, includes areas near present-day Empower Field at Mile High, home of the Denver Broncos.

The east section represents one of Denver’s earliest Jewish neighborhoods where, in the second half of the 19th century, many Eastern European Jews settled, forming synagogues and businesses in an area often referred to as “Under the viaduct”.

Few physical structures representing this neighborhood still exist today. The typical very small house in which the late IJN editor Max Goldberg grew up on Paul Court is now the site of a water facility.

The western sections represent areas to which Jews have migrated in recent decades, establishing a close-knit community that ranged from haredi from modern Orthodox to secular, with a strong Yiddish cultural character.

A number of structures that originated in this neighborhood remain standing today, although some of them no longer have Jewish ties.

Tatanka’s proposal lists a total of 21 structures on the west side to be considered for designation as landmarks in the proposed neighborhood, including:

“The most exciting part for me,” Smith says, “is that we hope to not only preserve the buildings but also the stories of the West Side.”

While what remains of the West Side’s Jewish community today is its Orthodox Jewish community, the committee welcomes the participation of all streams of Judaism in its efforts to preserve the neighborhood’s Jewish history.

“We would like to have as many people as possible to tie all of these stories together and preserve the history of the neighborhood,” Smith said.

After a year of monthly meetings, surveys will be provided to current residents of the proposed neighborhood to determine if they are in favor of the plan.

Chris Leppek can be contacted at [email protected]

How to hire the Amish for a project in New York