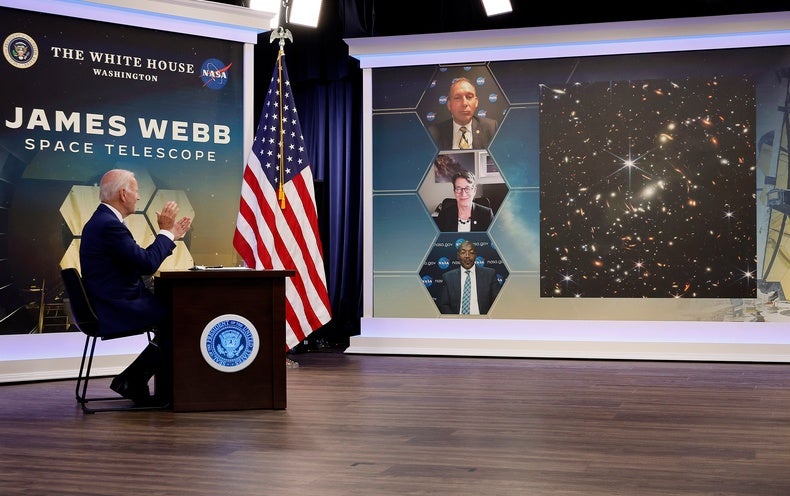 Children are scientists in a primordial world. During these first years, they will learn the laws of gravity, the shapeless flow of time, the first principles of love. Everything must be discovered, from peanut butter to thunderstorms, and everything might as well be magical. And then, as the children get older, the magic is stolen from them. It’s slow for some, and faster for many who feel the weight of skin color or bank account balance. The vibrant world is desaturating. The tooth fairy was a lie, days are long but life is short and dreams are harder to come true than advertised. We become unimpressed and disappointed. We disconnect from life on Earth to inhabit small rectangles of glass, the screen of our new horizon. This magical world is fading away.

Each passing day brings fewer things to discover, except for a few rare moments. Today is one. As President Joe Biden unveiled during a special White House presentation, the James Webb Space Telescope (JWST) has now seen light from the edge of time, providing the deepest infrared view of the cosmos. Captured by directing JWST’s lingering gaze to a region of space known as SMACS 0723, this triumphant first image shows starlight in its infancy and galaxies merging from primal chaos. We, that is to say not only NASA and the European and Canadian space agencies, but also humanity as a whole, built the telescope to tell the story of the cosmos in the making, and we are all part of this story. Yet, in the midst of so many more pressing battles on Earth, whether viral pandemics, invading armies or rising oceans, it is worth asking if there are other reasons for build telescopes and why we fund expensive pursuits of celestial discovery.

I believe it’s to search for the magic that we’ve all lost. We build telescopes, probes, and rovers because they’re pencil-drawn by kids all over the world whose beds are spaceships. NASA shows them that the ships are real; because we have flew over the surface of Pluto, returning images that will be pasted on the walls of bedrooms all over the world. Telescopes show them that amidst the iniquity and hardships of life on Earth, we can point the glass to the dark and find realms of stars and citadels of light. Children will paint nebulae with brushes dipped in all colors. They’ll wonder what wonders lie within, how big Earth is in comparison, and whether there might be alien worlds forming around these infant suns.

A child will be inspired to pursue science because this new image from Hubble is not just a galaxy but proof of nature’s magic. They will grow, learn, teach and build microscopes, telescopes and particle colliders to show the next generation how we wrest meaning from the relentless march of time. Transformative science is almost beside the point. Wonder is the engine of human progress.

And of course, there are good arguments for why telescopes are investments in national leadership and security. We’re building them to spot that deadly asteroid that may already be on its way to Earth. We build them to push outward on what new and evolving technologies enable, to present challenges overcome by human ingenuity, and to spark inventions with multiple and lasting benefits. The construction and use of ground-based and space-based telescopes is a decades-long bridge for our nation, with benefits in every state. They prevent the evaporation of the talented national workforce and transfer vital technical knowledge from one generation to the next. And powerful telescopes are among our most profitable investments in sweet power. It’s that fleeting thing that nations collectively spend billions on: the idea that the best propaganda is not propaganda, as Joseph Nye says. These are hospital ships filled with food and water, or the first image of a black hole on the front page of newspapers in Moscow. It is understanding that true global leadership is not forged by forcing other nations to follow the whims of an empire, but rather by finding ways to work together for the collective betterment of life on Earth.

The launch of JWST lifted weary eyes to the stars last December. It was a moment that reminded us of a world united in awe, watching Apollo 11 in 1969. Few people now describe the mission as two humans setting foot on the moon. They say we landed on the moon. All of us. A giant step. It is because the pursuit of discovery is mortar for a fractured society. Today, let’s say we’ve built the telescope that amazes our world.

JWST brought us the first light of the cosmic dawn. We must now act to ensure that this is not the twilight of our ability to explore it. Ground-based astronomy is in peril, faced with shrinking budgets and crowded sky. By 2045, our fleet of space observatories will have passed its most optimistic lifespan. Our era of cosmic discovery will have ended and the United States will cede leadership to other nations. But it doesn’t have to end like this: a new report from the National Academy of Sciences presented a bold vision for the future of discovery. He recommends building a new fleet of Large Observatoriesin the same way revolutionary new telescopes on Earth, in an urgent national pursuit of what would be the greatest discoveries in history: How does the universe work? How did we come here? Are we alone? Yes, it will take modest annual growth in the budgets of the National Science Foundation and NASA over the next decade. But these will be investments in wonder; a promise to the next generation of explorers that nature is as magical as they once believed.

You can barely see the stars from most cities these days. They are obscured by light-polluted haze and mistaken for swarms of satellites. The children look up and wonder what is behind it. We build telescopes to show them and bring magic to their hearts. We build telescopes to look at all those distant worlds and decide that ours is the one worth fighting for. Telescopes teach us to find a signal in an age of noise. Looking in the dark and finding so much light within.

This is an opinion and analytical article, and the opinions expressed by the author or authors are not necessarily those of American scientist.