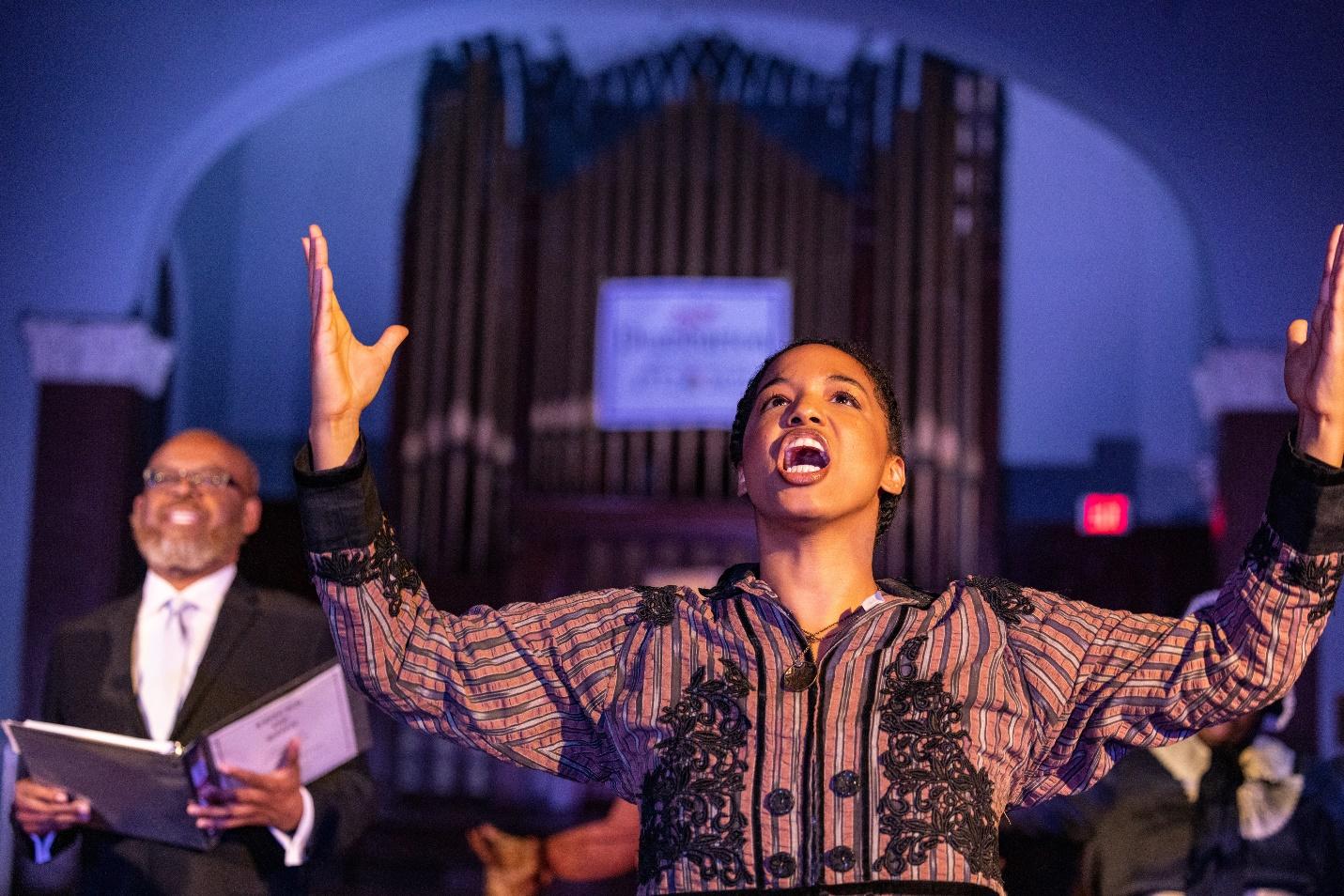 Before gentrification and discriminatory public housing policies plagued Georgetown, before the neighborhood became synonymous with white wealth, waterside picnics along the C&O Canal and cupcake tours, before developers attempt to dig up bodies in black cemeteries and build more townhouses in their place, Black Georgetown buzzed with resistance.

Georgetown, a historically black tobacco and shipping port, once carried the weight of the worries and dreams of freed slaves on the Underground Railroad. The neighborhood is also the site of the nation’s oldest African-American cemeteries and DC’s oldest African-American congregation; it was the district’s first historic district and was home to many free, freed, and enslaved black people. Its roots are quite significant.

In Voices of Zion: The Georgetown Black Cemeteries Projecta theatrical performance mixing opera, musical comedy and church gospel by Alliance for New Music-Theatre, artistic director Susan Galbraith challenges viewers to “dig deeper” to discover the lives of Washington’s ancestors. The production, which moves from Mount Zion Cemetery to Dumbarton United Methodist Church depending on the weather, makes full use of its surroundings, incorporating scenic movements and tweaking character lines to complement either of its settings. historical. Lisa Fagerplaywright and executive director of the Mount Zion/Female Union Band Society Historic Memorial Park, lends her experience to ensure the stories are true to life and death.

Galbraith draws from Georgetown’s black roots to expose love, loss and freedom through the well-known Georgetown couple’s physical and spiritual journey Alfred Pope (a dynamic Djob Lyon) and Hannah Pope (vibrating soprano Ayana Ogunsunlade). But they’re not the only historical figures to lend their vibrato and presence to the work, which also features additional strong characters that help the duo find their footing.

Again, background is crucial to understanding how far the popes go: before Alfred turned his scavenger labor into savings that eventually led him to own five single-family homes with five buildings in Georgetown, before testifying before Congress on whether Georgetown and Washington City should merge, before he and Hannah became so active in public affairs and community development, Alfred was a lost soul.

Equally important are the afters: Alfred was one of 77 slaves to board The Pearl, in what was the largest recorded (unsuccessful) non-violent escape attempt by slaves in the country.

When the lyrical musical begins, Alfred has just been forced back into slavery under the South Carolina Congressman. John Carter. When he and Hannah are freed after Carter’s death, Alfred isn’t quite sure how to be free.

Unless you’re familiar enough with DC Black’s history to be in the weeds (or roots) already, these before and afters elude you until the end-of-show community conversation. You only know that Alfred yearns for a sense of personality and home, and Hannah, kneeling and sobbing, clings to the hope of finding her dead children. Hannah’s tunes skip over imaginary tombstones as she mourns the deaths of her children.

On a stormy Friday night at one of the district’s oldest churches, Georgetown’s Dumbarton United Methodist, with rain that feels scripted, the production takes you to that quintessential moment: Alfred and Hannah, desperate and embracing at Mount Zion cemeteries. , at the start of their quest to figure out who they are as newly liberated people.

Their guides to finding freedom and identity have some nerve. Mary Beckett (Sheri Jackson) and Mary Billings (Cara Schaefer) deal with the inherent tension of Billings, a white woman savior figure, suddenly appearing in a black-only space. Through Billings, we glimpse an abolitionist and educator’s journey to find community acceptance where she eventually teaches black children in her home. Their song vocals push themes of empowerment (“Isn’t My Money Good as Any Man’s?” is salient with the trio of Jackson, Schaefer and the cool Pink White playing Mary Burrell).

Charles Turner (Dr. Lloyd Mallory), once known as “The Black Mayor of Georgetown”, is a calming force with a knack for calling people together. He takes issue with Alfred’s decision to stay on the balcony of the church, where black people had to sit in pre-war times, rather than sit on the pews downstairs. And he brings the community together to sing and chant freedom – inherent acts of resistance – throughout the musical work and into the purple twilight of the final scene.

The Female Union Band Society represents a group of free black women who, in 1842, pledged to support each other “in sickness and in death”. Their plot of land was part of Mount Zion Cemetery. In Voice of Zionthe FUBS chorus (Bernie Alston, Pamela Carter Coleman, Ayanna Hardy, Yvette Spears, Patrice Underwoodand Jacquelyn Vaughan) are a group of sighs, stomps, and support. They bring flair, hype and vocals to elevate community songs and soften the popes’ dark moments.

Burrell is not only one of Hannah and Alfred’s trusted guides, but also ours: his explanatory notes on historical figures, while too didactic for some, are nonetheless useful. Burrell illuminates the shadows of the reimagined church theater. His diction, clear as church bells, constantly reminds you of the spelling (and misspellings) of his last name. This running joke also shines a light on the black resident erasure that still plagues DC’s oldest black cemetery. Her “she’s fine” – referring to Billings – paves the way for acceptance of the white woman. Burrell’s voice is a booming character (White’s work as a motivational speaker might have something to do with it).

The songs too. Composed by a student (and organist at Mount Zion United Methodist Church), Ronald Walton IIIwith lyrics by Jarrod Leeand led by the iconic composer, arranger and multi-genre musician Evelyn Simpson Curenton, the musical arrangements link memory and loss as major motifs. For Galbraith, who recounts city ​​paper by e-mail that, as early as the 1830s, “people of color made up as much as 40% of the community, a good proportion were free or liberated and determined to liberate others”, the memory of Black Georgetown is transmitted most honestly through music. The accompaniment of the Dumbarton Choir certainly helps.

The music (and the wardrobe of Monique McKenzie) transports you to the Mount Zion Cemetery Church and Vault which also serves as a hideout for the Underground Railroad; it also recreates a love story that resists a narrative of single-plane struggle. “How much?” is Jackson’s haunting ode to black residents who have fallen and will fall before they are freed from oppression. A unique rendition of “Amazing Grace” sets the final tone, the return of a once-lost, now-found Alfred after an epiphany, where he too will “fight for Zion.”

“Until we are all freed, none of us will be freed,” Turner tells the congregation on stage and off, to the people of Georgetown and not, lost and searching.

Voice of Zion, directed by Thomas W. Jones II with musical direction by Evelyn Simpson Curenton and art direction by Susan Galbraith, runs Fridays and Saturdays through May 21 at Mount Zion Cemetery, weather permitting. The final performance is on Memorial Day, May 30. In the event of inclement weather, performances will be held at Dumbarton United Methodist Church. newmusictheatre.org. $35.