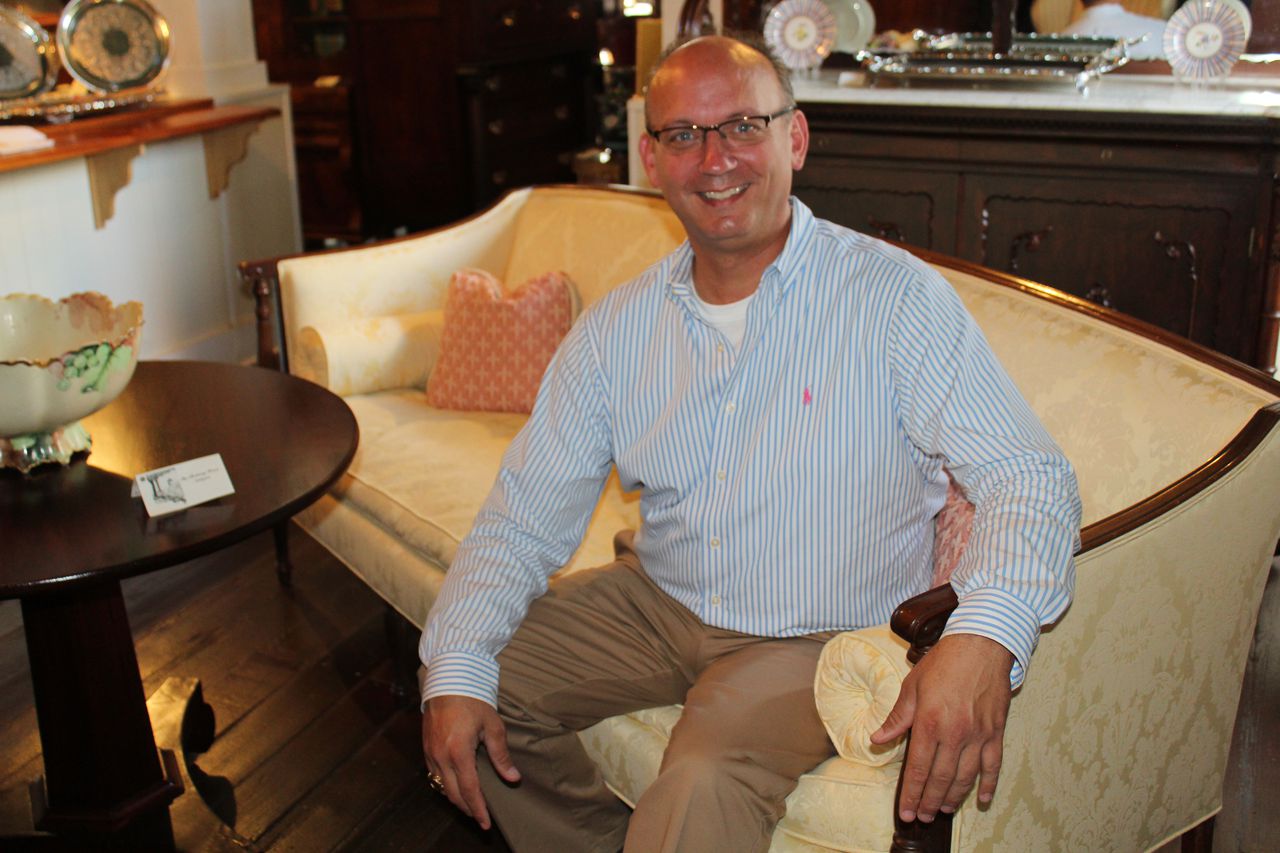 This Alabama Antique Store Is “Not Your Grandma’s Attic”

Lance Britt’s career as an antique dealer began with his love of chicken salad sandwiches.

As a young man, he lived three blocks from an auction house. â€œI was a young bachelor who couldn’t cook,â€ he says. A lady at the back of the auction house was making wonderful sandwiches, so he would buy one and eat it while watching the events. Soon he realized that he could buy good furniture without spending a lot of money.

Before he knew it, he had filled his house with antiques. â€œI had no idea that a decade later I would be in the antiques business,â€ he says. “I was addicted.”

Not that old furniture is new to him. He grew up surrounded by antiques in his parents’ Georgian home in 1926 in Huntsville. In fact, Lance’s company logo, The Brittany House Antiques, comes from a pencil engraving of the fireplace in his childhood home.

Brittany House – a surname game – was established three and a half years ago in Oak Hill, about 14 miles north of Camden in Wilcox County. Oak Hill is “the smallest incorporated municipality in the state,” explains Lance.

The antique store is housed in the former Dale Brothers general store, built in the 1870s. The charming building has a metal roof, a porch, functional shutters that lock and rows of shelves on both sides of it. the main room where all kinds of objects were once exhibited. Lance has the shelves filled with books, silver, porcelain, clocks, and complete sets of vintage porcelain, and every inch of space is filled with well-made furniture that he collects from all over the country.

The main building has 3,500 square feet of space and even more history. There is a room at the front where the owner of the general store employed a keeper who lived in and protected two safes. In another room, customers could choose a coffin. At the back, the 5,000 square foot barn is full of other antiques. The property also contains an old flour mill and a small forge.

â€œThey would feed and clothe you from birth to death,â€ Lance said. “This is where you came to Oak Hill.”

The general store operated until the 1950s, then the building sat vacant before becoming a restaurant for a few years until it closed in 2000. The empty building had been on the market for years and Lance considered moving to it. buy for about five years until the refrain of his friends “Just buy it!” Finally convinced him to do just that.

â€œI thought it would be a good thing for the weekend,â€ he says.

He was working as a merchant in an antique store in Huntsville at the time. But he had visited Wilcox County, where his parents, Mitchell and Jennifer Britt, had purchased and painstakingly restored a pre-war cottage, Magnolia Glen, in nearby Furman. The elder Britts intended to retire there, but “we turned it around,” Lance says. He moved to Magnolia Glen, about 10 minutes from Oak Hill, his parents stayed in Huntsville, and he and his father decided to turn the old general store into The Brittany House.

â€œIt just needed a little TLC and elbow grease,â€ Lance says. â€œKudzu had grown up in the back of the barns. The exterior needed a lot of love.

The boutique is now open on Saturdays, Sundays and Mondays. â€œIt has become a pretty busy business,â€ he says.

On the morning of this interview, a client from Selma purchased a rug just under the area where we later sat on an overstuffed sofa and chair. A couple drove from Georgia to purchase a painting they had seen online.

Due to the store’s online presence, Brittany House has thrived during the coronavirus pandemic. â€œIf you have a good product, you can have a successful business anywhere, even the smallest incorporated town in Alabama,â€ he says.

Lance, who is president of the Wilcox Historical Society, sees “quite a renaissance happening” in Black Belt County, with businesses springing up to improve life in the community. In nearby Camden, Ryan Dunagan and Chris Bailey transformed the old Williams Pecan building into The Pecan on Broad, a restaurant and gourmet market. The couple also owns Fox and Hen, a high-end clothing company.

â€œI bought these shoes from Fox and Hen,â€ Lance said, pointing to his leather moccasins. â€œI can’t get that mark in Huntsville. It’s amazing that they are here.

On Saturdays, he says, residents marvel at the labels on cars coming in from everywhere. â€œThere is a great revival in our county,â€ he said. â€œLike kudzu, it continues to grow. In a Wal-Mart world, we still have hardware stores. It’s exciting to be a part of it, to get calls from everywhere.

In Furman, where his home, Magnolia Glen, was built in 1833, a two-mile stretch of old houses and churches has been renovated, he says. In fact, tickets are already on sale for the upcoming Wilcox County Tour of Homes, which will take place in Furman in March.

â€œMy greatest joy is to see them saved by one,â€ he said. â€œThey are all either just restored or under construction. People are truly discovering a love and passion for home restoration.

Lance has helped people furnish many black belt homes with antiques from his shop and prides himself on conveying the stories associated with them. â€œEverything in this building has a family history attached to it,â€ he says. â€œThe most fascinating part of my job is to discover as much as possible of history and to pass it on. “

He is known to write long descriptions on the labels of each item in order to provide as much information as possible about it. He encourages customers to stick the labels inside a drawer for future reference. â€œCoins are so much more valuable to the people who buy them,â€ he says.

Many of his clients are young families who â€œsee value in investing in older pieces constructed from mahogany and cherry,â€ he says. â€œIt’s fun to see a new generation of customers exploring the world of antiques. This is not your grandmother’s attic.

When he first opened Brittany House, he called it his “gambling den”, but it became so much more. â€œIt’s my passion,â€ he says. â€œI like finding the rooms, finding them a new home and bringing people here who wouldn’t come otherwise. “

Where to Camp – Out and About Live