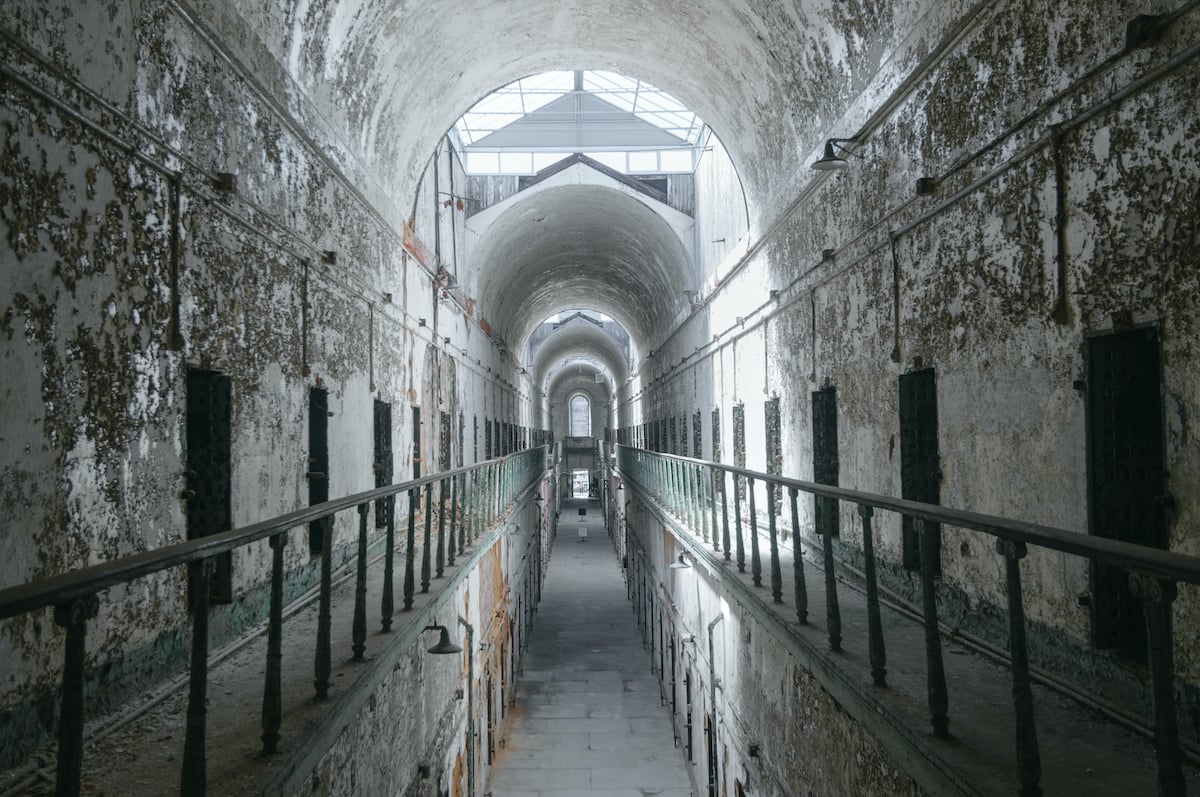 Do you believe in paranormal activity? Pennsylvania is a former state with various historical sites and many places considered to be haunted. There are supernatural and unexplained stories from the Clifton Theater in Huntingdon to the Wedgwood Inn in New Hope to the Old Jail Museum in Smethport.

Let’s take a look at the gruesome history of some of Pennsylvania’s â€œhauntedâ€ places.

Bube’s Brewery provided a free meal in the Catacombs. Visiting Bucks County provided a lodging stay at the Wedgwood Inn. All opinions are mine.

Once an opera house that completely burned down and rebuilt, the Clifton Theater has had many strange sightings and activities. So many people have had ghostly experiences while visiting the Clifton that they are bringing in a ghost hunter and psychic to investigate in November.

When I spoke with owner Dave Peoples he told me he heard footsteps in the hallway when no one else was in the building. He heard voices speaking and figured the janitor was still in the building, only to find out he was at home in bed.

Guests reported seeing a lady in a red dress walking around the theater.

Who are the spirits and why are they hanging out in the Clifton? One of the ghosts is believed to be the man who lit the coal oven for many years. Another is believed to be a previous owner. The lady in the red dress is said to be the daughter or niece of a former owner. The good news is that they are friendly spirits since nothing bad has ever happened to those who have heard or seen them.

They are selling tickets to attend the investigation when Mustafa Gatollari from the TV show A&E Ghost hunters and world-renowned psychic April Busset “The Psychic Housewife of New Jersey” is coming to town.

You can visit the Clifton to watch a movie and maybe you will see or hear something out of the ordinary.

The Old Jail Museum was once the original Smethport prison and is considered one of the 10 most haunted buildings in Keystone State. It is said that a spirit haunts the dungeon and that this ghostly resident is a former inmate.

He was said to have been one of the many prisoners executed in the basement of the building. He claimed to be innocent and just before his execution threatened to haunt the building.

Many claimed to have seen his ghost, but inmates, guards, workers and visitors claimed to feel his presence as well. There seems to be a lot of unexplained things that happened inside the Old Prison Museum that are attributed to the Ghostly Spirit.

The Old Prison Museum is open to visitors to explore exhibits, shop in its general store, and tour the dungeon.

The Legend of Katy Vandine’s Ghost is quite the chilling story of Katy’s Church. Katy’s spirit is sometimes seen crying near the church. Does she cry for the married man who betrayed her, or does she cry for her soldier husband killed in the war? Was her death a suicide or was she hanged for being a witch? Several tales have circulated over the years … nevertheless, she was hanged from a tree near the church, and her ghost is said to haunt the cemetery.

According to legend, if you stand on Katy’s grave and knock on the tree when there is a harvest moon, her ghost will appear dressed in white and walk towards you. Locals reported seeing his spirit walking through the church, cemetery and nearby hill.

The Eastern State Penitentiary in Philadelphia operated from 1829 to 1970. It stood empty and abandoned for 18 years, then opened for limited visitation. Looking like a huge castle with a bit of dread, it is an empty, crumbling cell building, considered one of the most haunted prisons in America.

A prison designed to inspire regret in its prisoners, I’m sure there would be dozens of stories it would tell if the walls could speak. He detained many notorious American criminals, including Al Capone.

Walking around this prison is a frightening and frightening experience. Learning about the deaths that have occurred and the strange happenings over the years is haunting. The persistent spirits of prisoners are believed to frequent the empty cell blocks of this National Historic Landmark. Take a day or night tour and see how many wandering spirits you can find.

The prison offers daytime and evening tours for the opportunity to see wandering spirits. Her hours change often due to COVID, so check the website before visiting.

Most of the tour itinerary is ADA compliant, but a few areas are not accessible.

Tickets are available online for purchase.

Ghosts are said to roam the halls and catacombs of the Bube Brewery. The 1800s brewing complex is a unique restaurant with many ghost stories. Considered one of Pennsylvania’s most haunted restaurants, Bube’s not only has a brewery, but also a Victorian hotel and catacombs.

My husband and I ate at the Catacombs Restaurant, an upscale and unique hideaway 43 feet below street level, and the place that has seen the most paranormal activity. Unexplained laughter was heard in the underground chamber, ghost people sitting at a table and then disappearing, and ghostly figures sliding across the floor were reported.

Many guests have said they saw the ghost of Pauline Bube Engle, granddaughter of the original owner, floating through the halls of the 19th century brasserie and hotel in a white dress and her hair pulled back.

We didn’t see or feel anything unusual when we visited, but I can honestly understand why this area could be haunted.

In 2012, the Syfy channel Ghost hunters investigated the brewery for an episode. The team concluded that there was paranormal activity in Bube.

Ghost tours are offered on the first and third Friday of each month. In addition, Bube’s offers mystery dinners throughout the year.

Civil War soldiers and slaves are believed to haunt this historic restaurant. The house served as a station on the underground railroad and hid runaway slaves.

During the Battle of Gettysburg, Dobbin House was used as a hospital for wounded soldiers, and some did not survive. Could their ghosts still haunt the house?

Enjoy a meal there and report if you see or feel anything unusual.

Footsteps walking around the hostel and unusual shadows have been reported. Could the early 1800s Farnsworth House Inn be haunted?

The hostel is named after Brig. General Elon Farnsworth and housed Confederate soldiers. Farnsworth was responsible for the deaths of 65 men. Could they haunt the inn?

Hegarty Mansion is a real haunted mansion. It is a private residence throughout the year, but in October it allows visitors to tour the house to experience the sights and sounds of a haunted mansion.

Rooms with 12 foot ceilings and squeaky doors combined with the creepy sounds you hear in this mansion make you feel uncomfortable the moment you enter the building.

To note: It has actors to help create a haunted house atmosphere during the tours.

Once a facility for the poor and the mentally ill, it is now known as Haunted Hill View Manor. Visitors report hearing voices and footsteps and seeing apparitions disguised as patients looking out of the rooms. Its motto is “Home of those who lived there … and still reside there!” “

You can tour the facility or participate in public and private paranormal investigations. During the Halloween season, he creates a spooky mansion.

When I stayed at the Wedgwood Inn, owner Carl Glassman mentioned the Haunted Inn. He said that the most frequent spirit wandering the inn was that of a young girl named Sarah. Sarah is believed to be around 12 years old, and the only visitors to have seen Sarah are other young women who have stayed at the hostel.

Ghostbusters visited the Aaron Burr House and reported seeing an apparition and feeling like someone was pulling at their clothes. Could it be the ghost of Aaron Burr, the third vice president, who killed his enemy Alexander Hamilton in a bloody duel?

He is said to have sought refuge in the New Hope house for nearly a week.

Benjamin Franklin, the founder of the American Philosophical Society in 1743, haunts the library by sitting on the steps or hanging out in the library.

A statue of Ben sits in front of the building and is believed to come to life and wander around the city.

Ghostbusters have visited and are sure there is paranormal activity at the zoo.

Other haunted places you can investigate:

10 things to do in Ajman