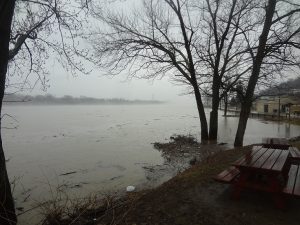 The river: “Talk to me. Talk to me.’ A boatman learns to listen to the voice of the river

The riverboat captain is a storyteller, and Captain Don Sanders shares the stories of his long association with the river – from discovery to a way of love and life. This column is repeated from March 26, 2021, as Caption Don provides home care for his sick wife. He is looking forward to coming back soon.

The Middle Ohio River was cresting above flood stage at 56.82 feet on the Cincinnati gauge when I made these demands of the clogged torrent as I stood on its banks overlooking the rapid bend of ‘Aurora, Indiana. Mile 497.7.

Lately, TV river shows from Cincinnati stations have reported the rising stages of the Ohio River in gloomy descriptions of water seeping into businesses and homes built too close to the waterway’s property line. navigable regularly fluctuating. Nothing new or unexpected described the river’s recent natural adventure. For more than 11,000 years, the waterway we call Ohio has made annual exploration trips to inspect its outer limits. Compared to other trips, this one was just a Sunday ride.

I stood on its shores, overlooking the big bend in Aurora, Indiana. Mile 497.7.

For much of the last half of last year, I avoided the COVID-19 pandemic from my home above the river overlooking Aurora Bend. Today, however, my “writing day,” the Thursday before this column hits the streets on Sunday, I stopped at the park along the Ohio River after a run took me out of the House. Otherwise, I doubt I would have stood on the bank making demands of such an amazing and omnipotent waterway at almost the same time the floodwater reached its maximum height.

Since my retirement from active service on the Mississippi and its tributaries, and especially since the sale of my paddle steamer, the Rafter CLYDE, my areas of nautical responsibilities have narrowed to what I see and hear on my desktop computer and the living room boob tube. But for my friends who still make a living on inland rivers, the recent flood presented some challenges.

For more than 11,000 years, the waterway we call Ohio has made annual exploration trips to inspect its outer limits.

Captain Josh Lakin, Senior Captain of the Rising Sun, Indiana to Rabbit Hash, Kentucky ferry, the LUCKY LADY, docked his ferry behind my old casino boat, the GRAND VICTORIA II, now known as the Rising Star Casino & Resort, at the beginning of last week, when the swollen current and drifting wreckage became too much of a challenge for water shuttle safety.

Just upriver from where Captain Josh dumped the LUCKY LADY, Barb Anderson, the feisty owner of the Riveria Inn B&B, better known as “Anderson Plantation” to some of us, stirs up the river for her antebellum style reminiscent of a plantation manse along the Lower Mississippi River, uncovered both a loss and a gift of floodwaters. Ms. Anderson best explained the unexpected exchange between her and the Ohio River.

“Well, Ol’ Man River took over the docks he gave me a few years ago and left me a pile of corn stubble about two acres in their place. Not a good trade at all!

“La BELLE is off to a good start for a new season. Work at the shipyard is complete and he is in great shape. As for high tide, it takes a bit more effort to get to the boat and back, but it’s just another day at the office for us… we’re on schedule for 2021.”

Surprising to many river watchers, the locks at Markland have been closed to river traffic. Yet with the water conditions, those who knew of the dangers associated with locks and dams during high water events applauded the decision. In recent years, several accidents attributed to flooding around various dams have resulted in the loss of lives and material.

And according to the lock keeper I spoke to by phone in Markland on Thursday, “We’ll assess the situation in the morning and go from there.”

Ol’ Man River took over the docks he gave me a few years ago and left me a pile of corn stubble about two acres in their place.

By the time this article comes out, I expect the lock at Markland Dam to be fully functional. Yet danger lurks whenever steel boats encounter concrete walls amid raging waters rushing out to sea. Such was the case this past Wednesday, March 3, when, according to officials:

“Eight people were safely evacuated… from a tug that lost power near the Belleville locks and dam and drifted several miles downstream.”

It’s only when the Ohio River forgoes inspection of its outer banks and simmers that river pros will breathe easier.

Returning to the start of this story along the shoreline where land and water meet at Aurora Bend, I arrived where the swollen river lapped almost to the parking lot of the city park. The sight of raging waters filled with the discharge from each bank as it swept was inspiring, but something elemental was missing from the spectacle of the river and me. As I watched the awe-inspiring sight, I realized what I was seeing was no different from watching a river report on the evening news. With a long and intimate relationship with the river over the past 60 years, I instinctively recognized that I was not listening to the voice of the river.

Those words immediately brought me back to the first time I heard the sizzling song of the river. It was dark on the lower Mississippi when I landed the replica ADVENTURE GALLEY II flatboat behind a sandbar as close to Rodney, Mississippi as possible. Spurred on by tales of the glamorous and prosperous former river town once considered a likely capital for the state until the river changed course and washed Rodney inland and miles up the Mississippi, I ventured away from the flatboat and crew across the bar where I looked across the wide torrent to the eastern shore. This would turn out to be as close to the abandoned and deserted village site as possible.

It takes a bit more effort to get to and from the boat, but it’s just another day at the office for us. (Photo by Daniel Lewis.)

Quickly, awareness came with a hissing, sizzling sound rising like musical tones of passing water as it rushed downstream. Bravely, I waded through the torrent until the current swirled around my legs, ripping up the sand and rushing me away with its surging song. The melodious pace prompted me to follow the enchanting voice until it took all my willpower to avoid the siren’s call from the river.

At the waterfront in Aurora, once again, the memory of the song of the Mississippi River whistling past Rodney morphed into the resonant tones of the Ohio River. Obviously I heard the murmuring and gurgling of the water as well as lower, quivering sizzles whispering as the river continued its ceaseless activity.

Renewed, invigorated, and reassured of my continued loyalty to the river, I heard myself affirm as I turned sharply to leave…

“I want to be out there…I need to be on that water.”

Captain Don Sanders is a river man. He was a riverboat captain with the Delta Queen Steamboat Company and with Rising Star Casino. He learned to fly an airplane before learning to drive a “machine” and became a captain in the USAF. He is an adventurer, a historian and a storyteller. Now he is a columnist for the NKyTribune and shares his stories of growing up in Covington and his stories from the river. Hang on for the ride – the river has never looked so good.

I landed the replica ADVENTURE GALLEY II flatboat behind a sandbar as close to Rodney, Mississippi as possible.

My 8 Favorite Small Towns to Visit in Texas Hill Country