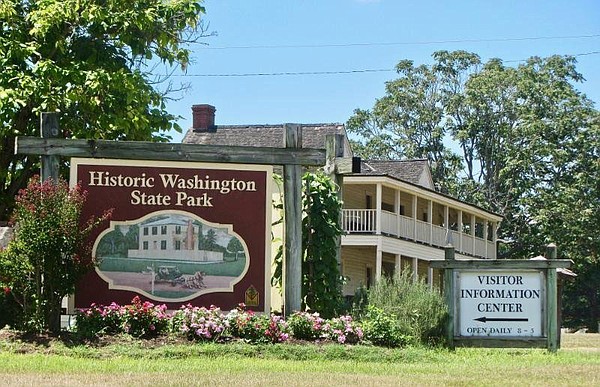 The past comes alive in Washington’s structures, tours

On a 98-degree afternoon, the heat inside the Blacksmith’s Shop at Washington State Historical Park is scorching enough to drive a few tourists outside before the blacksmith finishes his demonstration.

“If it’s too hot for you, feel free to leave early,” Jerry Ligon says, shaping a glowing piece of metal. He also sweats, “but I kind of got used to the temperatures here.”

When this Hempstead County community flourished until the end of the Civil War, “the blacksmith ran one of the most important businesses in town,” Ligon says. He started working three years ago as a blacksmith at the historic site, operated by the Arkansas Department of Parks, Heritage and Tourism. The 101-acre park overlooks the city, which was the last Confederate state capital in 1863-1865. The current population is 165.

Open daily, Historic Washington preserves the largest collection of 19th-century buildings in Arkansas. Thirty of them are labeled as historically significant. The setting gives an accurate sense of what city life was like here, dating back to the days of Civil War slave ownership.

A dozen restored works can be visited, mainly on six commented itineraries with very varied themes. Each tour, stopping at three properties (two in one), is $7 for visitors 12 and older, $3 for children 7-12, free for 6 and under. Three tours are offered each day.

One, “A Woman’s Touch,” focuses on the second-class citizens of this male-dominated era. It focuses on “three socioeconomic stations accessible to women in the 19th century by visiting and exploring the working woman, the woman business owner, and the wealthy woman.”

Third-class citizens of the pre-war period are the subject of “mind, body, and spirit”. On this tour, “the lives of black citizens in Washington and their significant contributions to the community and country will be explored within the context of stages of interracial development in the region.”

Other topics on the tour include the city’s finest 19th-century homes, the types of work done by blue-collar workers and professional residents, the types of businesses and goods sold, and the daily lives of early settlers. , including the tasks necessary to survive.

Tour tickets are sold at the 1874 Hempstead County Courthouse, which serves as the park’s visitor center and museum. Exploration of the information-rich museum is free, as are the blacksmithing and self-guided walking or driving tours of the historic structures. A massive natural highlight is Arkansas’ tallest magnolia tree, planted in 1839 by attorney Grandison Delaney Royston.

The courthouse exhibits trace the growth and decline of Washington, beginning with its founding in 1824 as a convenient stop for travelers on the rugged southwestern trail that led to the future state of Texas. The town soon became the county seat for Hempstead County’s mostly rural population.

Washington’s steady decline was foreordained in 1874 when the Cairo & Fulton Railroad bypassed the city in favor of Hope. In 1875, a fire destroyed five streets in the business district. Another fire in 1883 destroyed another 24 businesses. Washington managed to remain the county seat until 1939, when that role was assumed by the much larger Hope.

Summer visitors still sweating the Blacksmith Shop can find air-conditioned comfort with lunch in pre-war surroundings at Williams’ Tavern. The structure, built 10 miles from Washington in 1832, was moved to state park in the 1980s.

The cozy restaurant’s midday menu includes plated lunches, sandwiches and salads. There’s no cold beer in this mostly dry county, but the iced tea is a refreshing antidote to the heat of the forge.