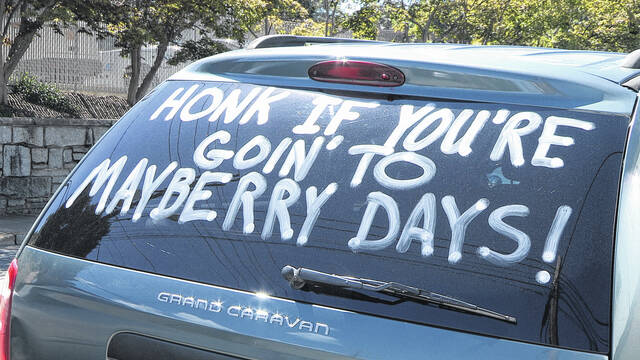 T. Graham Brown has seen a lot and visited a multitude of different places during his 40 year musical career.

The country music star has released 16 albums. Almost two dozen of his singles have made it – 11 in the Top Ten Billboard Hot Country Songs, three of which reached number one.

Along the way, he lived the life of a musician, staying on the road, doing thousands of shows all over the United States and beyond.

Still, looking more like an artist leaving for his first tour, the country music star is almost giddy with anticipation for two of his upcoming appearances, both at this year’s Mayberry Days.

“I’m super excited to come, I really am,” the Nashville, Tennessee resident said recently. “I’m not saying that. I am really excited about this.

While he’s set to perform at the Mayberry Days Dinner Thursday night and the Historic Earle Theater on Friday, he has his own list of things to do in Mount Airy.

He said he would also like the chance to meet Thelma Lou’s Betty Lynn.

“I would love to give her a hug, that would be awesome,” the singer said.

While Brown has had a very successful career as a singer, when he talks about his visit to Mount Airy this week he is much more interested in talking about the show and the people on the TV show.

For anyone who chats with Brown, it doesn’t take long to realize he’s a true fan, not someone who says that just because that’s what Mayberry Days fans want to hear.

His tour bus is called Bullet Maintenance – a name he and his staff gave to the vehicle in the 1980s, when its career was starting to take off.

“Because of the Barney bullet,” he said of the strange name. “In one episode, Barney was in the bank, and he was riding on Asa the guard, his gun was falling apart, so Barney was running on him. And then Barney took the bullet out of his pocket, lifted it up and said ‘Now, Asa, here’s the bullets talk.’ “

Brown said he grew up watching the show in its original version, but really became a huge fan during his college days, attending the University of Georgia. There he started watching reruns and fell in love with the series.

“We have our own chapter of the Andy Griffith Show Rerun Watcher’s Club on the (tour) bus.”

Although he never had the chance to meet Andy Griffith or Don Knotts, nor most of the cast, Brown said while performing at the Grand Old Opry that he had met Richard O. Linke, the manager. by Griffith. Linke was able to get some signed photos of Griffith for Brown.

The singer also has a Vote Fife For Sheriff poster by Don Knotts from the movie “Return to Mayberry”, courtesy of Jim Clark, one of the founders of the original Rerun Watcher’s Club.

He was a close friend of George Lindsey, who played Goober in the series.

“I got a lot of my Mayberry fix from it,” Brown said. “We were always talking about Mayberry. He had a lookout party at his house for Return to Mayberry… it was really fun.

Brown said he also has an orange and blue lettered jacket from the fictional Mayberry Union High – and just to show how deep his Mayberry trivia are, Brown embarks on an a cappella version of the high school song – without miss a word.

Brown grew up in Arabi, Georgia, in the south of the state. He describes Arabi as a small farming town with around 300 people living there.

“Both sides of my family are farmers, we’re a bit used to this way of life, I guess, that’s how I grew up.”

While those roots may have helped shape his eventual penchant for country music as an artist, he said that by singing – and occasionally writing songs – he draws inspiration from a wide variety of genres. .

“When I was little, I had a transistor radio and I listened to it at night. I could pick up stations from all over the United States on the AM dial… you could hear an R&B station from Nashville, a country station from Louisiana, a Top 40 in Fort Wayne, Indiana.

He counts R&B legend Otis Redding, country debuts Johnny Cash, George Jones and Loretta Lynn as influences on his music, and he has said he is a huge fan of many more famous stars.

“I remember listening to the Beatles, The Rolling Stones, Paul Revere and the Raiders, the Monkees… Aretha Franklin, Percy Sledge, I love everything. Frank Sinatra, whom I really like, and Tony Bennett.

His own musical development wasn’t necessarily something he was looking to pursue – instead, it just seemed to come naturally.

This “blunder” eventually led to working as a musician, earning a living by regularly performing nightly shows at a Holiday Inn in Athens, Georgia.

He married his wife, Sheila, in 1980, and two years later they both moved to Nashville, Tennessee, where he found work singing publicity jingles for a multitude of local and national businesses. In 1985, he released two singles from his soon-to-be released debut album, “I Tell It Like It Used To Be”.

The first of the singles, Drowning in Memories, reached 39 on the US Billboard Country charts, and his second single, “I Tell It Like It Used To Be,” reached No. 7. The following year he released the album, which peaked at No.15 on the Albums chart, along with three other singles, two of which reached No.1 – and her career was set.

Now, nearly 40 years after moving to Nashville, he and his wife live just outside of town, with views of rolling countryside and distant ridge peaks from his front porch.

Except when the coronavirus pandemic cancels her shows, Brown is still singing, still on tour, and still trying to fill her list of things to do and people to meet Mayberry.

And he’s hoping to tick a few things off that list this week, when he’s at Mount Airy for Mayberry Days 2021.

The disappearance of a black communist in Stalin’s Russia