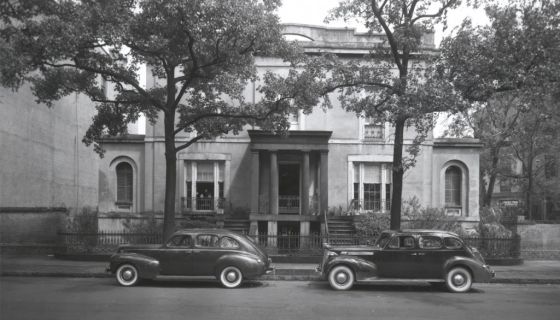 In Savannah, Georgia, on the edge of Madison Square, stands a house with a disturbing past. The story of Sorrel Weed House is spooky, frightening, and its history is surrounded by gruesome, pre-war southern stories.

These tales include a slave named Molly who lived in the mid-1800s. She was mysteriously hanged after the suicide of her slaveholder’s wife.

Now Molly’s ghost is trapped in the house with her horrors, haunting her for all eternity.

The internet is awash with stories of ghost hunters visiting the estate and hearing screams late at night, seeing ghostly figures in photos and even seeing an all-black lady wandering the hallways.

Whether you believe in ghosts or not, there is no doubt about the horrors that people of color, as well as women, faced in the pre-war south. Ghost stories are usually told because a gruesome tragedy didn’t get the justice or the attention it deserved. Well, let’s give it some attention.

The pre-war zone was a time in US history when slavery experienced its greatest expansion. The American Revolutionary War decimated Savannah’s slave population, creating financial losses and hardship throughout the city. According to a GSU report, a third of the slaves in Georgia escaped with the British army, and many more fled and established Maroon communities outside the city.

Maroon communities were groups of Africans who fled to geographically isolated regions of America to escape slavery and persecution by Europeans. Their goal was to live as a free people beyond the reach of colonial oppression.

This left Savannah with a shortage of slaves. Whites believed that the only path to recovery was the resurrection of slave labor.

The invention of Cotton Gin would revitalize the cotton industry and greatly increase the demand for slaves. In 1790 there were six slave states; in 1860 there were 15.

If you wanted to be rich in the south, the fastest way to do it was to get involved in the selling business. Enter one, Francis Sorrel a nineteen year old immigrant from Haiti.

Sorrel was born in Saint-Domingue on May 4, 1793. His father was Colonel Antoine FranÃ§ois Sorrel, an infantry lieutenant and French naval engineer. His mother EugÃ©nie de Sutre, died when he was only one month old. Although there is no document mentioning her, some believe she was a free woman of color. Haiti was in the early stages of the Haitian Revolution, which was a volatile and bloody time for the country.

Sorrel’s father finally left Haiti in 1803 without his son. Francis would never see his father again, but the boy would find a way. He got a job as a clerk in a merchant business in Port-au-Prince. He will excel and is eventually transferred to the company’s Baltimore branch.

With the dream of being a wealthy American, Sorrel worked hard at his new post in Maryland, moved to Savannah in 1819, and started a business with his former employee Henry Douglass. They began to advertise in the local newspapers the sale of whiskey, butter, corn and flour. They were also listed as senders of a slave to Baltimore. It would be the first glimpse into Francis’ life in the slave trade, but the business would focus primarily on the sale of cotton and other agricultural products. On September 5, 1822, Francis married Lucinda Ireland Moxley, seventeen, the niece of his partner Henry Douglass. The Douglass family were made up of wealthy slave-owning Virginians who viewed a partnership with Sorrel and his business as very lucrative, but never thought about how terrifying it was for a seventeen-year-old to be married. to a man because of business opportunities. Two years later, Francis Sorrel would use his new marriage status, some acquired wealth, and ties to wealthy families to officially become a citizen of the United States. He was naturalized to Savannah’s Superior on July 24, 1824. A year later he ended his business partnership with Henry Douglass and started his own business. This is when Sorrel and the Horrors really begin.

In 1826, tax records revealed that he bought three slaves and then sent one, a 40-year-old black woman, to New York City. A year later, records show he sold a black slave to a man named RW Stiles for $ 300. A month later, his wife would tragically die of yellow fever. He would then marry the younger sister of his deceased wife, Mathilde, 23, in 1829.

With business booming, Sorrel bought properties throughout the city and began production on his Greek Revival style house which was completed in 1841.

In 1938, he bought a ship named William Gaston for $ 10,000. From 1839 to 1860, the ship will appear on many slave manifests. Records show he made more than 90 trips to ports in Georgia, South Carolina and Florida, although it is not clear whether this vessel was the same as Sorrel’s. But we do know that he owned as few as 3 and as many as 11 slaves in any given year. In 18 years of tax records, he owned about 6 slaves per year. It’s almost two decades of free work. This man possessed human beings for almost 20 years and forced them to work and live under his control. He also used violence and oppression to keep them submissive.

Public hangings were part of Savannah culture. The slave uprisings in Haiti terrified slave owners in America and led to a system of oppression that included free blacks as well as Native Americans. Sexual relations between free people of color and slaves were not allowed. Blacks were also not allowed to congregate and communicate in large groups. More rules were created for those beings who were already considered slaves. And although we don’t have a mirror directly in Francis Sorrel’s Window of Life, we can paint a picture. The wealth over time came from how you could keep your slaves online. The commodity was crucial to the advancement of wealth among the white men of Savannah. Keeping them tame and online meant more room to make money.

Slave owners and sex with their slaves

And although slave labor was seen as male-centered labor, black female slaves were valuable commodities among white men. Sorrel owned and sold many young black women during his 18 years of slave possession. White men regularly raped or coerced their young female slaves. In 1960, over 2,000 mulattoes lived in the city of Savannah, but black men were not allowed to have sex with white people. This meant that master-slave sex was common among city dwellers. Thousands of women in southern Antebellum have been coerced and manipulated into consensual sex with their owners.

According to folklore, Francis Sorrel also had problems with infidelity, which resulted in the death of Mathilde, his second wife. The stories say that Francis had an intimate relationship with one of his slaves named Molly. His wife got wind of the affair and the two red-handed. Let’s be clear, consent means that both parties are free to make their own choices. But since Molly was a slave, she wouldn’t have had much choice in having a relationship with Sorrel, her slave owner.

The death of Matilda Sorrel and the slave Molly

One night during their sex, Sorrel Matilda’s wife finds out about the affair and is completely broken. In a manic state, Mathilde jumps from a window on the second floor of the house next to the Sorrel house, killing herself.

A few weeks later, Molly, a slave, was found dead hanging from a noose in the car at Sorrel’s Estate.

Molly’s ghost now haunts the estate, and her tragic death has become folklore among townspeople. Questions swirled around the two deaths. Did Sorrel play a role in both? Even though there are newspaper articles to support Mathilde’s death, there is no evidence to prove Molly’s death.

Records show that between 1826 and 1857 Francis owned a slave named Molly. But, he shipped from Savannah to New York, as she appears on a slave manifesto as being transported north in 1857, three years before his wife’s death. There is no way to prove if Molly was actually on this ship or if she was killed. But we do know that thousands of black people were killed in the pre-war era with no death records, no justice, nothing – just folklore.

Federal censuses of slaves were recorded in Savannah from 1850 to 1860. They said that Francis Sorrel was the owner of 5 slaves described as black and 8 slaves described as mulattos. A sexual encounter with Sorrel and one of his slaves is not exaggerated by any stretch of the imagination.

But the truth will never be told, just stories like these that live on in our folklore. While America has ghosts from its past, their origin stories are directly linked to the horrors of the pre-war South and the horrific hardships people of color had to endure during this time.

The real horror story is having to live your whole life in bondage. It was a reality for so many blacks in the early Americas. Their pain turned into our ghost stories.

But it was only a smart way for white America to come to terms with the atrocities committed against people of color throughout this country’s history. Ghost hunters and haunted tour guides earn millions from Molly’s story. But if this story is going to make you rich, then why not give it the angle it deserves? How the system of male domination and patriarchy associated with slavery terrified people of color and made white men rich. Kind of like a horror movie.

The fear of Lake Lanier and the dark city buried below

The disappearance of a black communist in Stalin’s Russia