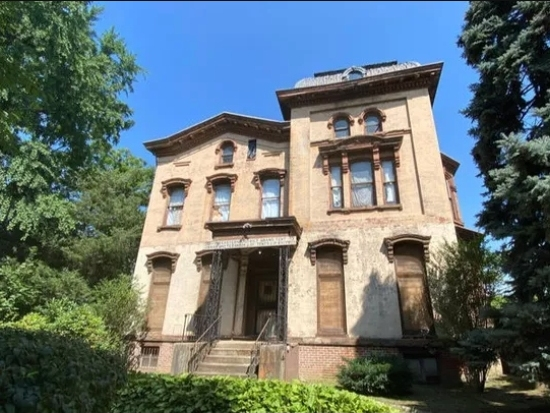 BED-STUY, BROOKLYN – A secret society founded to help slaves escape from the pre-war South is shedding a century of secrecy in hopes of saving its home in Bedford Stuyvesant, the president of the group to Patch.

The United Order of Tents – an organization helping women with ties to the Underground Railroad – needs $250,000 to repair the historic MacDonough Street mansion, confirmed Essie Gregory, chair of the District Executive Council of the ‘East.

“Everything the Tents did was done in secret,” Gregory said. “To transfer slaves from slave states to a free state, they couldn’t do it openly.”

Along with asking for $250,000 in repairs to make the building a better home for the Tents and other community groups, the Tents are also investing in preserving their history – and perhaps losing some of their secrecy.

The group, officially founded in 1867 but with roots dating back to the 1840s, is the oldest continuously operating Christian women’s organization in the United States.

It was found by two formerly enslaved women, Annetta M. Lane and Harriet R. Taylor, and began as a station on the Underground Railroad, according to an article in Our Time Press.

The name of the tents is derived from the sparse shelter on which those who fled slavery rested on their journeys north.

The building at 87 MacDonough St. was built in 1863, but since 1945 has housed the United Order of Tents Eastern District 3, according to their website.

Their work at Bed-Stuy has quietly focused on helping women in need, especially those in nursing homes and women’s shelters, their legacy of secrecy still keeping the tents an unknown entity to most.

The headquarters serves as a haven for meetings, gatherings and ceremonies, and the tents have also allowed other groups to use the space, as well as the community as a whole.

Their headquarters on MacDonough Street fell into disrepair after years of low membership due to the group’s secrecy.

An earlier restoration effort, funded by the sale of two plots of land belonging to the tents, failed when they were abandoned by a contractor, Gregory said.

“We used to have community Thanksgiving dinners and health fairs,” Gregory said, “but for the past 10 to 15 years that hasn’t happened.”

Gregory said with the renovations they hope to expand their work in the community.

Ideas include “creating a space for young mothers to hang out and get resources,” Gregory said, and building a museum to share the society’s legacy.

But the Tents are also looking to grow the organization, even if that means leaving some of their previous secrecy in the past.

Gregory, who joined the team 25 years ago, said she first heard about the tents at a funeral service and decided she needed to investigate.

“Curiosity is how I joined,” Gregory said.

But while the secrecy only attracted deeply dedicated people, it also led to low dues-paying membership which ultimately hampered their ability to maintain the historic Tents headquarters.

“Until maybe two years ago, people didn’t hear much about tents here in Brooklyn,” Gregory said.

A recruiting effort has since taken place, bringing their current strength to around 50 women.

“We attract a lot of people interested in tents,” she said, “interested in joining and carrying this story. When they read the history of the tents, they think it’s important enough to keep it here for the future.

A certain secrecy remains with the tents, as Gregory explains how newcomers can find out more about the legendary group.

“Interact with the tents,” Gregory said. “To know more about the tents, they have to be part of it.”

Get more local news straight to your inbox. Sign up for free newsletters and patch alerts.

Feel good in the Sierras