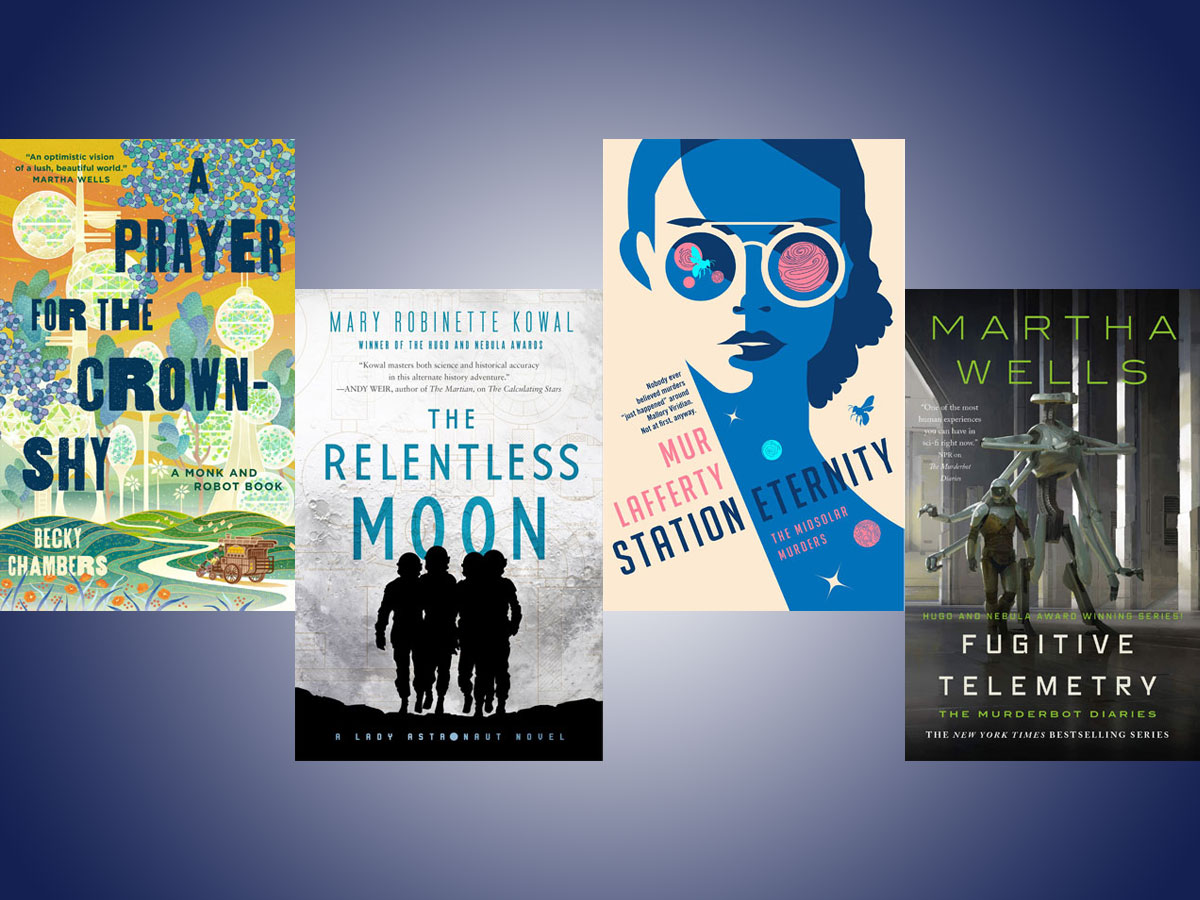 Pile of the day: some sci-fi books I’ve read recently!

You may have seen that I was overtaken by the lady astronaut series this year. I missed it when it came out but I’ve heard good things about it, and I’ve enjoyed them a lot so far. (Note: If you have watched the Apple TV+ show For all mankind and you’re looking for more alternate space race histories, this is a great series for that!) The third book, The Relentless Moon, was the longest to date; the timeline of this book actually overlaps with the second book, The fatal sky.

We move on to a different narrator: this time, in place of Elma York (who is traveling to Mars), Nicole Wargin is telling the story. Nicole is part of the first group of female astronauts, and she is also the wife of Kenneth Wargin, the governor of Kansas. Since the U.S. government moved to Kansas City after the meteor impact and the International Aerospace Coalition (IAC) is based there, it means Kenneth is an important political figure, and Nicole has honed the role of wife of a politician, throwing parties when needed and smiling supportively at press conferences, all while pursuing her career as an astronaut.

His final trip to the moon carries additional responsibilities: some of the IAC’s recent malfunctions have been proven to have in fact been sabotaged by Earth Firsters, those who believe the space program is an irresponsible use of resources or that there hasn’t been enough done for the people who will be left behind. Nicole has been tasked with helping the moon base administrator track down any potential spies, in case there are plans to sabotage the base itself. Indeed, the problems begin as soon as they arrive, with a disaster landing on the moon, then a poliomyelitis epidemic which threatens the colony.

I think part of the extra length in this book was to help the reader get to know Nicole, who had appeared in previous books but wasn’t the central character. Nicole’s particular skills and challenges are different from Elma’s, and this volume turned out to be more of a thriller than the others. As various things seem to be falling apart on the moon base, Nicole must do a lot of detective work, figuring out who she can trust and how to identify the culprit. Some of the events of The fatal sky intersect with the plot in The Relentless Moongiving them a new look.

The Relentless Moon, like the other titles in this series, was excellent and I highly recommend it. A fourth novel is in the works, so hopefully we can find out more about what’s happening on Mars soon! In the meantime, Mary Robinette Kowal also has a few news and news set in that same universe, so I’m planning on going to catch up on those.

This is the second short story from Becky Chambers Monk and Robot series, and it’s just as charming. Brother Dex and Mosscap the robot return to human civilization, and Mosscap quickly becomes a celebrity. As the first robot to emerge from the forest since Awakening (when robots gained sentience and decided to live on their own), Mosscap was tasked with answering the question: what do humans need?

Turns out, humans don’t really know how to answer that question. Some give purely practical and precise answers: I need a new tire on my bike; I need some touch up paint; I need this load of lumber moved. Others have more philosophical needs: purpose, adventure. In the world of this book, society is built so that people’s physical needs are met – no one goes hungry or can afford shelter. So what else is needed?

Like the first book, A Psalm for the wild mounts, this story is above all a story of conversations and philosophical reflections. Sure, things happen, but the book isn’t so much driven by a series of actions as it is a series of connected thoughts about what motivates us. It’s really the kind of thing that Chambers excels at, creating intriguing characters that you can connect with, then letting them wander through a world you wish you could live in.

Now here’s a sci-fi world you probably have don’t desire to live, even if the book is fantastic. It is the sixth book of the Murderbot Logs series, set in a dystopian world that is mostly run by corporations. Murderbot now lives on Preservation Station, run by one of the non-corporate states that sometimes serves as a link between the Rim Corporation and other non-corporate entities. It’s a utopian place in an otherwise terrifying universe, but even here things can go wrong.

The book opens with a corpse found on the station, and Murderbot wondering if GrayCris (an evil corporation) is trying to reach his friend (and Preservation Alliance leader) Dr. Mensah. Station security thinks otherwise, but they don’t know where to start either, as murder isn’t the kind of problem they usually have to deal with. It’s another space thriller (I guess that’s my theme today?), and Murderbot goes through it in typical Murderbot fashion, which is with a bit of hacking, a extreme paranoia and as little eye contact as possible.

It’s a short story, so it’s pretty short, but Wells manages to wrap a good chunk of it, partly because by now you should know most of the characters and there’s no plot catch-up provided, so definitely don’t start here. As Murderbot and station security pursue their leads, the mysteries deepen and they’re left with even more to figure out, and it kept me guessing until the reveal.

Did I say thriller in space? Here’s another one! I briefly mentioned this one in my Space Stack Overflow, but wanted to dive into it a bit more now that the release date is approaching (October 4th). Mallory Viridian is a detective and she’s extremely good at unraveling murders – she just has a knack for connecting the various tangled lines of relationships, evidence and circumstances. However, her big problem is that she feels like her very presence causes murders. Wherever she goes, random strangers end up dying and she is dragged into solving the case.

So now she lives on Eternity, a sentient space station where she won’t be near any humans because the station has largely banned them. She thinks that if she’s not around people, they can’t be murdered. But now the station has agreed to allow human guests, and there’s a shuttle full of them on their way… and pretty soon people (and aliens) start dying. Mallory must find the connections quickly, as the station itself is in peril.

Eternity Station is populated by several different alien species, so part of the fun of the book was just meeting them and seeing what they look like, as well as how they interact with each other and with Mallory. There are the various, hive-mind wasps that seem to be all over the station and are always collecting information for their own unknown purposes. Gneisses are giants made of rock that communicate through vibrations and have a truly bizarre life cycle. The Phantasmagore have plant-like symbiotes that can camouflage them.

Although the story is written in the third person, the perspective changes quite a bit from chapter to chapter, depending on the central character. Most of the time it’s Mallory, so we’re entitled to her thoughts and impressions, but sometimes the story follows another character and we see things from her perspective instead. It can be a bit confusing at first because of the third-person narration, but you get used to it and sometimes you see what a situation looks like from multiple angles.

I really enjoyed this one, both the murder mystery itself and the eventual reveal of why Mallory is surrounded by murder to begin with. The book is listed under the Midsolar Murders series, so there’s probably more on the way too, and I’m excited to see where Mallory goes after this explosive start.

I just started reading Cooling effect by Valerie Valdes, the first in a series (which does not appear to have a series title) about Captain Eva Innocente and her crew. The third book was just released recently, and the publisher also sent me the first two books so I could catch up. Eva had tried to leave behind her father’s twisted doings, taking only legal (but less lucrative) jobs, but when her sister was kidnapped by The Fridge, a criminal syndicate, she is forced to perform missions for them to pay the ransom. There hasn’t been a murder in the book yet, but it’s still early days. I also enjoyed a LEGO photography book called Focus on LEGOwhich I will tell you more about soon.

Disclosure: I have received review copies of the books covered in this column, except for Fugitive Telemetry, which I bought myself. Affiliate links to Bookshop.org help support independent booksellers and my writing!

Like? Take a second to support GeekDad and GeekMom on Patreon!