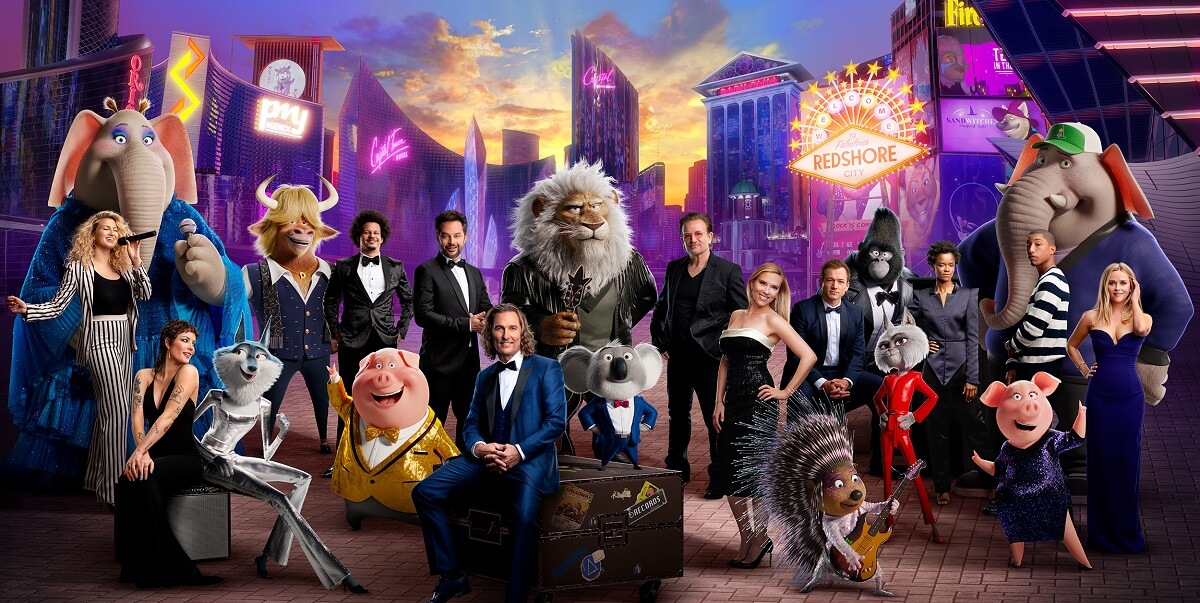 The animal gang that sang in our hearts is back and trying to get big in the animated sequel Sing 2. Written and Directed by Garth Jennings, Sing 2 finds Buster Moon the koala (voiced by Matthew McConaughey) in charge of a hit show airing at his New Moon Theater. But Buster doesn’t just entertain the local crowd. He wants to take his star animal artists to Redshore City (think Las Vegas), sure they can make it big.

After a talent scout (voiced by Chelsea Peretti) warns him that he will never make it to the big leagues, Buster Moon becomes depressed and wonders if he and his cast of performers have gone as far as they can with their talent. A few choice words from Nana (voiced by Jennifer Saunders) later and Buster Moon becomes convinced that all he and his gang need is a chance to audition for Mr. Crystal (voiced by Bobby Cannavale) in his Redshore theater. City.

Thus, Buster brings together Rosita (voice of Reese Witherspoon), Ash (voice of Scarlett Johansson), Meena (Tori Kelly), Johnny (voice of Taron Egerton), Gunter (voice of Nick Kroll) and Miss Crawly (voice of Garth Jennings) and heads towards Redshore City. After some fun and clever laughs, they find themselves on stage ready to audition for Mr. Crystal.

It’s not going well and just as he’s about to kick them off the stage, Gunter reveals his idea for a sci-fi musical and Mr. Crystal immediately clings to the possibility of a science fiction musical extravaganza. To seal the deal, Buster Moon makes it sound like they’ll be able to get permission to use songs from legendary lion rock star Clay Calloway (voiced by Bono from U2). Plus, they can even play it in production.

That means Buster Moon and the gang must write, choreograph, and stage an epic musical in just three weeks. They must also not only find Clay Calloway, but also convince the musical legend, recluse for 15 years since the death of his wife, to agree to play the main role.

Vibrant, energetic and funny, Sing 2 is a sympathetic and charming sequel that brings Buster Moon and his talented performers into the open and surpasses the original film. He raises the energy level and the bar with spectacular musical numbers, giggles and even a few heartbreaking moments.

Matthew McConaughey returns to his role as master showman Buster Moon and is perfect again as a small, almost always optimistic koala who believes in his performers and is willing to do anything to be successful. He brings Buster Moon to life with the right mix of energy, sympathy, and self-doubt.

Scarlett Johansson shines as the voice of Ash, the gorgeous-voiced porcupine who joins the gang and becomes Buster Moon’s fiercest ally in an attempt to convince Clay Calloway to star in their musical. The scenes between Ash and Clay are sweet and even a little touching, and Johansson and Bono bring these two characters to life wonderfully. It is their scenes that give the film its soul.

The great musical productions of the third act of the film are visually impressive and feature great songs. The finale using U2’s â€œI Still Haven’t Found What I’m Looking Forâ€ is a show-stopper.

Sing 2 is an enjoyable, enjoyable, and enjoyable film that will have audiences humming and tapping their feet as they exit the theater.

10 of the most unique Airbnbs in and around San Antonio