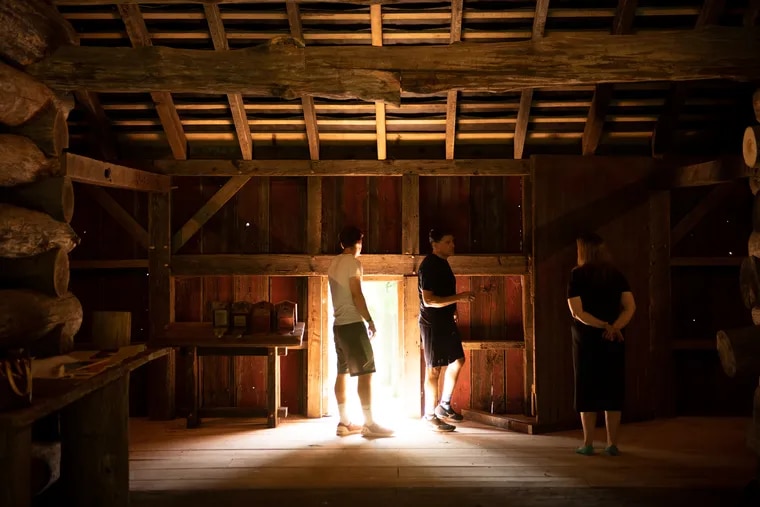 It was early fall 1777, and the war was going badly for the American settlers.

From his base in Tredyffrin Township, British General William Howe plundered the countryside in an offensive that would see him lead the British to victory in the Battle of Brandywine and ultimately occupy Philadelphia.

Part of a headquarters complex, possibly used to keep officers’ horses, was a sturdy log barn built about half a century earlier in what is now Berwyn, according to the Tredyffrin Historic Preservation Trust.

It was a common sight at this time throughout the mid-Atlantic: a two-story wooden barn built into an embankment, the upper half used for threshing grain, the lower half perhaps for cattle.

Almost none survive in eastern Pennsylvania, and of those that do survive, none are likely older than Jones Log Barn, now tucked away in the Chesterbrook development in Wayne.

And none were perhaps less likely to enter the 21st century well.

Twenty years ago, the barn collapsed and its owner planned to demolish it to set up an estate. But starting this fall, it will become the Jones Log Barn Living History Center, chronicling farm life in 18th-century Pennsylvania, Tredyffrin’s role in the War of Independence, and the building of barns like it.

It was an unlikely survival, a mix of logs from the original and decades in between, reassembled from its original location 1.8 miles away. It was made possible through donations of money and materials, and guided for nearly 20 years by Pattye Benson, who heads the Tredyffrin Historic Preservation Trust.

â€œI come here naturallyâ€¦ our local history is what makes each community unique,â€ â€‹â€‹said Benson, a Washington native who lives with her husband, Jeff, on a 1690s stone farmhouse in Tredyffrin where they run a bed and breakfast. breakfast called Big Valley House.

Benson calls the barn “a tangible reminder of the rural heritage of the township of Tredyffrin, a glimpse into 18th century farm life.”

But, she said, “I didn’t expect it to take that long.”

The area’s architectural historians consider the barn to be an outstanding example of early Welsh-American construction.

And while saving him was an easy call, where to put his reincarnation was harder – not to mention raising money after the Great Recession. The original location, now private land, was not available, and although there was talk of installing it in a local park, local curators believed it was not historically appropriate.

READ MORE: Want to see if the British looted your house during the War of Independence? Now you can.

So after the original barn was dismantled in 2001, logs that could be used were stored in two barns in Valley Forge National Historic Park and Tredyffrin Township, as a search for a new location. Slowly.

The search ended at the Duportail House in Chesterbrook, a 1740s property with an adjacent 1790s barn that is now used as a wedding venue.

The farm, which over the decades served primarily as a private residence, was named after French General Louis Duportail, brought to the United States by Benjamin Franklin to serve as chief field engineer for the colonial army. The land on which it stands was purchased by Fox Cos. in 1974 and incorporated into the development of Chesterbrook when it was approved four years later.

A second barn on the site had burned down in 1985, and the Jones Log Barn, named after one of the many previous owners, would be rebuilt in what is essentially the “footprint” of this building.

Benson recalls a prominent curator, the late Neil McAloon, who owned the property containing Howe’s headquarters, saying, “Pattye, this is where the barn is supposed to go.” “

About $ 500,000 was raised for the current project, but Benson said that figure was misleading because so much was given in kind.

Non-cash donations ranged from tools and farm equipment to the Continental Army Brig headquarters. General Enoch Poor, donated by Frederick and Lura Wampler of Wayne, to a whole historic barn (for usable timber) from Fritz Lumber Yard to Wayne and his owners, the Eadeh family.

Benson describes the reconstruction – which took about three years – as in part “the” marriage “of two historic barns: the original Jones Log Barn and the Fritz Barn”, built in 1863, which also included cladding, doors, hardware and vintage boards. .

The architectural plan was drawn by restoration architects Frens & Frens of West Chester, and the log assembly was done by Scott Walker, a Montgomery County carpenter who grew up in Atlanta and was intrigued by the work in the southeastern Pennsylvania because “that’s where the barns started.” These are the oldest buildings we have.

He specializes in barns, although his other woodwork includes the bar at Israeli restaurant Zahav in Center City.

He said he finds the 21st century tends to view barns as â€œplaces to store thingsâ€ rather than vital parts of everyday life.

Because much of Jones’ lumber barn was unusable or missing, the fresh logs must have been sought out as closely as a simple drive to Lancaster County and State College: White Oak for insect and rot prevention, live oak, hickory, soft gum.

One third of the floor, half of the rafters and one quarter of the roof system and door jambs come from the original barn.

And the barn could not be assembled on its current residential site because, said Walker, “I couldn’t make it a construction site.”

So that meant working on half a dozen sites around the area, peel logs in 100 degree heat or 20 degree cold or rain.

At one point, Deane Madsen, of Coatesville’s Madsen Tree Service, picked up logs an hour south of the main site to insert them into a frame.

The living history exhibits, designed by Miller Designworks of Phoenixville, were largely mounted on materials from the original barn and complemented by tables and benches made from original materials. They include, for example, a primitive seed separator dating from around 1900.

They were installed on a few sparkling September days, worn by company president Steve Miller, with the help of his son, Mason, as Benson watched.

The Jones Log Barn Living History Center will be open seasonally from April 1 to October 30 and other times by appointment. For more information or to arrange a visit, contact Pattye Benson, President of the Tredyffrin Historic Preservation Trust, at 610-644-6759.