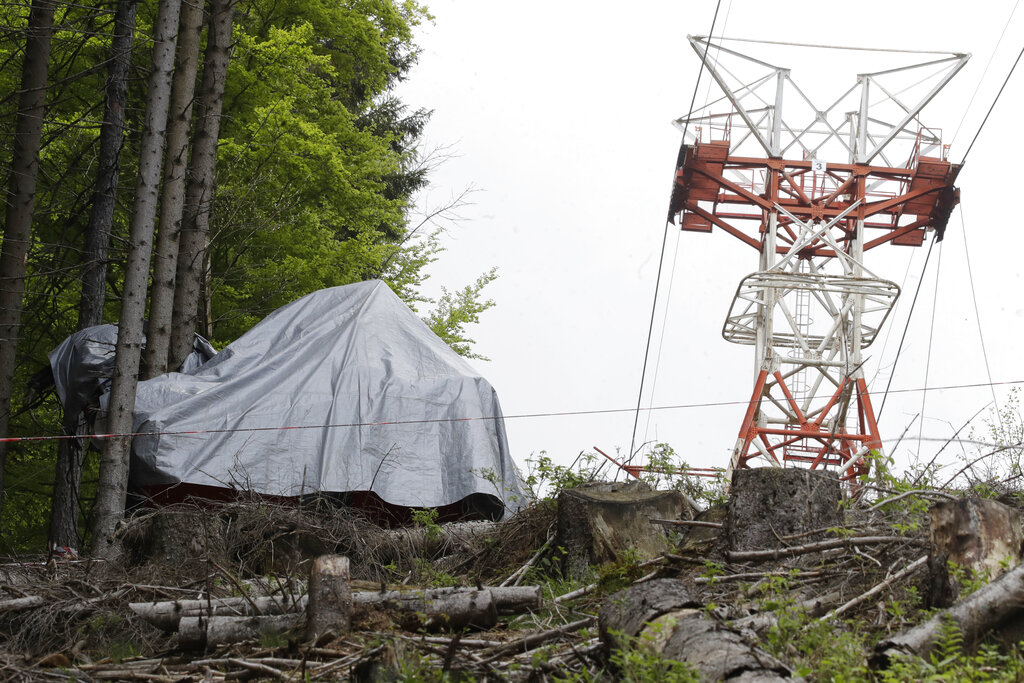 
ROME (AP) – The three suspects in the Italian cable car disaster that killed 14 people were allowed out of jail on Sunday after a judge said most of the blame fell on just one: a service technician who intentionally deactivated the car’s emergency brake because it continued to spontaneously lock.

Judge Donatella Banci Buonamici said there was not enough evidence to suggest that the owner of the Mottarone cable car company, Luigi Nerini, or the head of maintenance, Enrico Perocchio, knew the technician had disabled the brake several times even before the disaster of May 23.

After assessing the prosecutors’ request to maintain the detention of the three, Buonamici ordered the release of the leaders while allowing the technician, Gabriele Tadini, to go under house arrest. The three men, who are still under investigation, left Verbania prison early Sunday, accompanied by their lawyers.

2 dead and more than 20 injured in banquet hall shooting

Fourteen people were killed when the lead cable of the Mottarone funicular overlooking Lake Maggiore in northern Italy broke and the emergency brake did not prevent the cable car from rolling back on the support line . The cable car completely left the line when it struck a support pylon, crashed to the ground, and then hurtled down the mountain until it was stopped by a grove of trees.

The only survivor, Eitan Biran, 5, remains hospitalized but conscious, his aunt looking after him. Eitan’s parents, his younger brother and his great-grandparents were killed in the disaster.

It is not known why the traction cable broke.

Italy’s Piedmont region observed a minute of silence at noon on Sunday and flags flew halfway to mark the moment a week ago when disaster struck.

Tadini admitted during questioning that he left a fork-shaped bracket on the cable car’s emergency brake to deactivate it as it continued to lock while the car was in use, his lawyer, Marcello, said. Perillo.

Speaking to reporters outside Verbania prison, Perillo said Tadini would never have left the rack in place if he thought it could endanger passengers.

“He’s not a criminal and would never have let people ride with the brake system locked if he had known there was even a possibility the cable had broken,” Perillo said. “He can’t even begin to understand the fact that the cable broke.”

Prosecutors had speculated that Tadini officials knew about the manually operated brake and had an economic reason to use it to operate the funicular. Prosecutor Olimpia Bossi said the owner should have taken the entire elevator out of service for the larger and “sweeping” repairs needed to fix the faulty emergency brake.

The elevator only reopened on April 26 after a long COVID-19 shutdown and was preparing for the summer tourist season in a scenic part of northern Italy.

But lawyers for Nerini and Perocchio said the two denied knowing anything about Tadini’s maneuver and said they had no reason to let a cable car without a brake system operate.

Get the 5 things to know to start your day every morning, click here to subscribe to [Your Morning] NewsNation newsletter.

Nerini’s attorney, Pasquale Patano, said the owner “had no interest in not fixing the cable car” since he was paying a flat rate of 150,000 euros ($ 183,000) per year for the unlimited maintenance of the cable car. ‘an outside company to keep the funicular safe and operational.

Perocchio also denied any knowledge of Tadini’s maneuver, according to his lawyer Andrea Da Prato, who suggested his client was arrested because the prosecutor felt compelled to produce quick results in the investigation into the tragedy.

Upon leaving prison, Perocchio said he was “hopelessly sad” for the victims and would never have allowed the emergency brake to be deactivated.

“I have been working in cable cars for 21 years and I know there is no reason in the world to do it,” he told reporters.