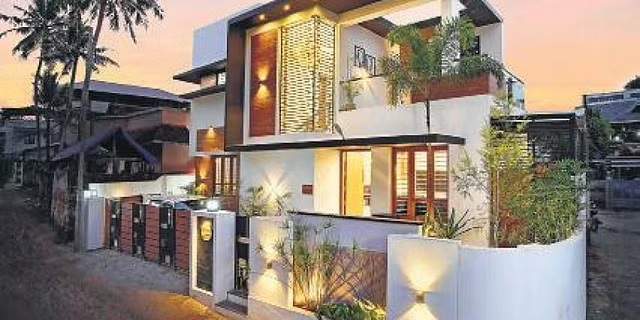 Spending a fortune of life savings on a house is and has been followed religiously by many Malayalis. However, the need to build a dwelling on a large piece of land now seems to be a thing of the past. As the price of building materials, land and wages have skyrocketed, many now prefer to build homes on smaller plots – as small as 2.5 cents of land!

According to the architects, the demand for building innovative houses on a small lot, sometimes below 10 cents, has increased over the past five years. However, building a house in minimal space is a challenge in itself. It calls for unique designs. In Kochi, there is such a house that would turn quite a few heads – the dream abode of famous architect L Gopakumar. He came up with the idea of ​​designing a house in town for 6 cents.

“People wanting to build houses on small plots is not a trend, it’s a mandatory option. The affordability factor is an issue, especially when living in cities,” says Gopakumar. To complement the unique plot layout, which was more pitched than ninety degrees, Gopakumar added a sloping element to the elevation. Although the structure looks boxy from the outside, it is designed at 2,944 square feet and is more spacious than seen from the outside. “The biggest challenge was to design a comfortable, airy and spacious building. To achieve this, I had to divide my creations. Inside, it is well protected with minimal openings, which is why it has a square design,” adds Gopakumar.

The common areas have been designed in a semi-open style. The family living room, dining room, kitchen, home theater and laundry room are all visually connected. The family living room and dining room are part of a spacious open hall. In the formal living room, instead of a concrete wall, the space has been transformed into a chic shelf with a veneer rafter to provide privacy. The roof is made flat for the solar panels. The house is also known for its minimalist interiors. The rooms are also spacious and well furnished.

Gopakumar’s house challenges the stereotype associated with houses built on small plots. “There is a social stigma, that when you live in a smaller plot, your social status also goes down. More than a utility, a house is seen as a symbol of social status, which has led many to opt for large dwellings. If you’re a family of 3, design it accordingly and don’t waste resources on occasional guests,” he says.

According to architect Arun TG of Graphite Homes, people are now accepting the concept of spatial utility. As families become nuclear, homes are designed to bring their members together. When spaces are connected, it saves time and gives the family the advantage of being closer,” he says.

The architect proposes the idea of ​​multipurpose rooms. “In this way, the cost of construction is reduced. A bedroom with a folding door can be a living space during the day. At night, it can be a bedroom by modifying the same door. Similarly, convertible furniture is also another idea – a sofa can be converted into a bed according to our taste,” says Arun.

To be open
Arun says that by avoiding many walls and adopting an open concept, interiors can become spacious. Avoiding dead spaces and using them in a more useful way would be another feasible idea. “For example, the space under the stairs is dead space. So you can use it as a sink counter,” he says. Avoid bulky furniture and heavy curtains, he adds. Previously, people preferred large bedrooms. Now many are looking for refined spaces by reducing the surface area by adding walk-in closets.

Among the many small plot projects Arun has done, the four hundred contemporary style house in Nemom, Thiruvananthapuram is special. The house looks like a cabin in the front. “The cabin is shaped similar to an outside seating area in a cost effective manner. The seating area is on the first floor, this gives members the freedom to sit outside fearlessly at night, as it gives a sense of security he says.

Young people prefer small plots
According to Santhilal, coordinator of the Center of Science and Technology for Rural Development (COSTFORD), young people opt for these minimal plots, unlike the older generation. “They’re not interested in investing a lot of their income in building a house, so a four-hundred lot is ideal for them. This demand increased when working from home was introduced. After spending a lot of time inside the four walls, the idea of ​​having your own home developed,” says Santhilal.

The Five Clearest Lakes to Visit in Colorado