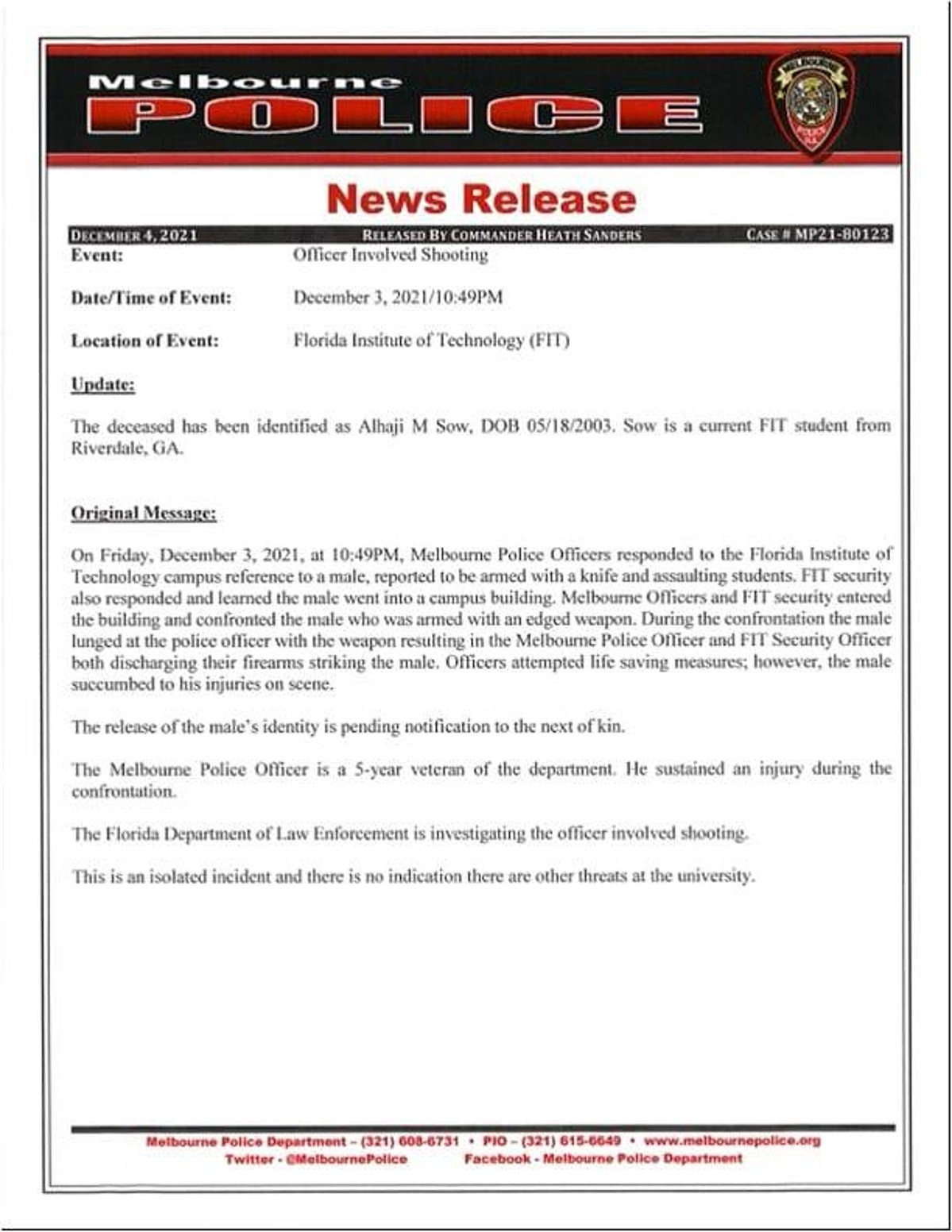 A Florida Institute of Technology sophomore studying aviation science has died after police say he attacked students on campus with a knife last night.

Melbourne Police and FIT Security responded on Friday, December 3, 2021 at around 10:49 p.m. after receiving reports that a man was “armed with a knife and assaulted students.”

They located him in a school building “armed with a knife”. When confronted, the Melbourne Police Department alleged that the man “rushed at the officer with the gun.” In a written statement from Commander Heath Sanders, Melbourne Police said both their officer and the security guard shot the man. They attempted rescue measures, but he died at the scene.

The suspect is identified as Alhaji M. Sow, 18, of Riverdale, Ga.

The policeman involved was injured and is receiving treatment. Other than the fact that the officer is a male who has worked in the department for five years, his identity, as well as that of the FIT security officer involved, has not yet been disclosed. An investigation is still ongoing.

Many university activities were canceled throughout the weekend and the school is mobilizing support staff to help students affected by the incident. It is not known if any students sustained physical injuries.

“A message from the President:

Life is unpredictable. Unpredictable situations arise. These are facts of our daily life. The Friday night campus incident where a suspicious student died after allegedly threatening and injuring others is what we encounter today.

We are not defined by our losses, but I believe we can be defined by how we deal with them. We can’t stop bad things from happening in life, but we can control how we work together to persevere through them. We can look after each other. We can find ways to be safer together. We can use the lessons of life’s trials and tribulations to grow stronger, both as individuals and as a community.

My heart goes out to all who suffer. I mourn any loss of life, while remaining firmly grateful to the men and women who invest their lives to protect us. The safest college campuses are where students, staff, faculty, and others look out for each other. We do it at Florida Tech.

I want every member of this university community to know that we will be going through this, together. Advisory and support services will continue to be available to the entire campus community in the coming days. We will learn from it, together. And we will be the strongest.

Below is a statement from the Melbourne Police Department:

Utica police officers were patrolling downtown Utica “back then” See if you can guess the locations from the 1940s and 1950s.

12 of the best golf courses in Oneida County

Oneida County has 30 golf courses within a 28-minute drive. Here are 12 of the best courses in Oneida County.