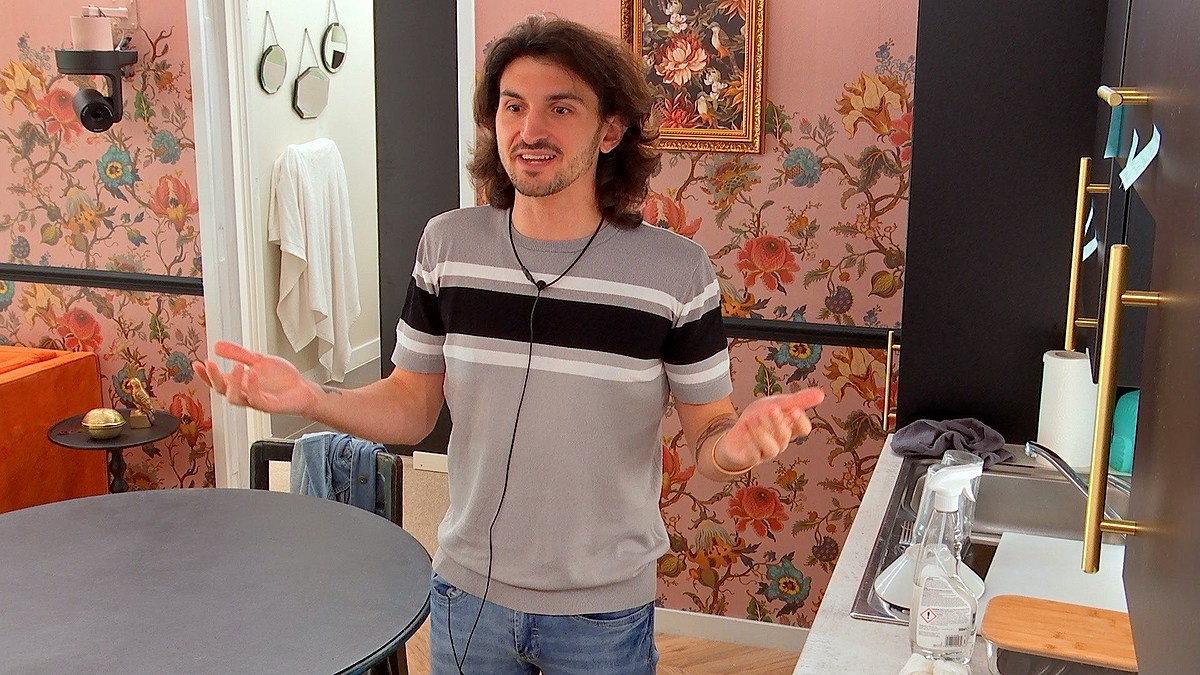 The fourth season of ‘The Circle’, a Netflix reality show, started this month and one of the contestants is a 24-year-old Hoboken resident who grew up in West Caldwell.

If you’ve never seen the show, players “enter The Circle” and move into an apartment, and build relationships with other players through an app, hoping to gain their trust and popularity.

We recently discussed growing up in Jersey and what it’s like to be recognized on the streets.

Where are you from in Jersey?

“I’m from West Caldwell, New Jersey. I went to James Caldwell High School, class of 2015. I did acting, backing vocals, many after school singing programs, played football for four years, golf for four years and I swam for one. I was trying to be as active as possible.

Where did you go to college?

“I went to Quinnipiac University, Go Bobcats! I was involved with 230, which was our TV station, and I was part of our radio station WQAQ. My favorite activity that I was involved in during my four years was my fraternity Pi Kapp which was fun I worked a lot with our athletic department that’s when I started getting my feet wet doing social media and content creation, which is awesome. Kudos to my Quinnipiac girls volleyball team, they basically gave me my first social media job and for believing in me.”

Where do you live now?

“I currently live in Hoboken.”

How has it been going out in Hoboken since it aired?

“It’s been weird in a good way. It’s weird to be recognized and people want to take a picture with you. So it’s weird to get used to, but it’s really cool, I like when people come up to talk to me It’s been a lot of fun Last night for the first time someone looked for me in a bar Someone said “I came here because I know you like come here. But it’s still pretty cool to be part of the culture and people know who I am when I walk past.”

What are your favorite places to go in Hoboken?

“Empire Coffee Company. I go there every morning for a coffee because I couldn’t spend my day without it. They have the best staff in the world, I love them. I always frequent Mulligan’s pub, this is my favorite place to have a drink, for some reason whether it’s monday or saturday night i will be there. That’s probably why I love him. big fan of Fiore Deli and Losurdo Deli, two totally different animals of course. But I love them both. Go out for a bite to eat, I like to go to by Zack. Oh and by AlessioI love Alesseo’s.”

“I’m going to go close to home and it’s going to be off the charts for most people, but hopefully I get some respect for it because that’s where you were born and raised, you stay there .I have been going to this place since I was 7 or 8. It would have to be At Russillo’s at Calwell. It’s just this place when I come home on a Friday we get pizza from Russillo. It’s just like home.”

What was going through your mind when you applied?

“When you apply for an open casting call, you never think you’ll get an answer. I applied on a whim because at the time I was between jobs and unemployed. When I applied for the casting, I also applied for the job that I currently have, and I was like “whatever I get first, I do. I happen to have had both, which is really lucky. They were like, ‘You’re going, you’re going to England’ and I was like, ‘I have to do this’.”

How did you explain the show to your mother before continuing? Had she looked at him?

“When I applied for the show, my mom had only seen it in passing because my sister and I were big fans of the show. When I left for the shoot, she binged it , and she loves it. She’s watching our season now, on the edge of her seat like her son isn’t even there.”

What preparation did you put into catfishing as Carol?

“As far as the actual gameplay, none. I got into this mentality of I can play the character very well, I know her too well, and I made a lot of in-game decisions, like my profile. Her work in the show is something in the media, which was more about what i did, but it doesn’t do it in real life, i did facetime my sister though, because i remember that in season 2 jack got caught being a makeup dummy challenge catfish, and he didn’t know how to do it and he was playing a girl so my sister gave me a tutorial of basic makeup like enough to know how my mom was going to do her makeup I kinda screwed up cause it ended up I do cake decorating not makeup But either way I can put you on false eyelashes if you need them.

What about people who think you’re a catfish?

“Everyone who watches the show has realized that people understand that I’m a catfish, but they don’t care. Which is kind of funny. That was kind of my mentality, this game doesn’t catch the fish -chat. This game builds relationships, and I’ve always been good at that. It shows sometimes that you just need the relationship more than you need to believe who you are.

What’s it like to see him on TV again?

“A funny part is that you obviously only know the conversations that you’re having when you’re filming it. And I didn’t see the show until it came out. In every conversation, it sort of goes back to this What do you think of Carol. I didn’t realize how much real estate I had in everybody’s head. It was fun, my old man credentials that I could just pull out of my back pocket, like the one from Prince, when Everson joins the game. During the party scene, you don’t see us dancing, but the song we danced to was “I Will Survive” by Gloria Gaynor, and you don’t see it, but we were talking about dancing and I said something like ‘Oh Gloria Gaynor, that brings me back’ and everyone I’ve spoken to since filming the show said they were convinced I was a fish -chat, and that discouraged them. »

What was it like being filmed all the time?

“It’s crazy, it’s so interesting because I think there are 12 cameras around the apartment and they’re always on. They obviously respect your privacy to change and take showers etc. But there there are times when you do things that you don’t even realize that I’m just living and they’re filming you and people realize that. Like day one, I was making chicken, and there’s a whole subreddit about my chicken that I made because it looked really good and people asked me for recipes.”

What did you do to pass the time in The Circle besides cooking?

“I played a lot of guitar, obviously you don’t see much because of the copyright of the songs. I wrote a lot of stand-up songs, at the beginning you see me with a blue notebook, in the first batch of episodes, it’s just my stand-up notebook. I didn’t take notes during the entire filming of the series. I would just modify my stand-up to pass the time. There was a maze game marble which I must have done hundreds and hundreds of times and never beat it which was very upsetting as it’s an elementary level maze and I have a masters degree and couldn’t complete it .I also had a slinky, lot of trinkets to pass the time.”

Who was your biggest threat at the end of Episode 8? To be in it and watch it?

“Yu-Ling back and forth. When I was there, Rachel also felt like a threat, but now looking back, she wasn’t a threat, Rachel was the person in the game if you tell her something, she’d listen. For example, Nathan immediately wrote her off, and then they had a conversation and were like, ‘We’re all fine, we’re friends now’.”

We are coming another summer to the Jersey Shore! Before you lose yourself in the excitement of sunny days on the sand, we calculate how much seasonal/weekly/daily beach beacons will cost you, and pre-season deals you can still take advantage of!