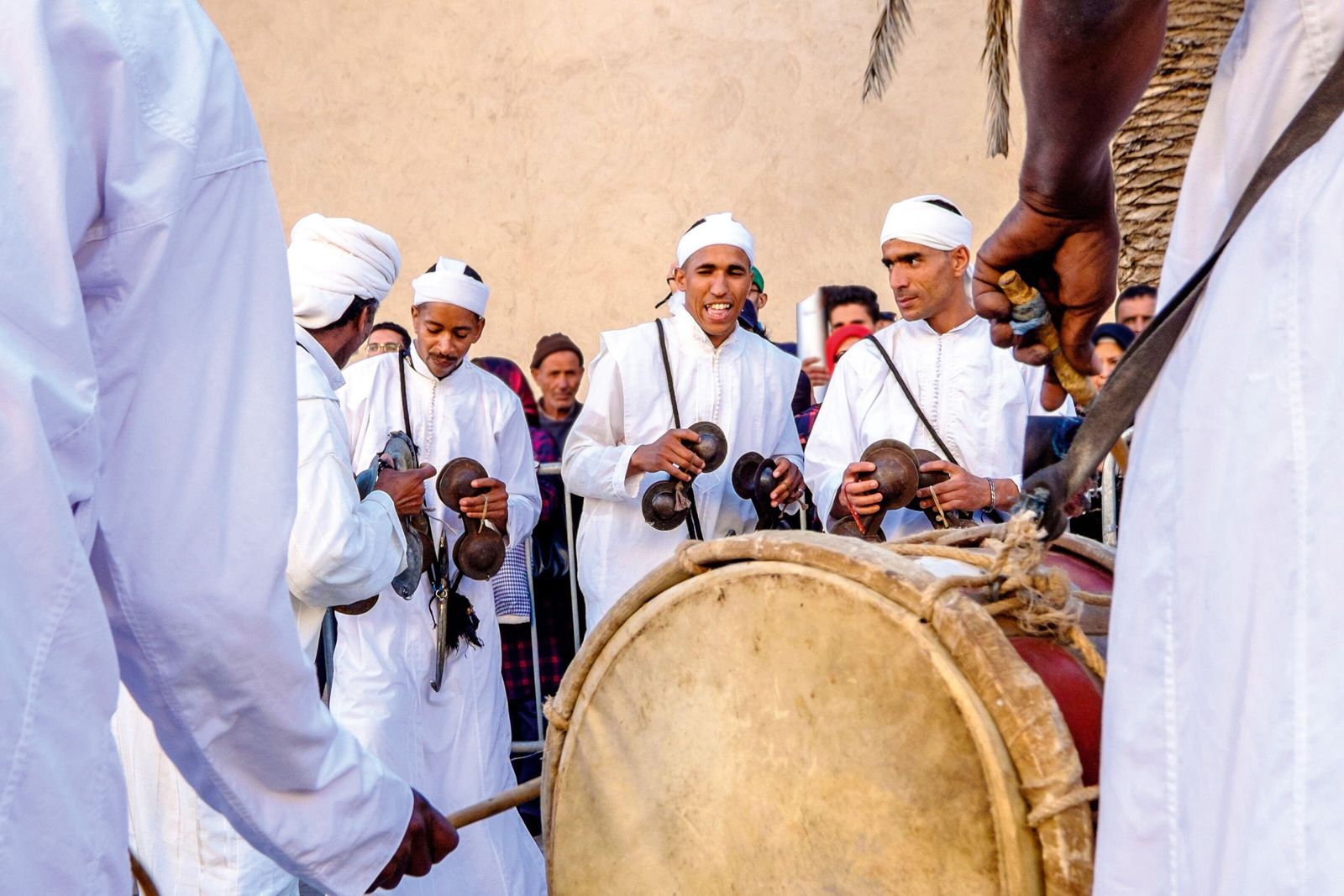 Insomnia in Essaouira: closer to the fascinating Gnawa culture of Morocco

It is dusk in Essaouira. There is a dotted afterglow that stains the Atlantic horizon, and the last kitesurfers leave, barefoot, to their excavations. Behind the beach, snail vendors serve steaming cups of soup from their little carts. As the swirl and cry of the little sea gulls begin to fade away, the other characteristic sound of the city resounds: a persistent metallic rhythm, bouncing off the city walls. Clackety-clackety-clackety-clackety. It’s the sound of krakebscastanet-shaped hand cymbals unique to one of Morocco’s most distinctive musical traditions: Gnawa.

Spend more than a night or two in any Moroccan city and you’re sure to come across a Gnawa band, playing in restaurants or strolling through squares. With krakebs setting the tempo, they rip bluesy tunes out guembris – three-string lutes with an elongated drum-like body made of wood and camel skin – then layer vocal call-and-response melodies in Darija Arabic, Amazigh and Bambara. Often they weave claps and bass tbilat drum beats for extra percussive force.

Most members of this scattered community can trace their ancestry back to the medieval Sudanese empires – the part of West Africa that now includes Senegal, Mali and Guinea – and were therefore ethnically marginalized. But things have started to change: in a modern and increasingly multicultural Morocco, their sub-Saharan origins are celebrated. Essaouira, the diverse city they have adopted as their capital, is the best place to witness an authentic Gnawa show.

Almost any party will do, but this one is special. On a large temporary stage under the crenellated walls of the city, more than 100 maalems (master musicians), kuyous (dancers), mqadmats (mistresses of ceremonies), flag bearer (flag bearers) and mbakhrats (bearers of incense) gathered en masse. The lighting technicians and cameramen turn in circles; this gala will be televised. It is the belated celebration of a monumental honor: in December 2019, UNESCO inscribed the Gnawa culture on the lists of intangible cultural heritage of humanity.

Exuberant artists, the Gnawa groups are essential to watch. Flamboyantly dressed in embroidered tunics, slippers and caps adorned with cowries and topped with long pompoms, they take turns dancing. As their songs get faster and faster, they launch into dizzying spins and Cossack-style knee bends, bobbing their heads in time until their acorns roar like blades of helicopter.

Behind the apparent casualness, there is a serious and spiritual side. Traditionally, the Gnawas specialize in expelling evil spirits by performing lilac, dusk-to-dawn sessions of trance-inducing music and dance. “We learn as children, from our parents and grandparents,” say the maalems I meet backstage. “It’s an essential part of our Sudanese heritage.” With its on-demand exorcisms and Senegalese textile traders, there are times when Essaouira feels much closer to West Africa than its geography suggests.

The morning after the gala, the postcard-perfect city feels even more relaxed than usual. Jewelers and sellers of marquetry boxes smile happily as I walk through the orderly medina to the ramparts, where Moroccan tourists pose for selfies. Only the fishing harbor looks as busy as usual, with blue-painted boats crowded together after a long stretch on the water, and gulls vying for the catch. Planning lunch at a take-out restaurant – a basic place where the chefs will season, grill and garnish all the ingredients you show up with – we select some succulent fish.

Later, in a relaxed rooftop bar, I chat with young Gnawa musicians at the end of their set. “Thanks to regional competitions, the festival and now UNESCO, interest in Gnaoua music is really on the rise,” says the 21-year-old. guembrist Abdljbar Aytmamass. “It’s hard to make a name for yourself, though. All the big gigs go to the big stars.

“Yet we continue to play,” adds the teenager krakrebist Abdrahim Essalhi. “Music is in our blood. It’s not a choice. It’s a calling.”