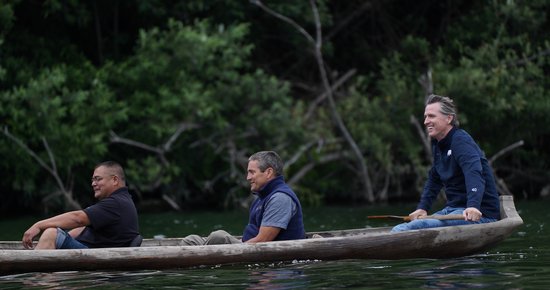 “We are working with Governor Newsom on a number of issues related to natural resource management, environmentally sustainable economic development and the protection of cultural resources, all of which we have discussed today,” said President James. “We invited Governor Newsom to go on a canoe trip because we have so much to celebrate. I would like to thank the Governor for his continued support to our most important goals.

“The Yurok Tribe and Governor Newsom are redefining the relationship between the state and sovereign tribal nations. For the first time, the Yurok Tribe has an equitable government-to-government partnership with the State of California, ”added Frankie Myers, Vice President of Yurok. “Through strong leadership and mutually beneficial partnerships with tribal, state and federal governments as well as private entities, we have significantly accelerated the growth of the Yurok Nation.”

Shortly after Governor Newsom was sworn in in 2019, the Yurok Tribe maintained a close working relationship with the Head of State. Through this formal partnership, the tribe has made great strides in several key areas. The tribe invited Governor Newsom to the land of Yurok for an in-person update on the progress made through the joint effort. The tribe also wanted to personally thank the governor for including tribal representatives in the state’s decision-making process.

The Yurok Tribe plays an important role in shaping state policies that impact tribal and non-tribal citizens. Yurok’s representatives sit on the California Historical Truth and Healing Council as well as the State Board of Education and Homeland Security Advisory Committee. Most recently, President James was selected to serve on an advisory group that will set guidelines for a new state program, which will invest $ 20 million annually in tribal projects.

The tribe and the state are collaborating on a number of important initiatives. For example, the State is a partner in the projects to reintroduce the condor and remove the Klamath dam. Earlier this year, Governor Newsom resolved a long-standing obstacle to the decommissioning of fish-killing dams, which are slated for removal in 2023. Last year, representatives of the Yurok Tribe and California signed off on it. first agreement of joint powers between a tribal group. government and state. The historic agreement transferred the operations of the Stone Lagoon Visitor Center (now called the Chah-pekw O’Ket’-toh “Stone Lagoon” Visitor Center) to the tribe. The tribe also regularly coordinates with California agencies on river restoration projects between central and northern California. Later this summer, the tribe’s award-winning watershed restoration team will repair salmon habitat at a local state park. There are also other examples of coordination between the Yurok tribe and the state.

The frequency and scale of these cooperative efforts quickly accelerated after Governor Newsom apologized, via landmark Executive Order N-15-19, for the state-sanctioned violence inflicted on the native population of California. Following the June 2019 ordinance, Governor Newsom established the Truth and Healing Council and pledged to strengthen government-to-government relations between the state and the tribes. The Truth and Healing Council was created “to provide Native Americans in California with a means to clarify the record – and provide their historical perspective – on the troubled tribal-state relationship.”

“Today, the relationship between the Yurok Tribe and the State of California is finally moving in a positive direction. I never thought I would see the day when a sitting California governor would accept an invitation to take a trip in a traditional canoe. There is still work to be done, but we would not be in the positive position we find ourselves in today without Governor Newsom’s forward-looking leadership, ”President James concluded.

Proposed and developed by Yurok President Joseph L. James, the Yurok-owned business was developed to diversify the tribe’s ecological economic portfolio. Redwood Yurok Canoe Tours offers a unique opportunity to travel in a traditional hand-carved boat on the majestic Klamath River, through the tallest trees on the planet.

Interactive tours are ideal for families and groups of friends who want a life-transforming trip. Participants also have the chance to paddle in masterfully constructed redwood canoes, identical to those the Yurok people have used since the dawn of time.