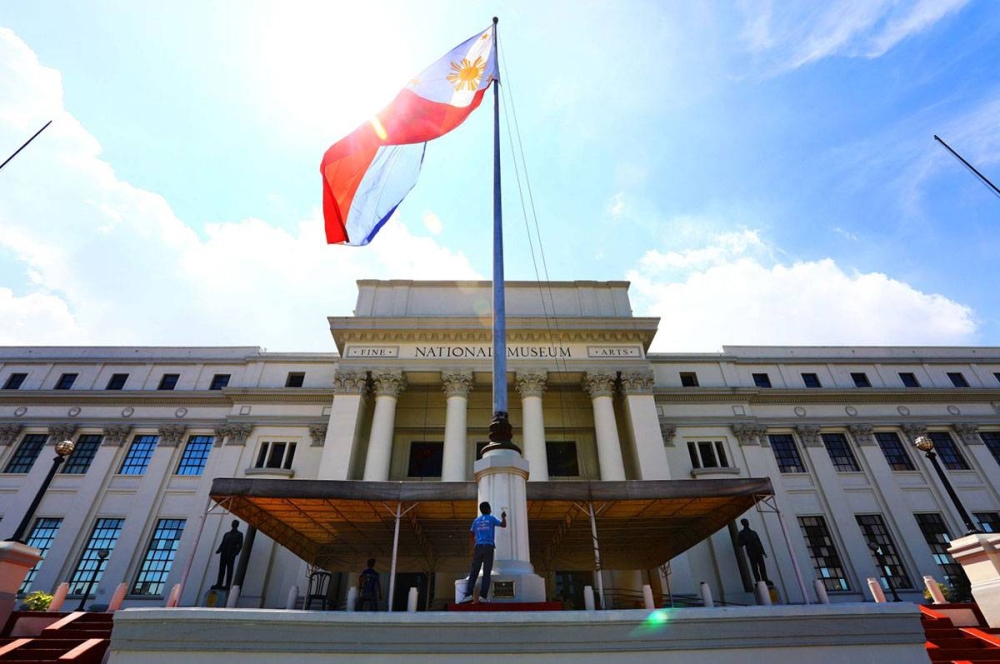 A worker paints the finishing touches to the flagpole of the National Museum along Padre Burgos in Manila on June 2, 2022. (PHOTO: MIKE ALQUINTO)

As FVR goes to his reward, his military, political, and personal accomplishments are given due consideration and appreciation.

An act was not mentioned. It was FVR during his time as President that paved the way for the National Museum to have a permanent home. And there it is with three beautiful neoclassical buildings housing Anthropology, Fine Arts and Natural History. The National Museum was established as a government trust, an institution that aims to be educational, scientific and cultural, a depository of documents, artifacts and a guardian of the heritage of Filipinos. And he’s there in permanent residence, thanks to FVR.

Prior to that, for nearly a century, our National Museum was a homeless tenant or entity that found itself moved from one government office to another, none of which was a home to it. He was treated like a poor relation, tolerated but hardly welcomed by other government agencies to share their space.

The past history of the National Museum is one of impermanence, abrupt changes and many dispensations. Originally the Museo-Biblioteca created by a royal order of the Spanish monarch on August 12, 1887, it materialized in October 1891 on Cabildo Street in Intramuros next to the Casa de la Moneda, the Mint of the Philippines. Some time later, it was transferred to Quiapo (Calle Gunao, name that no longer exists) until the American Occupation, then it was summarily abolished by the Philippine Commission of 1901 and replaced by a Museum of Ethnology, of Natural History and Commerce under the Department of Public Instruction. It was intended to complement another agency created by the Philippine Commission – the Bureau of Non-Christian Tribes – which seemed to have generated much interest from the American occupiers.

Get the latest news

delivered to your inbox

Then came the St. Louis Exposition of 1904 where members of the tribe were sent to be part of the exhibits and a name change – Philippine Museum covering ethnology and natural history, still under the Department of Instruction public. The year 1916 brought another development in the cultural field – a fine arts division was incorporated into the National Library and Archives of the Philippines, which appears to have been a single entity at the time. They called it the Library and Museum of the Philippines, this time inexplicably under the Department of Justice. During this time, History and Ethnology were left to the Museum, placed under the supervision of the Bureau of Sciences.

From 1928 to 1939, a national museum of name was established under the Ministry of Agriculture and Natural Resources; It’s hard to explain the logic of this move, but at least he assessed a building in the port area that he occupied briefly. In its new identity, the National Museum had Ethnology, History and Fine Arts, but Natural History was not included. Then another reversal came in 1933, Fine Arts was taken out of it and placed under the responsibility of the Library of the Philippines. But there remained ethnology and a new addition, anthropology and its subset of subjects. Natural history still belonged to the Office of Science. In fact, the National Museum itself was under the Office of Science, although in 1939 it finally received natural history. These changes were perhaps part of a natural evolution as the government set up its cultural agencies.

But the 1945 Battle of Manila destroyed everything gathered in all the cultural agencies, leading to the loss of entire collections, which meant that after the war, what had been lost had to be recreated. Natural History and Fine Arts were once again returned to the National Library (new name for the Philippines). What remained of the National Museum was placed under the management of the Executive Secretary and eventually transferred to the Ministry of Education. Thus, he continued his nomadic existence with parts given or removed.

He went from place to place. Gemma Cruz-Araneta, former director of the National Museum, remembers working in the Bureau of Mines somewhere in Ermita. It was not until 1966 that it was given statutory duties as the National Museum by Republic Act 4846, which also specified that it was mandated to protect and preserve Philippine cultural property. One of the results of this law was the National Planetarium.

Because the National Museum was in an inappropriate building somewhere in Ermita, it had to hand over its historical collection to the National Historical Institute.

Meanwhile, an association of private citizens has banded together as Concerned Citizens for the National Museum. Organized as friends of the National Museum, they tried to help as best they could under the circumstances. Its first president was patron Purita Kalaw Ledesma. With the Senate building left empty by martial law, the National Museum was granted a floor. It was on borrowed time, not given the whole building. It wasn’t much and in time the Senate returned, followed by the Office of the Ombudsman, resulting in the relegation of the museum somewhere between the two offices, again under cramped circumstances of sharing of a building.

Meanwhile, Concerned Citizens for the National Museum, noting that at the end of the 20th century, the country’s National Museum was a neglected orphan unable to be an established and influential presence in national life due to its nomadic status , agitated for a home for him in the 1960s and 1970s and early 1980s. launched a signature campaign for a permanent seat of the National Museum. It took a few years, but it raised awareness of the fate of the National Museum. The transient, impermanent and constantly changing conditions to which the museum has had to adapt since 1887 have become public knowledge and have prompted a demand for correction.

Now the National Museum has queues to see its wonders. It has its own buildings and is a respected and accessible institution. Everyone should know the role of FVR in its current dignified and vibrant status.

When the Concerned Citizens For The National Museum, now renamed Museum Foundation of the Philippines, invited FVR to a fundraising gala sometime after the first building was completed, he promptly came, stood up to deliver a speech. holding a sheaf of papers which he suddenly threw to the floor saying he preferred ad lib. It was one of FVR’s old tricks, letting the papers of an alleged speech fly away as he spoke spontaneously about the importance of the National Museum. Sometimes he clowned around to make a point and people loved that. In truth, this career soldier had a liberal, astute spirit who saw what was needed and did something about it in a field that the public wouldn’t relate to the military. His example of support for the National Museum was followed by his successors – Estrada, Macapagal-Arroyo and Aquino. But he was the pioneer who brought it to its happy turn.

There should be a plaque in the National Museum telling the world who its hero is. Thank you, FVR, we salute you as President who has given our National Museum its admirable home.