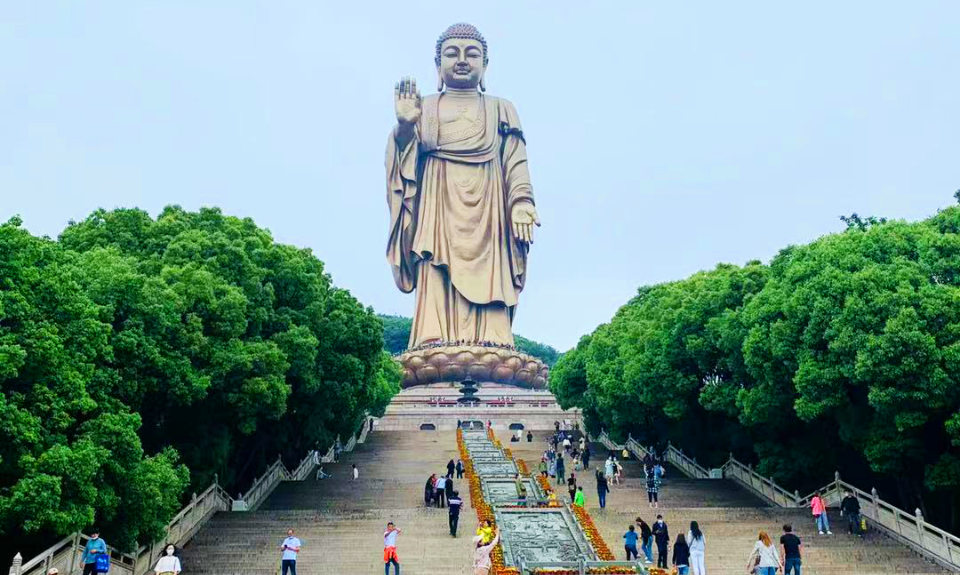 
“Life can only be understood backwards and must be lived forward.” [Soren Kierkegaard].

I recently Googled my old English teacher. She died in a traffic accident 20 years ago. A Dutch driver got lost on the way to the car she was in.

In a shimmer, I was back in my 13 year old body, trying to make sense of the end of another life on the asphalt. It made me think of roads; Of travel. Roads are a dangerous hot spot. The roads are difficult to face, difficult to digest, difficult to resist. We want to protect ourselves; to eliminate the risk of pain, injury or hopelessness.

Yet recently, I touched the feet of the Buddha. And that made all the difference.

Jiangsu Province is home to the ancient capital of China, Nanjing. Surrounded by the splendor of Purple Mountain, Qixia Mountain and Fang Mountain, and crossed by the meanders of the Yangtze River, Nanjing has no shortage of beauty spots to bewitch and delight.

However, as the temperature rises to melting and the humidity reaches “hairdryer in a Turkish bath” levels here in the summer, there is nothing wrong with having a Plan B, C, D in it. the sleeve. And an “LMNOP”, just in case it rains too.

With that in mind, last month I had the pleasure of visiting the Taihu (Tai Lake) area near Wuxi with a group of my favorite people; my students.

The lake region is as picturesque as any lake could be; water birds flutter on the glassy surface, flower beds burst into an explosion of color on one side, bamboo groves guard the entrances to one of China’s largest freshwater lakes on the other, where tiny two-person barges nestle.

During the day, these ships fish the lake and supply local restaurants with mouthwatering fish, although pollution concerns around Taihu mean that eating this fish is an act of risk-taking and jaded abandonment of laissez-faire.

Nonetheless, the lapis lazuli mirror of the lake under the early summer sky reminded me of the joy at the first glimpse of Purple Mountain, in the valley that I have grown to think of as my home.

The journey expands the mind, perhaps, by reminding us of the beauty that has shaped us.

Taihu is home to a haven of water towns, scenic areas and Lingshan Da Fo.

Lingshan Temple rests in the rolling hills of Yixing. Here the Big Buddha gazes benevolently at the pilgrims from a height of 88 meters, perched on a lotus flower, making it one of the tallest in the world. The first sight is breathtaking.

With downcast eyes and a smile that has heard worse stories and still loves you, the Buddha holds one hand in the air, palm open towards the approaching pilgrim.

Weighing 700 metric tons of bronze, this feat of art and engineering is breathtaking at first glance.

Da Fo is magnificently huge. It was Buddha’s birthday the day we visited, but a strange silence reigned, not silent, however, given the large number of people. Incense and candle wax cover the steps of Da Fo. We were amazed.

As they climbed the steps, the other pilgrims knelt and bowed before the Illuminated One. We were walking slowly. Quietly.

The Buddha was born a prince between 5,000 and 4,000 BCE in India. His opulent childhood, pampered and consented, in no way prepared him for the sufferings and misery he discovered outside his father’s palace. Upon meeting a sick man, an old man and a dying man, the Buddha, then known as Prince Siddhartha Gautama, gave up his princely traps in the pursuit of happiness.

What he finally discovered was that only by embracing suffering can we hope to be free. Wishing for what is out of reach is a recipe for discontent, according to Buddha’s findings.

Unfortunately, the main ingredient in human ingenuity and innovation is imagination; that energy, that desire and that passion that feeds the madness of dreams and impossible endeavors.

Hope. Optimism. Faith. We have to give up all of these things if we are to be content in this world.

Suffering is part of the lot, says the Buddha. His life story is a metaphor for this life journey and the challenges we face on its often bumpy road. Illness, aging and death.

Following the winding path to the base of Da Fo, before getting on the elevator to touch Da Fo’s feet; emerging in the midday light. Da Fo looked even taller, even grander. I felt even smaller.

I touched the smooth bronze surface of the statue, immersed in deep thought. One child said, “Why touch his toenail? Touch his foot!

Sharing the laughter under Da Fo has been a moment of joy, one that we must grasp and appreciate in his passage. So says Da Fo. This is the secret of contentment.

We went down. We broke bread together. We laughed more, a lot more.

Outside the temple, water villages are dotted along the Taihu Delta. Huishan Old Town is one of the most delicious corners I’ve found since COVID burst onto the scene like a drunken uncle.

Rickety sidewalks line the Beijing-Hangzhou Canal which runs through the restored old town at the foot of Huishan Mountain. Tea rooms with sticks of sweet hawthorn and glazed cherry tomatoes dot the driveway where willows plunge into the cool waterway. There is buzz, but it is not busy. Arched bridges, whitewashed walls and granite bricks adorned with red lanterns transport the visitor back in time. No cars or scooters are allowed in the settings. It is possible to walk. On the bridges and under the arcades, in the alleys and through the small squares of the city.

It is good to walk slowly. A door reveals a bonsai garden. Another houses a portrait of Samuel Beckett, deep in the belly of a labyrinth of a tiny network of tea rooms.

Huishan’s old town hides beauty balls, beckoning time to slow down; invite the pedestrian out of necessity, to let go of the accelerator for a moment, to take advantage of the moment.

Nearby, Yixing is home to the Museum of Clay Teapots dating from the 1400s. Through an arduous process of dominating chunks of rock, the Yinxing Shi Fu shape the earth as they please, creating some of the most exquisite teapots and, he must be said, the most expensive in the world. In 2010, a Yixing teapot was auctioned for over US $ 1.9 million. I urged the children to be careful.

In the museum workshop, we worked with a piece of Yixing clay, which is no longer sanctioned for mining the earth. The remaining supply is all there is to it. Under the watchful eye of the master, we make our magmum opus.

My musty-looking pinch jar takes on a new shine.

Jiangsu holds treasures that we don’t know about.

The calendar days are advancing. “I should be” or “I would be”, simpleton in the now sleepy part of the brain, the urge to travel.

Some countries are opening up. I look at my potty, and I look at pictures of low-key family gatherings. I twist and thank at the same time.

I’m like the falling cat with a slice of buttered toast stuck on its back.

But Da Fo’s gaze is still on me. Carpe que diem absolute, he says. Follow the road. Be where you are and love it. The contentment of life is found in the moment, the fleeting flashes of happiness. The Buddha says to embrace suffering, but to make the most of every moment of joy. There is no helmet that protects life. The capacity to experience exists only in the here and now.

Saskatchewan’s Endangered Grain Elevators and Efforts to Preserve Them