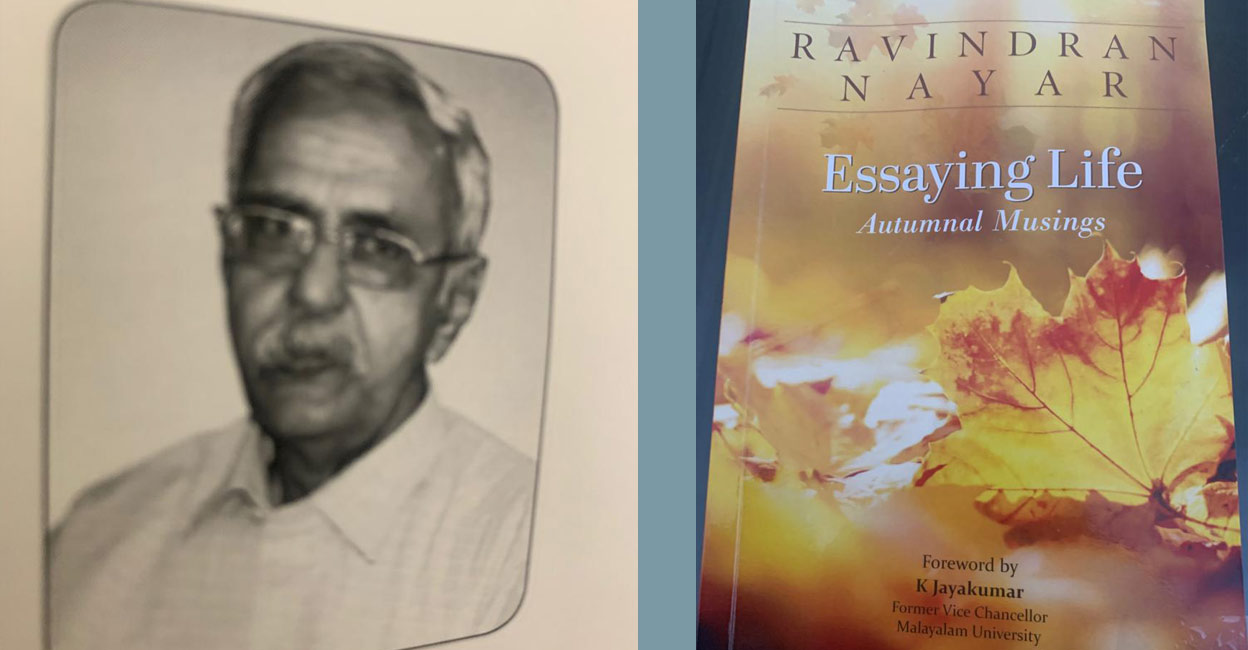 Of all the four seasons that nature has given us, autumn is the most magnificent manifestation of her bounty. Spring is youth, the time of birth and cheerfulness and cheerful surrender, summer is the time of challenges, and winter is the time of frozen hibernation. Autumn has it all, a myriad of colors, temperate weather, delicious fruit symbolizing maturity and fruitfulness, tempered by a sense of foreboding about the impending dark winter.

The essays of scholar, teacher, journalist, thinker and writer Ravindran Nayar, in his “Essaying Life” collection, are rooted in the autumn of his life, even though some of them were written years earlier. The cover design of the book itself tastefully proclaims this. The impact of the pandemic on all human beings, which the writer brings poignancy to the final chapters. The themes of the essays are divergent, beginning with startling observations about God and ending with his toothlessness, which inhibits even the hearty laughter about human failures he sees around him.

In between, the essays deal with philosophy, art, literature, science, language, customs and mores, politics and society. It has very little autobiographical content, although the writer reveals his wisdom, scholarship, and even his likes and dislikes of cabbages and kings. The style is fluid, soft and with a touch of humor and irony. As the author of the foreword, K. Jayakumar, a gifted man of letters himself, calls the book, “Wisdom of a life lived with intensity and integrity.”

The best chapters in the book are those on literature, especially those on his guru and mentor, K. Ayyappa Paniker. His studies of Paniker are deep and insightful, enriched by his many conversations with the poet and the courage he had to translate Paniker into English. It must have been difficult for him to translate a poet, who is adept in English and Malayalam, but it was Paniker himself who pushed him to do it and approved of his work. Paniker did not help with the translation because he thought the poet should not come between the poems and the translator. The three essays on Paniker, written on different occasions, the most recent in “Ayyappa Paniker Forever”, published by the Ayyappa Paniker Foundation on the occasion of the poet’s 90th birthday, are among the best tributes paid to the architect of modernism in Malayalam poetry.

As my contemporary in University College, Nayar shares my view that we were unable to assimilate the lessons of Ayyappa Paniker when we were his students. We knew he was brilliant, but we couldn’t grasp his insightful observations and subtle humor. I discovered it much later in my conversations with him in different parts of the world. As Nayar observes, “Many of us were, in fact, seeing a poet in the flesh for the first time and the poet of Dr. Paniker had something special, the aura of a pioneer.”

Paniker didn’t crack jokes to enliven the class like others did, but in the course of his class there was a word or phrase or phrase, spoken with deadpan seriousness, that brought out, very subtly, the situational irony. We missed most of his wry humor back then, but we laugh out loud now when we call them back in the quiet. Humor was omnipresent in his writings, even when he dealt with serious subjects.

Nayar mentions ‘Gopika Dandakam’, ‘Janma Parinamam’, ‘Gotrayanam’ and ‘Hey Gagarin’ as his personal favourites. I agree, but nothing was more popular than ‘Moshtavu’ and ‘Pookaathirikkan Enikkavathille’. Nayar quotes Paniker’s last word on poetry:
“Good poetry is a conversation,
Sometimes only one person speaks,
Sometimes both
This is the enduring characteristic of poetry.”

The chapter “The Ayyappa Paniker who eludes us” sums up Nayar’s assessment of the poet when he asserts that most of us have not fully understood the real Ayyappa Paniker, the man behind his prodigious intellectual creativity. . All descriptions of him, says Nayar, sound like the story of six blind men describing an elephant. Each of their descriptions was correct, but no one captured the full picture.

The chapters on God reflect a cynicism he acquired after many years of absolute faith instilled in him by his mother and the society around him. Many people become intensely devotional as they get older because they think that would be the best way to reserve a place in heaven. Some depend on their wives to pray and do pujas so they can hold on to their sarees on their upward journey. But Nayar became a Thomas of doubt as he grew older and began to question the many contradictions in the myths and legends of countless Hindu gods he heard from childhood. For example, Krishna was his hero as a mischievous and naughty child and as a young adult, playing the flute to the admiring and loving Gopis around him. Krishna was his hero when he poured out his wisdom to Arjuna through Gita, but he was disappointed in his stealth and outright dishonesty in later years, especially in Kurukshetra. “Why, my Krishna, why all this? In the twilight years of my life, I find it hard to understand,” Nayar asks in a heartbreaking voice.

Nayar has similar questions as to why many Greek and Roman gods are only seen in sculptures and operas, while in India the gods are there in all their glory and believers don’t want to treat the stories to their subject simply as myths. “Is it because of the power of the Gods, the ingenuity of the priestly class or the gullibility of the people? No idea”, He can’t quite understand the concept of the sky and its precise location and wonders if souls have their own cafeterias there to meet. each other. He recounts with horror the practice of abandoning old people in holy places to be cared for by the Gods.

Nayar finds the legal hullabaloo surrounding the Sree Padmanabha Swamy Temple in Thiruvananthapuram and its enormous wealth strange and wonders what will happen to the unopened chests which are considered unsafe to open. Heedless of all commotion, this Mahakshetra stands in all glory and quiet majesty, his presiding divinity continuing his perpetual and blissful yoganidra, he says. He quotes, with his tongue firmly in his cheek, a devotee saying, “Whatever has happened in the past or is happening now or will happen in the future can only be according to the will of the Lord.”

Nayar included in the collection his review of my book on Shashi Tharoor’s campaign, published in 2011. He cites my prediction in the book that we hadn’t heard the last of him despite the twists and turns of his political career over the of the last ten years. year. The book also has a chapter on Tharoor’s habit of displaying big words and challenges his shameless claim that he practically invented the word “prepone”. Apparently, according to the Oxford Dictionary, the word has been in vogue since the 16th century! He felt that Tharoor was deliberately using explosive words to make a good impression and hoped he would see the futility of using grandiose terms and come up with simpler, more friendly words.

Many other chapters in the book reveal the author’s broad interests and pointed observations about them. Given his background and profession as a journalist, he commented extensively on the developments in Kerala. It extols the virtues of Kerala, but also condemns evils like murder, alcohol and drug addiction in chapters like “Fine Art of Killing”, “Oh my God, give us our daily pint”, ” The Evil Men Do’ and ‘How to Survive the Great Indian Channel Debate’, mostly sad and funny at the same time.

The final sections of the book are autobiographical, with warm thoughts of his family and friends (I am one of them) and the geriatric blues of a 70s man. He is increasingly preoccupied with thoughts of death, but he hopes to go with grace and so recites a Shiva Sloka every night, wondering if the prayer will help him or not. But his readers will certainly thank him for his legacy so well described in his book in his inimitable style, with honesty, transparency and will wish him many more years of his literary quest.

Anything can have DEIA if agencies watch hard enough