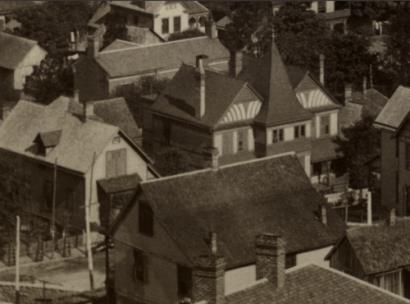 Cameron Hill was a magical place in its heyday; Urban renewal has erased all vestiges

Cameron Hill of Chattanooga, in its heyday, was a magical place.

A smaller image of Lookout Mountain just to the south, it has risen dramatically just above downtown Chattanooga.

The earliest houses in the town were either on the lower slopes of Cameron Hill or on the hill directly opposite Market Street.

Talk about convenience, you were only steps away from bustling city streets – jobs, shopping and government headquarters – between the two hills.

Boynton Park, at the steep northern summit, offered the most spectacular views of the river, mountains, and sky in all directions.

Several pre-war houses have long stood on Cameron Hill, and they were occupied by the generals who came to town during the Civil War. The Rathburn-Nottingham Columned House has long been a center of gracious hospitality. The Hooper House was one of the oldest residences in the city. The cabins in which Thomas Crutchfield Sr. resided when the Crutchfield House Hotel was built have long stood on West Eighth Street.

From the 1870s, such an assortment of architectural styles of all types began to sprout on Cameron Hill. It was a truism that the higher you climbed the hill, the more beautiful the houses.

But there were also stately ones on the lower slopes – the brick-built Whiteside mansion that dated to just after the time of the Ross landings, the home of world-renowned publisher Adolph Ochs on West Fifth Street, and dozens others of every conceivable style built by the city’s successful doctors and contractors. Scattered between the two were smaller but substantial houses occupied by factory workers, railroad engineers and accountants.

The creme de la creme was up there on the east terrace. DP Montague’s Italianate mansion was the only house in Chattanooga with its own pipe organ, and the grounds were landscaped by the firm of Frederick Law Olmsted. Captain Hiram Chamberlain had the grandest view from the southern end of the terrace of his vast stone mansion. H. Clay Evans, who nearly served as vice president and governor of Tennessee, entertained the presidents at his charming home in the middle of East Terrace.

With many mansions divided into apartments and many properties unmaintained, there was a plan in the 1950s to demolish them all and cut off the top of Cameron Hill at Boynton Park. Despite the protests of many, it was followed.

Today, few photographs of the original Cameron Hill have survived. Fortunately, in recent months Tony St. Charles graciously shared photos taken by his father, Pat St. Charles, Jr., who was hired by the Chattanooga Housing Authority to do appraisals for the West Side redevelopment project. This astonishing collection of some 375 Cameron Hill houses inspired a new examination of Cameron Hill and a search to find out who the charming characters who lived there were.

Chattanoogan.com is starting a series of articles today telling you about what we’ve uncovered at the ancient Magic Hill of Cameron.