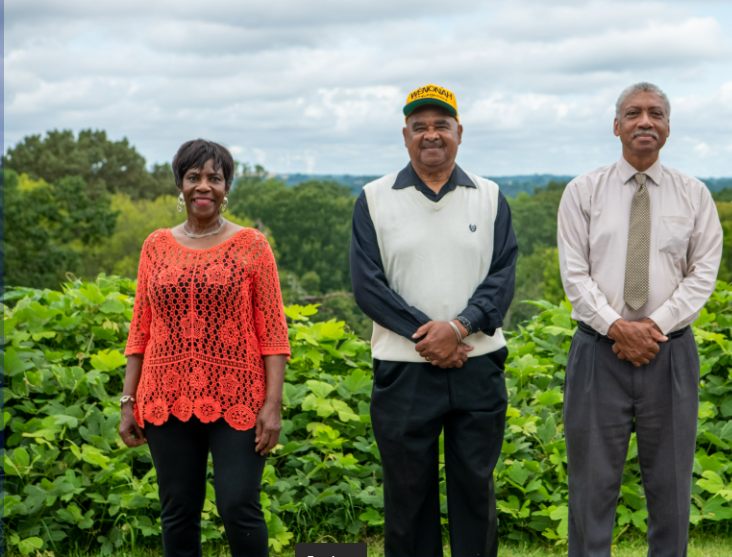 By Ryan Michaels
The Birmingham Times

Evanne Gibson, president of the West End community of Birmingham, remembers when her brother, Ervin Batain, made his way behind her home in the community of Ishkooda. Batain, who had kidney problems, had just come off dialysis after receiving a kidney transplant from an 11-year-old girl.

â€œAfter dialysis he changed a bit, so he used to go outside in his garden and just meditate,â€ Gibson said. â€œHe started to make his own way up on the mountain to clear his head and get closer to nature. … I think maybe he was thinking of this little girl with asthma, [from whom he received the kidney]. “

Currently, the RMP consists of 15 miles of trails, along which there are picnic areas, gazebos, treehouses, ziplines, a six-acre dog park, and several ancient mines to observe.

Jefferson County Commissioner Sheila Tyson remembers Batain and Gibson taking her up the mountain in the 1990s.

â€œIt was just beautiful. You could hear the birds and all that there, â€Tyson recalls. “[Batain] dreamed of creating a mountain trail that people could walk. I could see it because we actually had to hike and rock climb to see. His vision was incredible.

Batain, who was born to the son of a miner in the Grasselli Heights neighborhood, became the first person to use the area now known as RMP. In 1999, he cleared a path from the backyard of his house to the abandoned No. 11 mine, one of 15 mines operating on the mountain.

During his trips to the mine, where he often took his family, friends and other locals, Batain collected many artifacts. He also started 3D at No. 11 Mining Camp and Nature Trail, an official non-profit museum named in honor of his three sons: Demetrius, Deon and Devon.

Like his brother, Gibson, who sits on the RMP board of directors, understands the importance of green space to the people who live near Red Mountain, many of whom struggle with health issues, such as diabetes and hypertension.

Batain died in 2014 from kidney failure. Until then, however, he “got on the track and exercised,” Gibson said. “He started telling people about itâ€¦ as a way to exercise your mind and body.”

While the RMP was officially established in 2012, Batain, known by some as the â€œProphet of the Red Mountainâ€, was the first person to start using the park as a tool for the good of his community. Since then, many people have benefited from the benefits of the park, which commemorates its 10th anniversary next year.

Angela Grace, from the Lipscomb community, is one of them.

â€œFirst of all, I am a nature lover, a nature lover,â€ she recently told the park. “Number two: [My husband and I] do so for health reasons. It’s for our psyche.

Latasha Holt, a resident of the Riley-Travellick community, said she and her husband got lost in the park, but found the whole hike “relaxing.”

â€œWe got lost for about two hours, but it was nice,â€ she said. â€œWe found our exit and it was a great training that day. It is something different. It offers you a nice place to relax, a place where you can feel safe to exercise or just walk and socialize with your children,â€¦ a place where you can ride a bike without worrying about cars. that pass in front of you. It gives you a feeling of security and relaxation.

The large natural space allowed people in West Birmingham, an area with little natural refuge, to get used to the beauty of nature, said Tyson, one of the park’s earliest and most ardent advocates.

â€œI think it’s about making our minds healthier,â€ she said. â€œIf you see green space, you think green space. If you see roads, factories, and gas tanks, [on the other hand], it is difficult for you to have this type of visionâ€¦ unless it interests you specifically.

â€œThe west side of Birmingham has such a negative image because the area has a lot of social housing. . ., and [some] roads that are not in good condition. Even though there are beautiful houses, there are also abandoned houses, so a lot of people don’t see the positive. [RMP], however, is our gem, â€Tyson said.

When Gibson first climbed the trail with Batain, she focused on the fresh air.

â€œI started going up there with him and noticed that the higher you go, the cooler the air,â€ Gibson recalls. “You can smell the fresh air [on the mountain], it was therefore a means of well-being. â€¦ The people of the community did not know the gold mine they had in their garden.

Tyson remembers Batain and Gibson taking her up the mountain in the 1990s.

â€œIt was just beautiful. You could hear the birds and all that there, â€Tyson said. “[Batain] dreamed of creating a mountain trail that people could walk. I could see it because we actually had to hike and rock climb to see. His vision was incredible.

Beyond the natural health aspect, RMP le parc is a tangible educational tool.

â€œThere is so much rich history out there,â€ Tyson said. “When I say a rich story, I mean it’s a story we can touch.”

The idea of â€‹â€‹using the RMP park as a huge educational tool is something Lawson State Community College history instructor Gregory Wilson said he could visualize.

â€œI saw it as a multidisciplinary and multidimensional opportunity, not only in terms of my particular discipline, but even with the diversity when it comes to biology,â€ said Wilson, who has a master’s degree in education and is involved in various projects around Birmingham, including the Arlington Antebellum House and Gardens, a former plantation house and six acres of landscaped gardens near the city center that feature pre-Greek Revival-style architecture war.

“[At RMP], I saw geology, I saw archeology, I saw the history of Native Americans, â€added Wilson, who used the space to teach his own students by showing them around the space. and ask an archaeologist questions.

â€œEducators tend not to see [the potential] because it’sâ€¦ a rough diamond, â€he added. â€œThey say, ‘If you take us to a nice air-conditioned building, that’s okay. But there is a wealth of knowledge, history and information on the outside.

In the 1980s historian Horace Huntley, originally from Birmingham’s Riley-Travellick neighborhood, was researching the organization of work in the Magic City and developed some ideas on how to use the abandoned mines on the mountain. as a public space.

“What I was imagining was going on trips into the mine, doing something similar to what had been done in Sloss, only those would be underground, rather than on the surface. [excursions] in Sloss, â€said Huntley, referring to Birmingham’s Sloss Furnaces National Historic Landmark, which operated as an iron production blast furnace from 1882 to 1971 and now serves as a museum and event venue.

Although Huntley’s ideas were not used in the initial planning for the RMP, the historian said he appreciates what has been done with the field in recent years.

â€œThe current version of what Red Mountain is was not my idea. I just had an idea leading up to that, â€said Huntley, PhD. in African American and Labor History, was Director of Oral History work for the Birmingham Civil Rights Institute and is a former professor at the University of Alabama at Birmingham who helped establish the Afro-American Studies program. American school.

“They are doing a very good job slowly developing this area. [with] hiking trails, parks and stuff across Red Mountain, â€added Huntley.

RMP officials and board have attempted to include more surrounding communities. In 2019, a south entrance was opened on Venice Road, providing greater accessibility for residents of neighborhoods like Grasselli Heights, Tarpley City and West Goldwire. Establishing this entrance has made access to the park much easier for residents on this side of the mountain, Gibson said, â€œAnytime you have a place that you think you can go to without any resistance, you feel included. “

In addition to Gibson, RMP has 14 other board members, including Birmingham District 6 Councilor Crystal Smitherman and Tarpley City Neighborhood Association President Rosalind Young.

A treasure for all

RMP Executive Director Thomas Carl â€œTCâ€ McLemore said more people from Wenonah and surrounding communities have come to the park since the opening of the second entrance to Venice Road; the first entrance is at 2011 Frankfurt Drive, on the park side closest to Homewood.

â€œIt is now an integral part of the daily life of the people of Wenonah,â€ he said. “The [Birmingham Police Department] the officers who work here at the park, they have the regulars they see every morning, people who come up from the corner and come into the park, take their morning walk, come back down and spend their day.

The south entrance also opened just months before the start of the COVID-19 pandemic, leading many more to visit the park using the new entrance.

â€œWe have always walked in Red Mountain, but especially during [the pandemic]Said Grace of Lipscomb. â€œIt has become one of our favorite places to walk, relax and unwind. â€¦ It was one of the only places we could go during the height of the pandemic. “

McLemore said: â€œAlthough we didn’t realize it at the time, the timing for this entry to open was excellent. This entrance to Wenonah opened in August 2019. When the pandemic hit in early 2020, we saw so many people from all over Birmingham,â€¦ truly from all over the county and state, coming. [to RMP] in the first months of the pandemic.

Beyond the new entrance, McLemore said it has made it a priority to stay in touch with neighboring communities.

“[During my tenure as executive director], I’ve attended many community meetings,â€¦ just to make sure we have clear lines of communication with community leaders. It has been really beneficial, â€he said, adding that the RMP truly belongs to the people whose families lived in the area.

â€œIt’s weird to think that I’m even able to invite people from Wenonah here,â€ McLemore said. â€œIt’s been yours since before I thought of myself. “

Before the west entrance opened, said Young, president of the Tarpley City Neighborhood Association, people “felt like [RMP] was not part of the community â€, but this area has always been important to these residents.

â€œIt means a lot to Tarpley City and the surrounding area as it goes back in our history,â€ Young said. â€œMines have been part of our history for years.

community mourns the loss of a Richmond couple | New

‘Opening Salute’ – ‘EXTRACTION: Art on the Edge of the Abyss’ opens at Holter Friday | Local