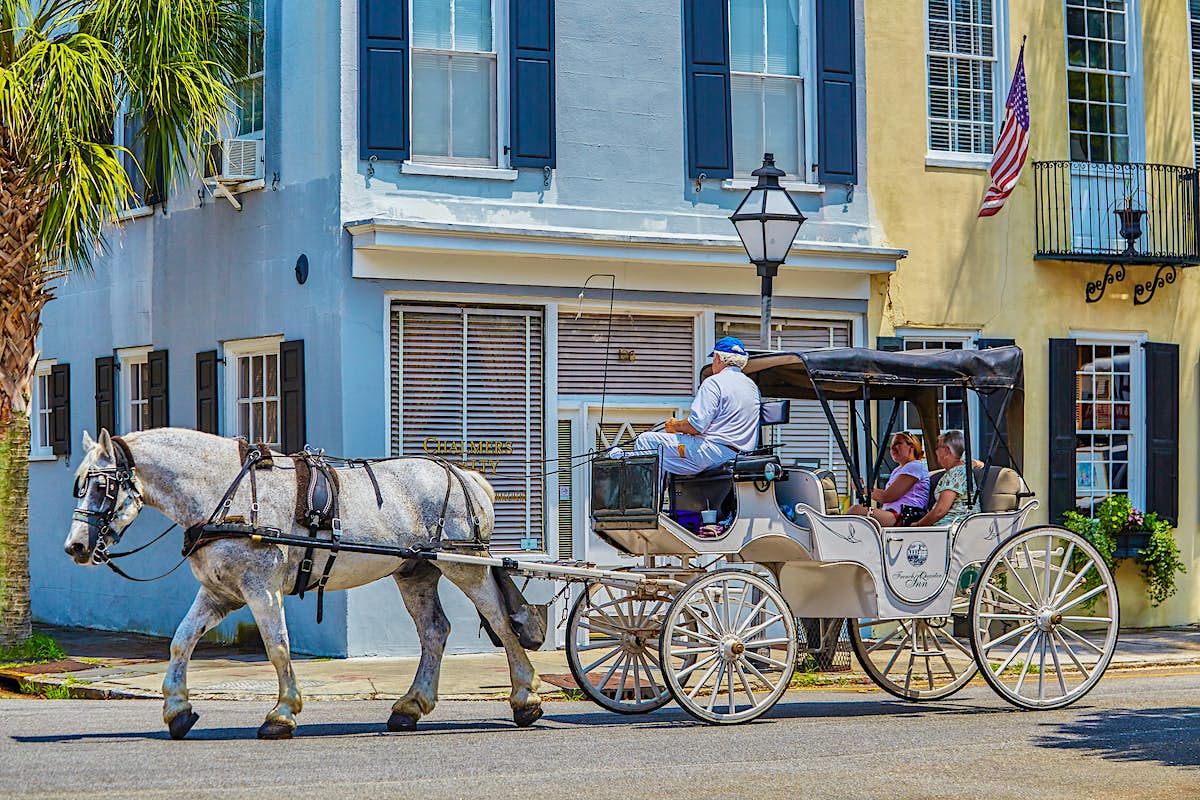 Rooftop bars, innovative breweries and small batch distilleries continue to open as plantations and historic homes delve deep into Charleston’s diverse and complicated history. And foodies take note: The debates over the best barbecue in town are just as passionate these days as the debates over shrimp and grits.

This list of the best things to do in Charleston offers a mix of the old and the new.

Stroll through the historic district

The historic city of Charleston looks like a large living museum and is easily explored on foot. Pre-war houses, grand churches, weathered cemeteries, and gleaming gardens – often hidden behind wrought-iron gates – surround the straight, narrow streets, which were laid out in the 1670s. Highlights include the Colorful Rainbow Row houses and Battery and White Point Gardens on the waterfront at the southern tip of the peninsula. Pick up a map at the Visitor Center.

With its seafood shacks, quirky mainstays and a dizzying array of â€œmust-seeâ€ chef-wondering restaurants, Charleston has enjoyed a hot culinary streak for a decade. Many menus are built around Lowcountry fare and seafood, but creative interpretations of old favorites keep the dining scene fresh. Beyond shrimp and grits, the best regional dishes include oysters, chili cheese, fried green tomatoes, crab soup, and a Lowcountry boil (shrimp, corn, potatoes, sausage and seasoning).

Get more travel inspiration, tips and exclusive offers straight to your inbox with our weekly bulletin.

The slaves brought from West Africa to the Lowcountry retained many of their national traditions after slavery ended. The resulting Gullah culture (Geechee in Georgia) has its own language and traditions, including incredible storytelling, art, and music. Learn their history at McLeod Plantation on James Island, where tours describe the daily life of slaves on a cotton plantation and trace the emergence of the Gullah culture. Their culture is celebrated each year at the end of May during the Gullah Festival in nearby Beaufort. Gullah Tours tours historic sites in and around Charleston.

Sweet tea is a typical Southern drink, and according to state tradition, the popular drink originated in South Carolina. The Firefly Distillery team embraces this heritage with their Sweet Tea Vodka, which is made with tea from the Charleston Tea Garden. High Wire Distilling uses ingredients and ancient grains from all over the Lowcountry and South Carolina for its popular spirits. Tastings are available at both distilleries. Tours are offered from Thursday to Saturday. High Wire Art.

The Historic Charleston Foundation protects the city’s historic buildings and advocates for the preservation of gardens, parks and neighborhoods. The foundation manages two historic buildings: the Aiken-Rhett House and the Nathaniel Russell House. Tours of the Old, a preserved but unrestored townhouse, share details about the former owners as well as the slaves who worked there. A free-standing spiral staircase anchors the Nathaniel Russell House, a meticulously restored 1808 Federal-style home.

The bombardment of Union-held Fort Sumter by Confederate forces in 1861 sparked civil war. The fort, which occupies a small pentagon-shaped island in Charleston Harbor, receives a constant flow of visitors, especially in the summer. But even with the crowds, it’s easy to get immersed in the chaotic confusion of this historic day thanks to the remote setting – a ferry ride is necessary – and an engaging tidy conversation that highlights the historic clash.

Burn last night’s shrimp and grits with a brisk walk over the graceful Arthur J Ravenel Bridge, which connects the town of Mount Pleasant and historic Charleston. The 2.5-mile pedestrian path over the cable-stayed bridge rises approximately 200 feet above the Cooper River and offers great views of both communities. There is a parking lot with access to the footpath at Mount Pleasant. The view from the bay is particularly pleasant at sunset.

Visit the only tea garden in the United States

Attempts at commercially cultivating tea in the United States began in the 1820s in southeastern South Carolina, where sandy soil, subtropical climate, and frequent rainfall were well suited to tea plants. In the 1960s, wild tea trees from one of these early plantations were successfully harvested and replanted on Wadmalaw Island, 30 miles southwest of Charleston. Today, Charleston Tea Garden offers tours of its tea factory (free) and cart tours of its acres of rustic tea plants.

Get out on the water

Bordered by coves, marshes, rivers and the Atlantic Ocean, the Lowcountry is an ideal location for canoe trips and boat trips. Wildlife and beautiful coastal views abound. Keep it simple with a Charleston water taxi ride between Charleston and Mount Pleasant, or look for dolphins on the boat ride to Fort Sumter. Adventure Harbor Tours runs sunset cruises and trips to the uninhabited Morris Island. Many outfitters offer paddling trips to the Shem Creek and Lowcountry creeks and marshes.

Stroll through the gardens of Middleton Place

Designed in 1741, the elegant Middleton Place Gardens are America’s oldest landscaped gardens. Today, they are also home to over 100,000 azaleas. One of three historic plantations along the Ashley River northwest of downtown, Middleton Place owes its pristine beauty to the labor of slaves who spent years developing and tending the land. Their stories are shared on site. Dishes from the Netherlands are on the menu at the popular restaurant here.

A free cart passes through the Charleston Beer District in downtown Charleston on Saturdays, stopping at ten breweries between 1 p.m. and 9 p.m. You can visit them going up and down. Revelry Brewery has a fire pit on its rooftop while Edmund’s Oast offers 20 home brew beers on tap. Check the Charleston Brewery District Facebook page for the current cart schedule.

For a break from the historic district, board a water taxi at Waterfront Park and cross the Cooper River to Patriots Point in Mount Pleasant. At the Naval and Maritime Museum, you can visit the USS Yorktown, a huge disused aircraft carrier used during World War II. You will need your car to visit Boone Hall Plantation and its impressive Avenue of Oaks, planted in 1743. The most fascinating buildings here are the original slave huts. Explore the charming old village, then head to charming Shem Creek for a waterfront dinner. Look for dolphins and party boats.

If your kids are digging spooky attractions, it’s hard to get much spookier than the Old Exchange & Provost Dungeon in the Historic District. The British held the American Patriots in the cramped space here during the War of Independence. The 385,000-gallon ocean tank and sea turtle rehab hospital draw kids in for a closer look at the South Carolina Aquarium. The Charleston Museum’s Kidstory Zone explores the city’s history with interactive exhibits. Huge skeletons of prehistoric creatures keep things real in the Natural History Gallery. For skateboarding, head to SK8 Charleston, a 32,000-foot concrete skatepark in North Charleston.

In the heart of the historic district, this impactful little museum occupies the site of a former open-air market that auctioned African Americans in the mid-1800s. Textual exhibits offer an unfailing look at the cruelties and horrors of the slave trade. Compelling oral histories of former slaves and a handful of spooky artifacts also make a strong impression.

Historical preparation at the Charleston Museum

History pervades you from all quarters in Charleston, which has played a central role in America’s past as a bustling port city and center of commerce. For a quick introduction to history, spend an hour or two at the Charleston Museum. Exhibits dedicated to the city’s early development and its role in revolutionary and civil wars provide useful context and context. The artifacts shed light on a variety of experiences, including those of Native Americans, enslaved African Americans, and influential politicians.

Sip cocktails at a rooftop bar

Chic rooftop bars with stunning views of the city center are plentiful. They are also easy to find – just take the elevator to the top of the hottest hotels. Sparkling views of the city lights and Charleston Harbor draw crowds to the iconic art-themed Rooftop Bar at Vendue. You’ll find an infinity pool, illuminated umbrellas, and other stunning city views at the Pavilion Bar atop the Market Pavilion Hotel.

King Street is the main shopping corridor in the Historic District. With many stores selling home furnishings and housewares, Upper King is considered the Design District while Middle King is the Fashion District, which is home to well-known clothing stores as well as upscale boutiques. . The southernmost stretch, Lower King, is dotted with antique stores. Pop into Blue Bicycle Books for new and used books, many of which focus on the South.