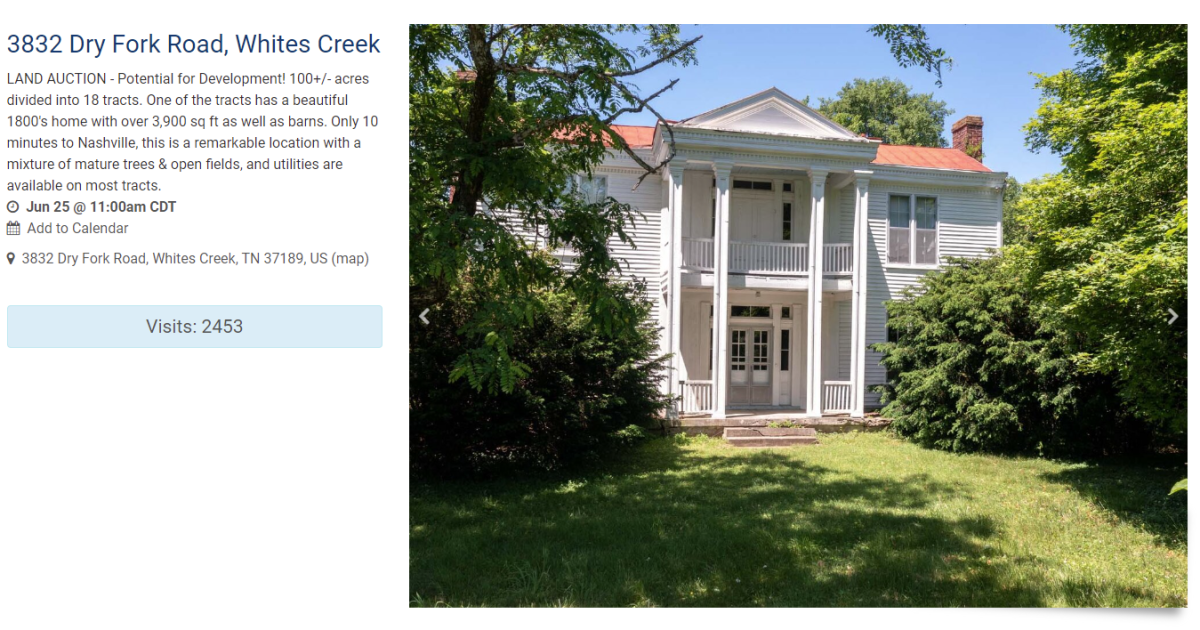 NASHVILLE, Tenn. (WTVF) – A pre-war home and more than a hundred acres in Whites Creek will be auctioned off.

The region is rich in history.

“And goes back to 1797, before Nashville was a city,” said Whites Creek Historical Society vice president Angela Williams.

The house is known as The Graves House and was built in the 1850s. However, the land was inhabited long before that, according to Williams. She is more than the vice-president of the Historical Society; it is also a neighbor of the property.

“We have archaeological evidence dating back to the Archaic Age of 5,000 years ago that there are communities of Native Americans who lived here that predate our current tribes,” Williams said.

Later, a herd of cows was grazing on the land.

“It’s called Little Switzerland because of all the dairy farms that were here,” Williams said.

At one point it was Country Maid Dairy, and Williams said they helped supply metropolitan schools with milk. Now, instead of cattle, auction signs are set up in the pasture.

After the death of the owners, the Thompson couple, their family decided to auction over a hundred acres.

“They’re trying to strike a sort of balance between selling to the highest bidder — a Chicago developer — and having 5-acre parcels that locals can have a mini-farm on,” Williams said.

The property has been divided into 18 rooms.

“I think we’re in an ideal situation of what all the development rules mean in Nashville, where we can maintain the rural character but also support the ever-increasing demand for housing in Davidson County,” Williams said.

She hopes the pre-war house will be saved. There are approximately 10 historic homes within 5 miles of the farm.

“Everyone understands that development is coming and they have to get there, but to preserve the history of Nashville and the character of Nashville – what makes us Nashville – we have to be careful how we approach those opportunities,” said Williams.