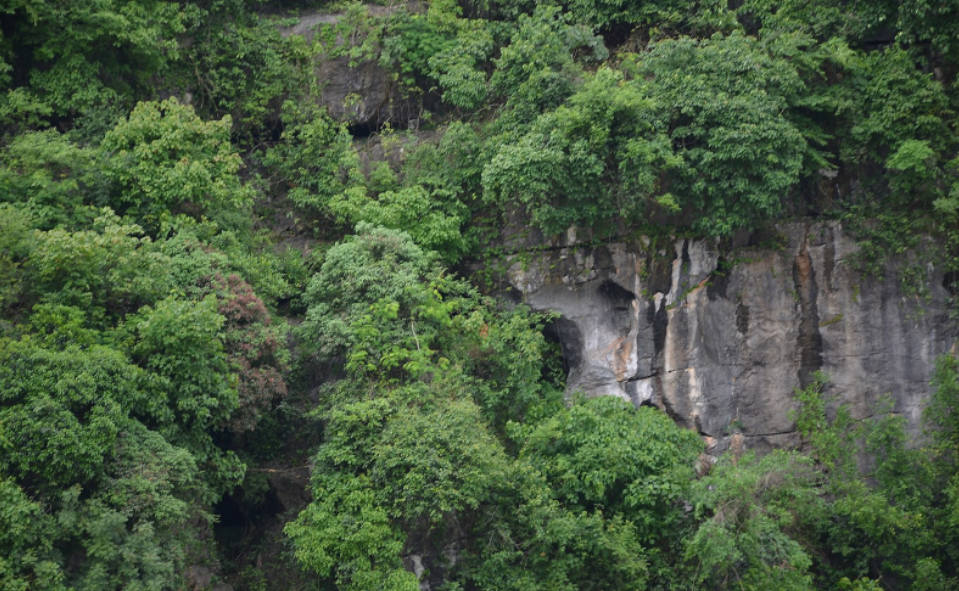 Ancient forest discovered at bottom of huge sinkhole in China

The mountains around Guilin are limestone and the constant movement of water through the rocks has led to an extensive network of sinkholes, caves and underground tunnels. Here are two, hidden behind the foliage. You can see one quite clearly while the second is lower in the middle of the brush. Credit – shankar s. from dubai, united arab emirates. CC SA 2.0.

At the bottom of a 630-foot sinkhole in China lies a green surprise: an ancient forest with trees extending nearly 130 feet (40 meters) out of the depths. Scientists believe it may contain undiscovered plant and animal species.

According to The Guardian.

Zhang Yuanhai, a senior engineer at the Geological Survey of China’s Institute of Karst Geology, told the official Xinhua News Agency that the site has three caves within its walls and a well-preserved primeval forest at the bottom.

Chen Lixin, who led the expedition team, said the team walked for hours to reach the base of the sinkhole. He said that in addition to the trees, there was dense undergrowth on the ground that reached up to his shoulders.

“I wouldn’t be surprised to know that there are species found in these caves that have never been reported or described by science until now,” he said.

The Lixin team completed their expedition on May 6 USA TODAY reported. The sinkhole has a total of three caves and has a total volume of 5 million cubic meters, this means that it would take 2,000 Olympic swimming pools to fill it.

Karst is a type of topography, ideal for geological wonders like the Leye County Chasm, created by the dissolution of groundwater in limestone rock beneath the surface, according to the United States Geological Survey.

Karst terrains are created from the dissolution of soluble rocks, mainly limestone and dolomite. Karst areas are characterized by distinctive landforms, such as springs, caves and sinkholes.

NPR.org reports that approximately 20% of the United States is made up of karst landscapes, including attractions such as Carlsbad Caverns in New Mexico and Mammoth Cave in Kentucky.

About 13% of China is covered by karst topography, according to NASAthe Guangxi region being a prime example of its beauty.

George Veni, Executive Director of the National Institute of Cave and Karst Research, says Live Science that karst landscapes can vary in size and shape, depending on the climate.

“In China you have this incredibly visually spectacular karst with huge sinkholes and giant cave entrances and so on,” Veni said. “In other parts of the world, you walk on karst and you really don’t notice anything. The sinkholes can be quite inconspicuous, only a meter or two in diameter. Entrances to caves can be very small, so you have to work your way through them.

Veni said the presence of old-growth forest isn’t necessarily surprising. “It is not uncommon for trees to grow at the entrances to caves. It’s just that [sinkhole] is particularly large and particularly deep, so it’s not the sort of thing most people would expect.

Peterborough Editorial: Summer and the outdoors are here to cure the pandemic blues