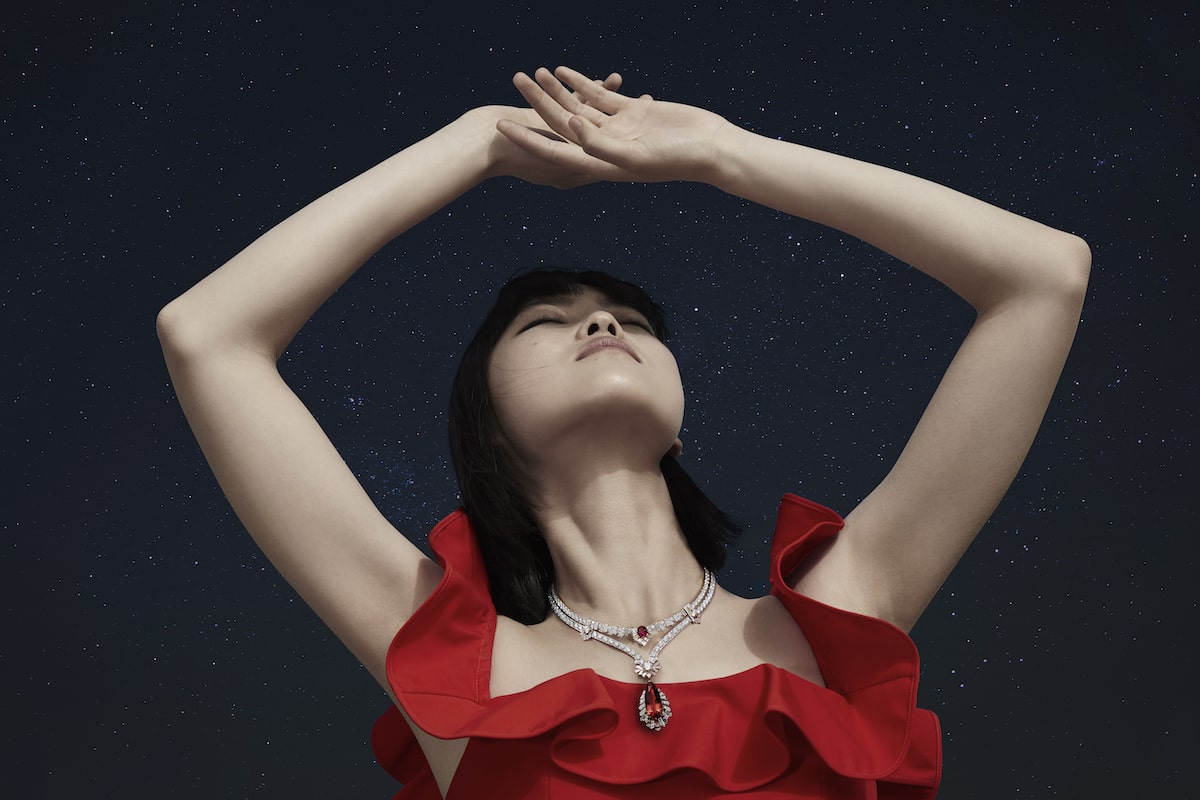 A look at the new Van Cleef & Arpels Under the Stars, Heavenly Dreams

Van Cleef & Arpels reveals the poetic character of the cosmos in its latest thematic collection – Under the Stars, Heavenly Dreams.

In French for â€œSous les Ã©toilesâ€, the fine jewelry collection renews one of the house’s historical sources of inspiration in a reimagining of the universe tinged with fantasy. The result: phenomenal interpretations synonymous with the iconic style and creativity of Van Cleef & Arpels.

The expression of the beauty of the sky runs through the history of the house, as evidenced by a panoply of pieces ranging from jewelry to precious objects. A dream and escape perfume, the sky and its stars have been recurring motifs in the world of the Parisian jeweler. In 1907, the sale of a star-shaped brooch of pearls and diamonds was recorded in one of the house’s earliest accounting books. Then, in the 2000s, she explored the theme of complicated watches, as shown by the Lady Arpels Midnight in Paris or her Extraordinary Dials collection. Over the years, the representations of the sky have been enriched with the signs of the zodiac, the sun and the moon, the latter adorning a minaudiÃ¨re in 1934 and a diamond brooch in 1962.

The cosmos also inspired the house to create modern and stylish shapes. Lines spring from Pylones jewelry in the late 1930s, while they converge and swirl in the 1950s MÃ©tÃ©ore collection, which combines strands of yellow gold with diamond centers. A decade after the Les Voyages Extraordinaires high jewelry collection, inspired by Jules Verne’s 1865 novel, De la Terre Ã  la Lune (From the Earth to the Moon), the house is revisiting these dynamic patterns and more with Sous les Ã‰toiles, Heavenly Dreams as he continues his odyssey through space and time.

Showcasing dynamic contours, shimmering silhouettes and chromatic explosions, the 150-piece Under the Stars, Heavenly Dreams collection is a contemplative dream landscape that brings out the wondrous beauty of the universe and natural gemstones. Nicolas Bos, Chairman and CEO of Van Cleef & Arpels, explains: â€œFor this new collection, we wanted to extend the adventure started with Jules Verne by exploring the literary and scientific tradition of which his work is inscribed. This led us to the classic author Lucian of Samosate Imagining a Journey into Space, Johannes Kepler and his inspirational text written in the early 17th century – Somnium: The Dream, or Posthumous Work on Lunar Astronomy.

When the stars align

The designers, gemologists and craftsmen of the house have nourished their imagination with numerous representations of the universe by astronomers,
writers and artists. These included centuries-old popular science works, various works of art, paintings, engravings as well as impressive cosmic landscapes revealed by recent astronomical images. â€œThe unexpected pandemic made us wonder: was it wise to create fine jewelry in such circumstances, and if so, how to present it? We finally understood that we wanted to share with everyone the enchantment we felt and the inspiration we had when imagining the collection: studying books on astronomy, watching [US space agency] Photos from NASA or discussing stars and galaxies with French astrophysicist Isabelle Grenier. This collection really makes us travel very far, allowing us to dream and to dare, a need today perhaps more than ever â€, adds Bos.

Sublime blend of art and science, the association of the poetic vision of the space of the house with that of astronomy is what makes the collection Under the Stars, Heavenly Dreams so extraordinary. Bos specifies: â€œOn the one hand, we have nourished our imagination with nature and the fantastic references specific to the house. On the other hand, we called on the iconography and astronomical expertise of the 19th century with L’Astronomie Populaire by Camille Flammarion, to the present day, with Isabelle and the colored photographs of the ESA (European Space Agency) and the NASA of space phenomena.

Professor of astrophysics at the University of Paris Denis Diderot, Grenier has helped the craftsmen of the house to understand various scientific dimensions to create pieces that perfectly blend art, poetry and science. â€œThanks to his knowledge, the space unfolds in an infinity of colors and shapes. â€œThe universe is playing with this palette,â€ Isabelle said, describing the nebulae, star flares and supernovas that we admired in recent photographs from ESA and NASA. We took our imaginations a step further with these elements and our designers decided not to focus on a common representation of the stars, but instead dove into space. This is how our designs were born, and this is how we chose specific spatial wonders to represent, â€says Bos.

At the heart of the collection is an incredible display of the multiple colors of space achieved through a palette of precious and ornamental stones, including sapphires, rubies, opals, lapis lazuli and chalcedony. Associated with the brilliance and liveliness of the compositions, the jewels evoke a feeling of dynamism and wonder associated with the infinite spectacle of the sky.

â€œFinding and selecting stones required careful and hard work on the part of our stone experts. They only chose those that meet the house’s strict criteria, which vary depending on the gem. For example, diamonds should feature the clearest, brightest, and purest material, while emeralds should display intense color and refined gardens – inclusions unique to this type of gemstone. For the DÃ©esse Aurore clip in the collection, we chose to use a pink star sapphire with a very fine asterism, which testifies to its quality and rarity, â€explains Bos.

Other remarkable pieces are the Cepheid service on which chalcedonies and tanzanites mingle; the Arche Solaire bracelet adorned with coral, as well as pink and mauve sapphires; and the Sentier d’Ã©toiles bracelet which presents a magnificent sapphire cabochon weighing more than 69 carats in the center of a multicolored spiral.

Bos highlights another remarkable creation from the collection, the High Jewelry Planetarium watch encircled in the center of a bracelet entirely set with precious stones: â€œThe Sun, Mercury, Venus and the Earth – accompanied by its satellite, the Moon – truly come to life on the dial, thanks to a module developed exclusively for the house. The production of this exceptional piece required 1,370 hours of work. It is a fine example of the highest horological expertise combined with jewelery prowess.

Finally, Bos reveals the piece for which he has a soft spot: â€œI think the Ciel de Minuit necklace is quite emblematic of the collection. The house wanted to achieve a poetic interpretation of the Milky Way and we did it with this creation. The unusual choice of lapis lazuli with visible bursts of pyrite must have echoed the distant stars with subtlety. The work done on the joints brings surprising flexibility and great comfort to the wearer as well.

This story first appeared in the October 2021 issue of Prestige Singapore.

Looking for a five star luxury romantic break? The Glenlo Abbey Hotel in Galway has it all