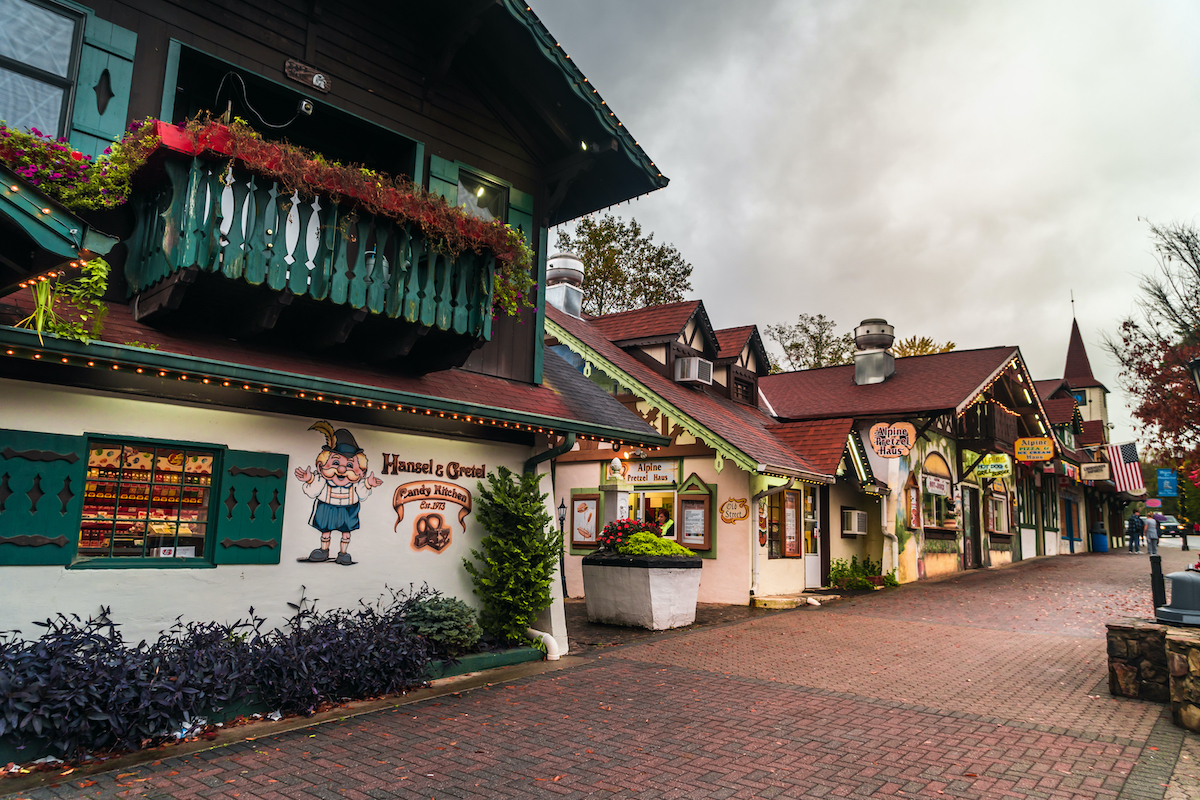 Georgia has some unique small towns. Where else can you find a hospital built to deliver cabbage babies? It’s rare to find a city famous for being the birthplace of a rabbit. Imagine an island owned by 100 of America’s richest men. While we’re on the subject of rich, guess where the lost Confederate gold is. Want to discover an alpine village or go underground in a gold mine? Maybe find Bigfoot. You can in Georgia if you know where to look.

I have visited most of these places on organized press trips, but all opinions are mine.

Eatonton has two assets: it is the home of Brer Rabbit and prehistoric rock effigies.

Love the Brer Rabbit statue in front of the museum. The museum is housed in a log cabin made of three old slave huts similar to those where Uncle Remus is said to have lived.

The shadow boxes depict characters from 12 of Harris’ best-known stories. The museum has murals. My favorite exhibits are stills from the film Southern song. Walt Disney donated it when the museum opened in 1963.

The rock monuments of Eatonton, The Rock Eagle and Rock Hawk Effigies, the only prehistoric remains of this type east of the Mississippi River, are made of milky quartz rocks shaped like birds. They are older than the Great Pyramid of Egypt, dating from around 3000 BC.

Rock Eagle is 120 feet in diameter, 102 feet long, and approximately 8 feet tall. Rock Hawk has a wingspan of 132 feet and 100 feet long. Both sites are accessible free of charge during the day.

The area around Rock Hawk is an outdoor classroom and park with trails, camping, wildlife viewing, canoeing or kayaking, a playground, and a beach. There are two towers to see the mounds.

The Native Americans living in the area when European settlers arrived did not know who had built the mounds. They were there when their ancestors came. The best theory is that the mounds were built as religious sites and associated with burials.

Looking to adopt a baby who doesn’t need a diaper change? Visit Babyland General Hospital, the birthplace of the Cabbage Patch Kids in Cleveland. On my first visit I was expecting a fancy doll store. Instead, the lobby resembled a hospital entrance with exhibits in glass cases. A closer look at the exhibits reveals that Cabbage Patch Kids, like Willie, whose adoption fee was $ 55 and is now worth $ 1,500. That’s the big difference here. You are not buying a doll; you “adopt”.

The main attraction is a large “cabbage patch” under a giant oak tree with little winged rabbits clustered in the branches. The cabbage patch is filled with baby faces in cabbage leaves. A “doctor” and a “nurse” sterilize their instruments. The doctor delivers a baby and hands it to the nurse who wraps it in a blanket. Then they take his temperature, weight and heart rate. Once it is determined that he is in good health, they invite you to adopt.

Of course, I did. My baby is Evelyn Victoria.

Ellijay claims one of the county’s most unusual attractions. Expedition: Bigfoot, a research center and museum dedicated to evidence of Bigfoot’s existence in Gilmer County. David Bakara opened the museum / laboratory in 2016.

There is a map detailing the sightings and differentiating between clearly visible and indistinct. The museum features one of the largest collections of Bigfoot artifacts in the world. There are items like Bigfoot footprints, hand prints, hair samples, and fecal samples. Bakara has headsets that broadcast recorded â€œconversationsâ€ on Bigfoot.

There is a re-enactment of the Ape Canyon Attack in Washington on July 16, 1924, creatures called “ape men” attacked a group of miners.

A â€œBRATâ€ (Bigfoot Research and Tech) vehicle is on display. He was using it when he saw two of the creatures in Alva, Florida. One section of the museum is David’s research lab. You can go through it and watch. Do not touch.

Dahlonega was the site of the United States’ first gold rush in 1828. Eventually most of the mines closed. Today, Dahlonega finds its fortune in tourism.

The Consolidated Gold Mine, the only visit to the Dahlonega Underground Gold Mine, is one of the few places where you can visit a gold mine. The tour took me deep underground. One of the most interesting features is the Glory Hole, where the main gold veins converge. While they were mining for gold, the open space formed a large skylight opening onto a view of the sky. On the rocky ground here you are 300 feet underground. The original mine had three levels, but no one has ventured into the lowest tunnel in over 100 years. The guide told us that the tunnel was approximately 1 mile long and 1000 feet deep.

The mine is visible because when gold prices fell in 1906, the owners stopped production and blasted the entrance, leaving the tools inside. Most of the original machines are still working. Our guides were former miners so they made an informed tour. There is an area above where you can search for gold.

There is a German alpine town in the mountains of North Georgia that has not always been a tourist destination. Helen was an unknown community in 1969. She started during the Georgia Gold Rush. Prospectors found gold at Dukes Creek. After the gold disappeared, the settlers turned to another resource, wood. The Byrd-Matthews Lumber Company and Gainesville and Northwestern Railroad came. They named the town after the daughter of one of the railway surveyors. In 1931, the wood had disappeared; the people moved away. Helen was becoming a ghost town.

One resident, an artist named John Kollock, had spent time in Germany. He came up with a unique solution. They had a beautiful mountain setting. Why not recreate a city with Bavarian flavors?

When you walk through downtown Helen, you feel like you are in an Alpine village. I love shopping in the chalet-style boutiques. The cobbled streets add to the flavor. There is a touch of Appalachian culture. Mountain crafts such as pottery rub shoulders with Bavarian glassblowers. The festivals here have a German touch. There is the Oktoberfest, from September to November, Fasching, a German Shrove Tuesday in February, and a Christmas market and a winter festival.

Jekyll Island was a rich man’s playground in the 1900s. Five generations of du Bignon owned the island until 1886, when Jean EugÃ¨ne du Bignon sold it to a group of millionaires. They called it the Jekyll Island Club. Its 100 members controlled about one-seventh of the country’s wealth. In November 1910, six men met at the club. JP Morgan is credited with organizing the secret meeting. They devised a plan that became the Federal Reserve System.

Today it is a state park. Most of the chalets are open to visitors.

Crane Cottage, built in the Neo-Renaissance style, has 20 bedrooms and 17 bathrooms. Crane’s plumbing company was the first to produce colorful plumbing fixtures.

Indian Mound, owned by William Rockefeller, is a 25-room, three-story shingled house with a stained glass window, dumbwaiter, cedar-lined safe, and hot and cold salt water in the master bath. .

Goodyear Cottage is the Jekyll Island Arts Association and is open to the public free of charge.

The piece de resistance is the Clubhouse with turrets taller than any other structure on the island.

There is a tram tour that takes you through many houses.

Washington is home to the Confederate Treasure Chest and many pre-war homes. In May 1885, as Confederation fell, Jefferson Davis fled to Washington with the southern treasury and gold from the Richmond banks. Confederate paper money was worth nothing, but gold was valued at over $ 500,000. Most historians agree that Federal soldiers only recovered about a third of the gold. Gold worth over $ 1 million in today’s market is lacking. Legends claim he is buried near Washington. The old iron and leather chest is in the Mary Willis Library.

The small town of Washington is a historical treasure, not to mention gold. There are more pre-war homes than any other city in Georgia of a similar size.

One of my favorites is the Washington Historical Museum. It belonged to Samuel Barnett, Georgia’s first railroad commissioner in the 19th century.

Another is Robert Toombs’ white columned house. Toombs served as Davis’ secretary of state for a time, then resigned to lead the Confederate troops as a brigadier general.

Callaway Plantation looks like a small village with all of its buildings. In addition to the Greek Revival-style plantation house, there is a 1700s log cabin, a four-room Federal Plain-style house circa 1790, and the childhood home of former Governor George R. Gilmer. .

Washington’s historic hotel, the Fitzpatrick, is the perfect base for visiting these homes and more in the city.

Georgia offers a variety of interesting sites and places for visitors to explore:

The best Thanksgiving hangover cure is the winner!