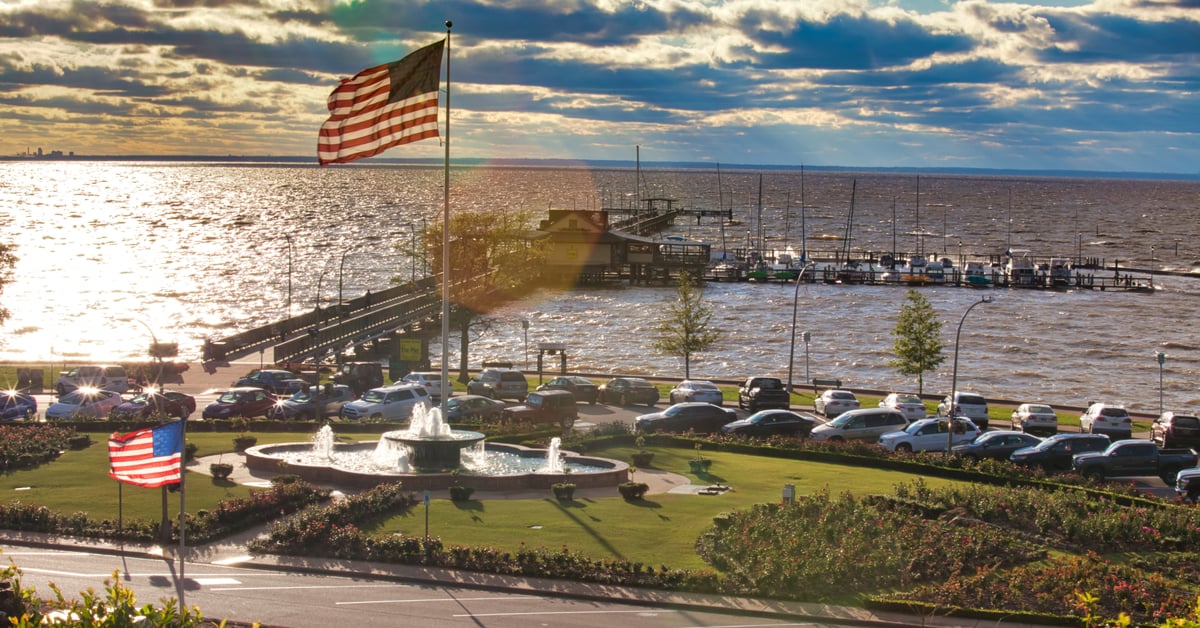 Right off the highways that crisscross Alabama, it’s a world far different from the electric and exciting vibe one finds in one of its four major cities. Along the state’s back roads and scenic highways, life slows down, and the people of the small towns that dot these roads welcome visitors to their world with pure Southern hospitality.

When traveling across the state on one of these freeways, take one of the exits and visit one of these charming little towns to experience this Southern hospitality for yourself.

On the eastern shore of Mobile Bay, where five rivers converge before emptying into the Gulf of Mexico, we find the town of Fairhope, a small coastal town that exudes southern charm and hospitality with a touch of life. contemporary mixed.

Fairhope is known for its simple pleasures, thriving arts scene, outdoor recreation, eclectic dining and shopping, and incredible sunrises and sunsets over the bay. Residents and visitors love kayaking in the bay and stopping at the municipal pier for a day of paddling with dolphins and maybe a manatee. Bring your own or rent one from the Fairhope Boat Company.

The artistic side of the city is highlighted during its annual Arts and Crafts festival. Held on the last weekend of April, the streets of the city are filled with music and hundreds of artisans from across the country.

One of the best times to visit Fairhope is during the Mardi Gras season, when the spirit of carnival comes to life. During the two-week celebration, numerous parades with gigantic ornate floats and masked revelers take to the streets throwing trinkets and Moon Pies at the excited crowd.

Located on the banks of the Chattahoochee River that forms the Georgia-Alabama border, the city of Eufaula lives up to its nickname – “a city whose future is tied to its past.”

Eufaula is well known for its beautifully restored houses featuring architecture from the late Victorian to Gothic Revival era. The Seth Lore and the historic Irwinton district highlight many of these homes built between 1825 and 1949. Be sure to visit Fendall Hall with its ornate Italian marble fireplaces and entrance floor and the Shorter Mansion with its impressive 17 freestanding columns and is the home of the Historical Museum of Eufaula.

Eufaula is also known for its excellent fishing in the 41,000 acre reservoir formed by Walter F. George Dam. It’s not for nothing that it is called the â€œBass Capital of the Worldâ€! And

Bird watchers will want to visit the Eufaula National Wildlife Refuge, an 11,184 acre patchwork of wetlands and marshes that is home to over 300 species of birds as well as 40 species of mammals, fish and reptiles, including alligators.

Dining is the gamble at Eufaula, from â€œupscale Southern cuisineâ€ to the River City Grill to the more family-friendly Barb’s Country Kitchen.

Eufaula’s restored historic homes open each year on one of the country’s oldest historic home tours, the Eufaula Pilgrimage, which takes place on the first weekend in April.

At the top of Lookout Mountain, the town of Fort Payne is a nature lover’s paradise. The waterfalls and the breathtaking panoramas are the great attractions of this small mountain community. Thirty miles of hiking and biking trails at DeSoto State Park take you to plenty of waterfalls while just down the road the views open up to the deepest canyon east of the Mississippi River, the National Preserve of Little River Canyon, the highest point of the reserve being the mighty Little River Falls.

But it’s not all about the great outdoors. Downtown Fort Payne is full of shops and restaurants that will allow you to spend a full day exploring on their own. And while you’re there, visit the museum that celebrates the city’s favorite sons, the 13-time Grammy Award-winning Alabama band from Fort Payne.

Just a few blocks from downtown Fort Payne is a fascinating and relatively undiscovered natural wonder, the Manitou Cave. The ancient cave features fascinating geological formations and evidence of Native American habitation hundreds of years ago. Reservations for a guided tour are required and the number of people allowed to enter the cave is limited to protect its history and the environment.

Known as the ‘Gateway to the Appalachians’, Mentone is a quaint mountain town where lush forests atop Lookout Mountain give way to breathtaking views and the downtown streets are lined with quirky shops and restaurants. farmers markets. It has an incredible array of cafes with menus ranging from Southern comfort food to Asian cuisine and everything in between.

Like its neighbor Fort Payne, Mentone is home to many beautiful waterfalls, especially the 104-foot-high DeSoto Falls where the water from the West Fork of Little River has carved out a spectacular canyon.

The town itself has beautiful rustic but well-appointed cabins and cottages where you can rest your tired head after a long day of exploring, many with wonderful views of the surrounding Southern Appalachian foothills.

Mentone also has a little surprise in store for snow lovers: a ski resort. Cloudmont Ski and Golf Resort is billed as the most southeastern ski resort in the country. When temperatures drop to 28 degrees or less (yes, it’s cold in Alabama), the snow begins and the 1,800-foot slope opens.

Tucked away in northwest Alabama, near the banks of the Tennessee River, lies the town of Tuscumbia, where its 200-year history makes it a fascinating destination.

Known as the ‘Charm of the Shoals’, Tuscumbia welcomes visitors with impressive pre-war architecture lining its streets. The restored historic downtown shops are welcoming and offer an eclectic range of products and dining experiences.

The city offers a lot to do and see. One of the main attractions is the city’s centerpiece, Spring Park, a beautiful sparkling spring-fed lake with a fountain dedicated to the wife of Indian chief Shawnee Tecumseh. The 51 fountain jets are synchronized with the music and the lights.

Within the park is the world’s largest man-made stone waterfall, Cold Water Falls. Every day, more than four million gallons of water tumble down the 42-foot-high masonry.

History abounds in Tuscumbia, including the birthplace of writer and activist Hellen Keller – Ivy Green, Coon Dog Cemetery with its unique tombstones and monuments to man’s best friend, and Alabama Music Hall of Fame where the story of the state’s music legends is honored and come to life.

For a unique dining experience, the place to go is the Rattlesnake Saloon. The restaurant and bar were built under a huge rock overhang and if there was a good rain a waterfall covers the top of the restaurant. Oh, and the food is great too.

For many, the sleepy little town of Monroeville, Alabama is Alabama’s own version of Mayberry with its laid-back atmosphere, super-friendly locals, and downtown with the gleaming white-domed courthouse as its centerpiece. But most people know the city as the “literary capital of Alabama,” and for good reason. It was here that author Harper Lee wrote the world famous novel, Kill a mockingbird.

As you stroll through the streets of Monroeville, the book comes to life as you visit the courthouse where the book’s fictional lawyer, Atticus Finch, defended Tom Robinson. Inside you’ll find the Monroe County Museum which honors the author as well as Harper Lee’s longtime friend Truman Capote, and the fascinating history of this southern town. ‘Alabama.

Plan your visit to Monroeville in April or May when the Mockingbird Players present their live version of Kill a mockingbird. The city becomes the epicenter of Southern literature on the first weekend of March of each year as writers and authors gather for the Monroeville Literary Festival. This is an opportunity for book lovers to meet and hear their favorite authors from the South.

The mention of Selma’s name brings to mind footage from 1965 and Bloody Sunday where a group of protesters gathered and began a march to the state capital to demand equal voting rights. After a brutal encounter with law enforcement on the Edmund Pettus Bridge, the marchers made their way to Montgomery and ultimately forced the Civil Rights Act through.

But Selma is much more than that fateful day in 1965. The city is steeped in history. Historic buildings dating from the late 1800s line the streets. The famous Selma Walton Theater, where vaudeville acts once performed in the early 1900s, still host concerts, plays and films. The Bridge Tender’s House, where the families who ran the Selma Bridge once lived, is now open for overnight stays along the river. And the only pre-war riverside hotel in the South East, the St. James has once again opened its doors to accommodation with comfortable rooms overlooking the river and a restaurant that serves delicious food. South “high”.

And then there are the beautiful churches that dot the streets with their ornate architecture, including the Brown AME Church where the walkers of the Selma March to Montgomery organized themselves and their wounds were subsequently treated.

The best time to visit Selma is in April, when tour guides lead you on free historical walking tours. Spring hikes are organized every year.

These small towns in Alabama, and many more, are a delightful surprise for visitors considering a trip to this southern state: