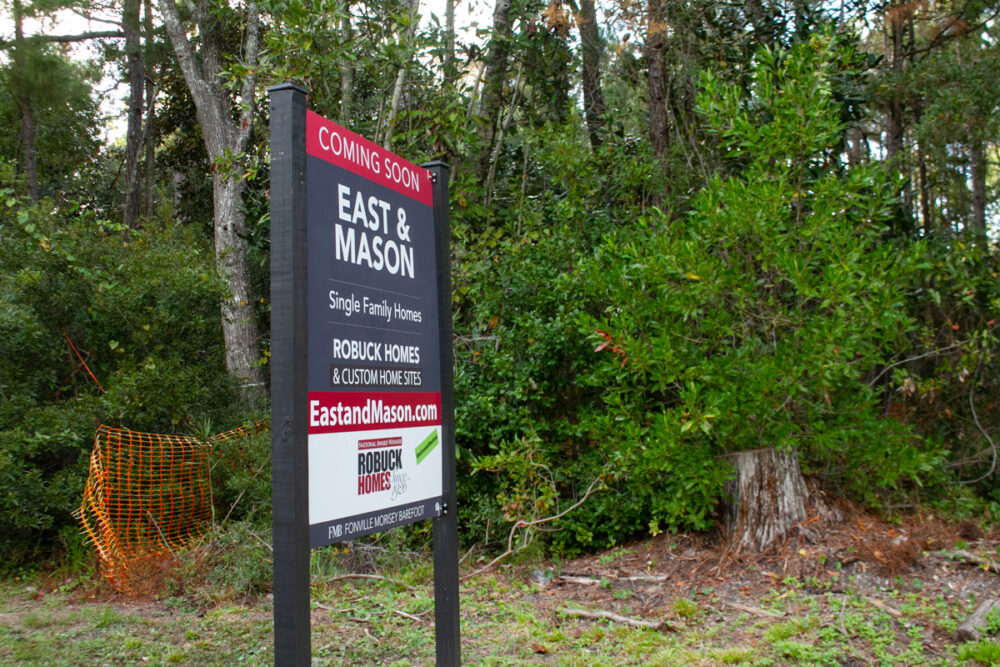 WILMINGTON – Builders in a coastal neighborhood in the Masonboro Sound area have been warned by county regulators, who recently ruled that erosion and sediment control measures at the site were apparently failing.

East & Mason, a subsidiary of Robuck Homes, is a planned community that will be parked on 64 acres across from the Atlantic Intracoastal Waterway. When fully constructed, the 170-home subdivision will add another passage between the Masonboro Loop and Masonboro Sound roads.

A representative for East & Mason acknowledged the New Hanover County notice of violation of October 18 and said in a statement that the problems at the site were the result of rainy events.

“East & Mason Developers takes its environmental obligations with local and state agencies very seriously,” the statement said. “We have corrected all issues identified after significant rainfall events over the past few weeks and are in the process of officially communicating with New Hanover County that we are complying.”

The site, purchased for $ 6.6 million last year, has been approved by the City of Wilmington for a density bonus, calling itself an “outstanding design project.” Marketing of the lots will begin at the end of this year and home construction could begin soon after, according to a September press release.

Once densely forested, the site was cleared earlier this year to make way for the residential project, which will include both single-family homes and townhouses.

An old cottage used as a servants’ quarters for a nearby pre-war vacation home is at the eastern end of the lot; Following negotiations, the Historic Wilmington Foundation placed an easement on the cottage, nicknamed the â€œdollhouseâ€, to preserve its exterior and the trees that surround it. The East & Mason property sits on the fringes of the historic Masonboro Sound District, where old cottages and mansions still exist, vestiges of previous centuries.

The notice of violation, signed by a soil erosion specialist within New Hanover County engineering, said there appeared to be a failure at the site to protect critical areas subject to accelerated erosion and â€œprotect property from damage caused by sedimentation and damage from erosionâ€.

The letter also implies that the builders have made progress in land disturbance activity outside the scope of their approved plan. According to the letter, it appears the approved site plan has been changed, but county engineering has not been notified of the updates.

Suggested repairs at the site included “removing sediment and rock from jurisdictional and off-site areas with buckets and shovels.”

The development company released details of its clubhouse and pool amenities in September. â€œThe clubhouse is designed to blend in with the coastal style community of East & Mason, with a modern farmhouse vibe to meet the new shore,â€ according to a press release.

Thirty lots are reserved for local custom builders, with the remainder to be developed by Robuck Homes, according to the company. Based in Raleigh, Robuck has built homes in over 63 communities.

“We are delighted to receive approval of our development plans so that we can begin construction as soon as possible,” Joe Cebina, of East & Mason Developers, said in the September press release.

All activities disturbing land of an acre or more in North Carolina are required to submit plans that address erosion and sediment control during the construction process, according to the Department of Environmental Quality of North Carolina. Erosion control helps protect streams from sediment, which can degrade water quality and impact habitats.

New Hanover County, like many other parts of the state, has been delegated the authority to enforce sediment control rules. Violation tickets aren’t often issued, county engineer Jim Iannucci told Port City Daily. Reviews do not come with automatic penalties or fines, unless they are left unanswered.

There have been a few other cases this year. Heavy rains led to a similar notice being sent to developers of a property anchored at Harris Teeter on Carolina Beach Road, and a residential development off Gordon Road has also been called in for poor sediment control measures.