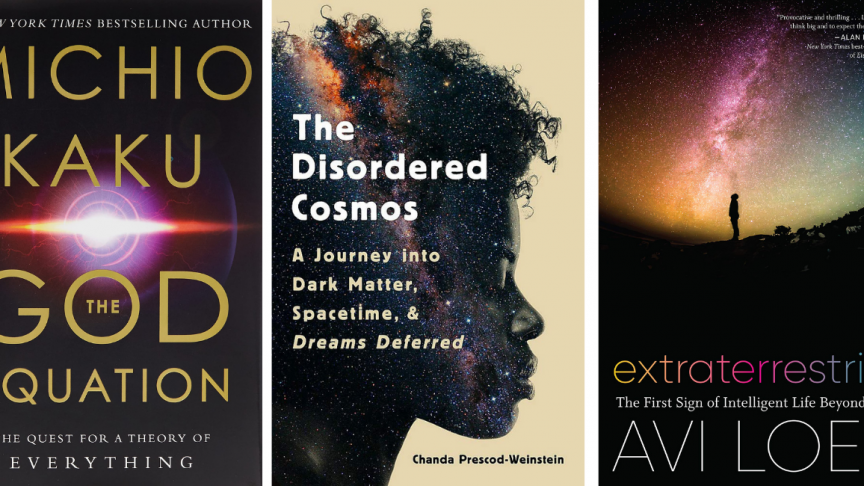 There is no better gift than a book for a loved one, especially during the holiday season. Just as you familiarize yourself with all the things on the world, sharing the wisdom you have learned from your favorite books is just as special. Especially in the past decade, moving closer to the acceptance of the idea of â€‹â€‹living on another planet and making another planet our home, has raised the need to know more about space. To do it in the best possible way, books written by top astrophysicists and experts in this field seem to be the most reliable option.

That’s why we’ve listed the best space books written to share your wisdom with your loved ones.

In late 2017, scientists at a Hawaiian observatory spotted an object hovering through our inner solar system, moving so fast it could only have come from another star. Senior Harvard astronomer Loeb has shown that it is not an asteroid because it moves too fast to be an asteroid and leaves no trace of debris or gas in its wake. In his book, Avi Loeb presents his controversial theory on the first interstellar object that visited our galaxy and takes you with him through the exciting story on the path of discovery.

With his book, renowned theoretical physicist and author of The future of the spirit and The future of humanity, Michio Kaku brings you the epic story that begins with the discovery of gravity and unveils the great journey on how the universe is created. He asks these questions such as “What happened before the Big Bang? “, “What’s on the other side of a black hole?” “,” Are there other universes and dimensions? “,” Is time travel possible? and makes you understand his point of view through his work and research.

The Disordered Cosmos is written by Chanda Prescod-Weinstein, who believes in a world where everyone should have access to information about the wonders of space and the universe. Sharing his love for physics, Prescod-Weinstein also points the finger at the standard model of particle physics, what’s behind it, and the latest dark matter theories. What’s magical is that she does it with a new perspective that informs you through the history, politics, and wisdom of Star Trek.

Neil deGrasse Tyson is aimed at an audience that wants to know more about the cosmic universe but is not able to, due to the hustle and bustle of everyday life. Leading astrophysicist Tyson guides you through the secrets of the universe, bringing you the answers to exciting questions about black holes, space and time, and our place in the universe.

Bill Bryson dedicates one of his greatest masterpieces to the challenge of understanding and possibly answering the most difficult questions about the universe and about ourselves. Throughout his book he tries to understand The Big Bang himself; what got us to where we are now. To do this, he seeks the help of the most advanced in the world archaeologists, anthropologists and mathematicians by visiting their offices, laboratories and field camps.

This enlightening new book by Neil deGrasse Tyson offers a unique approach to the mysteries and curiosities of the Cosmos, informing you through the rich material of his beloved StarTalk Podcast. He takes action to answer questions about hhow life began, and if we are alone in the universe through observations and theories.

The world’s most renowned physicist, Stephen Hawking, delves deeply into the question of how the universe began and goes beyond. It analyzes every inch of the universe that advanced science has been able to discover in our time. Told in plain language ordinary people can understand, Hawking reveals the exotic realms of black holes and quarks, antimatter, “Arrows of time”, and the Big Bang to take you on a journey of wonderful possibilities.

Cosmos: A Personal Voyage is one of the best-selling science books of all time because it answers all the questions we secretly ask ourselves. life on Earth and beyond. In his masterpiece, Sagan dives deep into billion years of cosmic evolution that transformed matter into consciousness, exploring different topics such as the origin of life, the human brain, Egyptian hieroglyphics, space missions, the death of the Sun, the evolution of galaxies , and the forces and individuals who have helped shape modern science.

Biocentrism gives birth to a new sense of possibilities and is full of lots of shocking new perspectives that you will never see reality the same way again. In this book, it is explained that life is not an accidental by-product of the laws of physics and that there is much more to it. Move from a physics to a biology perspective under expert guidance biologist and astronomer, biocentrism will definitely upset your idea of â€‹â€‹life, the universe and death.

Respected physics professor Halpern breaks down the great debate of the Big Bang and the never-ending quest to understand the fate of the universe in his book. Halpern writes on the discussion between American physicist George Gamow and British astrophysicist Fred Hoyle. While Gamow insisted that an explosion created the universe and its elements, Hoyle emits the idea that the universe is engaged in a process of endless growth. Whoever wins this debate, Halpern captures the point of view on both sides and will educate you on what you need to take away from this debate that shaped the idea of â€‹â€‹the Big Bang.

In this most popular astronomy book of all time, Consolmagno offers a fairly easy-to-follow guide to observing the wonders of the universe and space. In addition to giving all the necessary information about sky objects, it also has illustrations for you to understand and visualize the image of space. It is also suitable for outdoor use thanks to its large pages and spiral binding.

The book is based on the true story of black female NASA mathematicians, whose hard work and efforts resulted in the United States’ greatest achievements in the space race. This is the story of the real heroes, who did all the calculations with pens, pencils and calculating machines to launch rockets and astronauts into space.

Carl Sagan completes his glorious journey through space and time in his final sequel. He insists on the idea that the exploration and eventual colonization of other worlds is neither a fantasy nor a luxury but rather a necessary condition for the survival of the human race. To make it perfectly understandable, it begins with our first launch into space and delves deep into the future that awaits us in distant galaxies.

Interesting Engineering is a participant of the Amazon Services LLC associate program and various other affiliate programs, and as such there may be affiliate links to the products in this article. By clicking on the links and buying from partner sites, you not only get the material you need, but also support our website.

Own a property in JoCo? Prepare it for a close-up

The best Thanksgiving hangover cure is the winner!