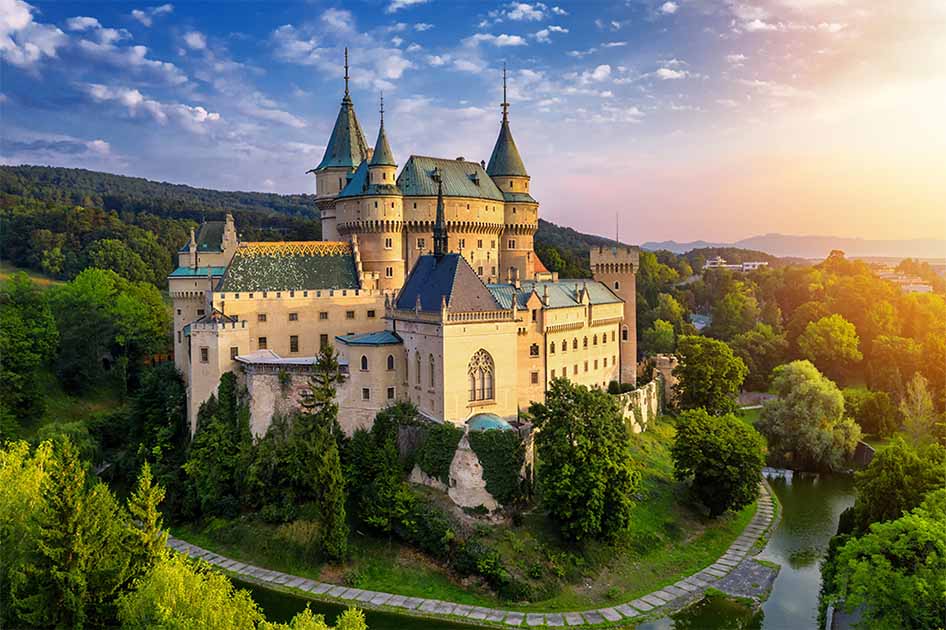 The castles we see in movies and picture books weren’t just inspired by fantasy and imagination. In most cases they were based on actual castles, many of which are in Europe. Stemming from the concept of walled cities, these castles were created to protect and resist attack, while exhibiting their power and dominance over the surrounding landscape. Strategically located, overlooking valleys, lakes and mountain passes, these stunning fairytale castles and fortifications are remnants of the influence of kings and queens throughout ancient history.

The medieval Eltz Castle , or Burg Eltz, Germany was established in the 12th century as part of the formidable Holy Roman Empire. After centuries of war, he remained unscathed perched on top of a rock in a small wooded valley. It has even belonged to the same family for over 800 years! ( Freesurfing /Adobe Stock)

The Alcazar of Segovia in Spain is the epitome of a fairy tale castle. Perched atop a cliff, this 12th-century castle is a UNESCO World Heritage Site and bears witness to the splendor of a bygone era. It even inspired Disney’s Snow White castle. ( pcalapre /Adobe Stock)

Hohenzollern Castle in Germany was once the ancestral seat of the Hohenzollern nobles. In the style of a typical medieval hilltop fortification, the neo-Gothic castle sits comfortably atop Berg Hohenzollern which rises 855 meters (2,805 feet) high. Nowadays it is a popular tourist destination, due to the stunning architecture of this 140-room fairytale castle. ( scalar /Adobe Stock)

The medieval fortified castle and the town of Mont Saint Michel was built on a rocky island off the northern coast of France. The town and castle featured in Disney’s Tangled was based on this fairytale castle, which is completely surrounded by water at high tide. ( JFL Photography /Adobe Stock)

Burg Berwartstein Castle is a real fairy tale castle hidden in the Palatinate Forest in southwestern Germany. First mentioned in 1152, this rock castle was built to defend the Palatinate in the Middle Ages, and some rooms, stairs and passageways were carved into the rock. ( vincent /Adobe Stock)

The magic Alhambra palace and fortress in Granada, Spain is one of the most stunning examples of Islamic architecture. Built overlooking the Albaicín quarter of Granada between 1238 and 1358, it was the royal residence of the Nasrid Moorish dynasty and is known for its stunning decoration and fairytale gardens, filled with roses, oranges and elms . ( Taiga /Adobe Stock)

The 19th century Neuschwanstein Castle , which means “New Swan Castle”, in the German Bavarian Alps, was built by Ludwig II and inspired by Wagner’s operas. Built on a rugged cliff overlooking the surrounding valley, Ludwig wrote to Wagner “the location is one of the most beautiful to be found, holy and inaccessible”. It also served as the inspiration for Disney’s 1959 animated film Sleeping Beauty. ( pilat666 /Adobe Stock)

Hluboká Castle in the Czech Republic is a magnificent 13th-century fairytale castle built in the Gothic style. Over the centuries it has been rebuilt several times, and in 1871 it was remodeled in the style of British Windsor Castle. It has 140 rooms, eleven towers and sumptuous interiors. ( Vilam /Adobe Stock)

The picturesque fairy tale Ch aThe teau de Chillon, or Château de Chillon, on Lake Geneva in Switzerland is an island castle said to have been built in the 11th or 12th century. Today it is one of the most visited monuments in Switzerland, famous worldwide for its beauty and for being the former residence of the counts of Savoy. (Gilles Laurent / CC BY-SA 4.0 )

Top image: The medieval castle of Bojnice in Slovakia is one of many real fairy tale castles in Europe. Source: radu79 /Adobe Stock